Gruden: ‘I hope I’m a candidate’ for Raiders job 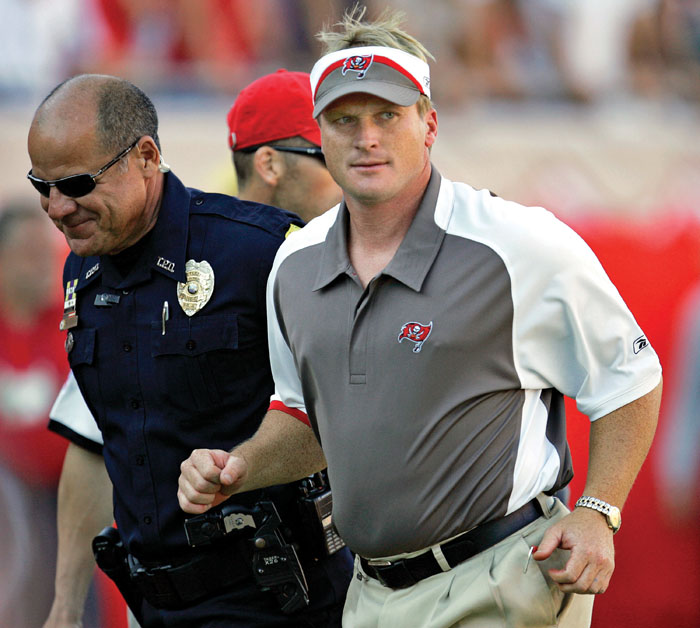 FILE - In this Sunday Nov. 4, 2007 file photo, Tampa Bay Buccaneers head coach Jon Gruden, right, leaves the field after an NFL football game against the Arizona Cardinals in Tampa, Fla. Jon Gruden says he hopes he's a candidate to return for a second stint as coach of the Oakland Raiders and believes a final decision will be made next week. Gruden made his most specific comments about the opening in Oakland created when the Raiders fired Jack Del Rio following a disappointing six-win season in an interview Tuesday, Jan. 2, 2018 with the Bay Area News Group. (AP Photo/Chris O'Meara, File)

ALAMEDA, Calif. (AP) — Jon Gruden hopes he’s a candidate to return for a second stint as coach of the Oakland Raiders and believes a final decision will be made next week.

Gruden made his most specific comments about the opening in Oakland in an interview Tuesday with the Bay Area News Group . The Raiders fired coach Jack Del Rio on Sunday following a disappointing six-win season

“My understanding is they’re interviewing candidates this week and they’re going to let everybody know sometime early next week or whenever they make their decision,” Gruden told the paper.

When asked specifically if he was a candidate, Gruden replied: “Well, I think I am being considered, yes. I hope I’m a candidate.”

The Raiders are not commenting on the search beyond a statement issued Sunday night from owner Mark Davis thanking Del Rio for his tenure.

Gruden’s tenure ended shortly after the “Tuck Rule” loss to the New England Patriots when he was traded the following month to Tampa Bay for two first-round draft picks, two second-rounders and $8 million.

Gruden has spent the past nine seasons working as an announcer for ESPN and is scheduled to work the playoff game Saturday in Kansas City between the Chiefs and Tennessee Titans. ESPN first reported the likelihood of Gruden returning to Oakland on the eve of the season finale that Oakland lost.

Del Rio was fired following the 30-10 defeat to the Chargers, leading to the current search.

The Raiders will be required to comply with the “Rooney Rule” and interview at least one minority candidate or otherwise face discipline from the NFL.

John Wooten, the head of the Fritz Pollard Alliance which monitors the NFL’s minority hiring, said he is confident the Raiders will follow the rules and doesn’t consider the process a sham despite reports Gruden would get the job before it even opened.

Wooten pointed to the Raiders’ history under late owner Al Davis and his son, Mark, in hiring minority candidates, from making Art Shell the first African-American head coach in modern NFL history in 1989 and then bringing him back for a second stint in 2006.

Tom Flores was the first Hispanic coach to win a Super Bowl and the team also hired Hue Jackson as coach in 2011 and currently employs Reggie McKenzie as general manager.

“I trust the integrity of Mark Davis and Reggie and what they have done,” Pollard said. “I trust they will follow the rule and I believe that.”

Golf: Woods’ back among top questions in new year