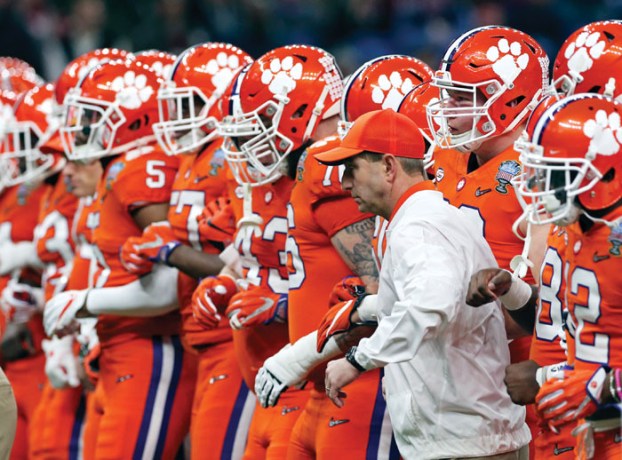 Dabo Swinney promises disappointed Clemson will be back

Clemson coach Dabo Swinney had a strong message to deliver soon after his top-ranked Tigers were eliminated from the College Football Playoff — the run is not over.

Clemson, without NFL first-rounders in quarterback Deshaun Watson and receiver Mike Williams, were picked second in the ACC Atlantic this past summer. But the revamped Tigers rolled to a third consecutive Atlantic Coast Conference title and berth in College Football Playoff.

Clemson fell to No. 4 Alabama 24-6, its new faces on offense finally looking overmatched with something to learn against the Crimson Tides’ suffocating defense.

It was a disappointment for sure, Swinney said. But one the team will learn from, grow from and return from.

Particularly on offense where quarterback Kelly Bryant,tailback Travis Etienne and receivers Ray-Ray McCloud, Tee Higgins and Amari Rodgers will have another year of experience. Bryant filled in capably for Watson, leading a changed attack that saw more emphasis on the ground instead of the air as Watson did in Clemson’s national title season of 2016. Guard Taylor Hearn has said he’ll go pro instead of playing a final season with the Tigers.

Defense could be a bit trickier, depending on how many of Clemson’s defensive line opts for the NFL. Defensive end Clelin Ferrell, the team’s sacks leader this fall, and tackle Christian Wilkins are consensus first-round draft picks. Defensive end Austin Bryant, another underclassmen, is also weighing his options. The only certain to return is disruptive tackle Dexter Lawrence, a junior.

Players have until January 15 to declare for the NFL draft.

Bryant, who was second on the Tigers with 11 rushing touchdowns, was upset about the defeat. He had little doubt, though, about his team’s resolve heading into next year.

“The mindset over there,” he said of the Tigers. “We stick together.”

Some things to watch at Clemson this offseason:

NFL DECISIONS: Wilkins, Ferrell and Bryant are not the only underclassmen considering whether to stay or go. All ACC tackle Mitch Hyatt, receiver Deon Cain, safety Van Smith and linebacker Kendall Joseph are all weighing their options. Most all in the postgame interviews said they were heading home for a few days to talk over their futures with their families before choosing. Wilkins, who has graduated, is a junior who asked to be honored with seniors on Clemson’s senior day against Citadel on Nov. 18.

QB BATTLE? Expect a healthy debate — at least among fans — about the starting quarterback job this offseason. While Bryant has excelled this year, many supporters are looking to incoming freshman Trevor Lawrence to supplant the senior next fall. Lawrence was rated the No. 1 overall prospect coming out of Cartersville High in Georgia. Swinney is loyal to upperclassmen, but may have regretted not starting then-freshman Deshaun Watson from game one in 2014 instead of senior Cole Stout in early losses at Georgia and Florida State. Watson took over after that.

LEADERSHIP STABILITY: Don’t look for significant change in Clemson’s coaching staff as it looks like the Tigers will head into spring camp with its three prime coordinators — Brent Venables on defense, Tony Elliott and Jeff Scott on offense — in place. Each member of the trio was mentioned as potential candidates as coaching jobs came open, but ultimately stayed put. Venables will get to coach his son, linebacker Jake, next fall. Elliott and Scott both believe they’ve got more to learn as coordinators before taking a head coaching job.

ETN: Look for Travis Etienne to take full control of the running back spot next fall. Etienne was a freshman — and one of Clemson’s last recruits in the winter of 2017 — who showed breakaway speed and tackle-breaking abilities to lead the Tigers with 766 yards and a school freshman record of 13 touchdowns. He got lost in blocking schemes at times, but count on that to improve under running backs coach Tony Elliott.

RELOADING: Quarterback Trevor Lawrence isn’t the only five stars to join the Tigers next year. Clemson will feature defensive ends Xavier Thomas and K.J. Henry and offensive lineman Jackson Carman. Lawrence was the state of Georgia’s No. 1 prospect, while Thomas held that distinction in Florida, Henry in North Carolina and Carman in Ohio.