Chiefs’ Smith could be playing for legacy in playoffs 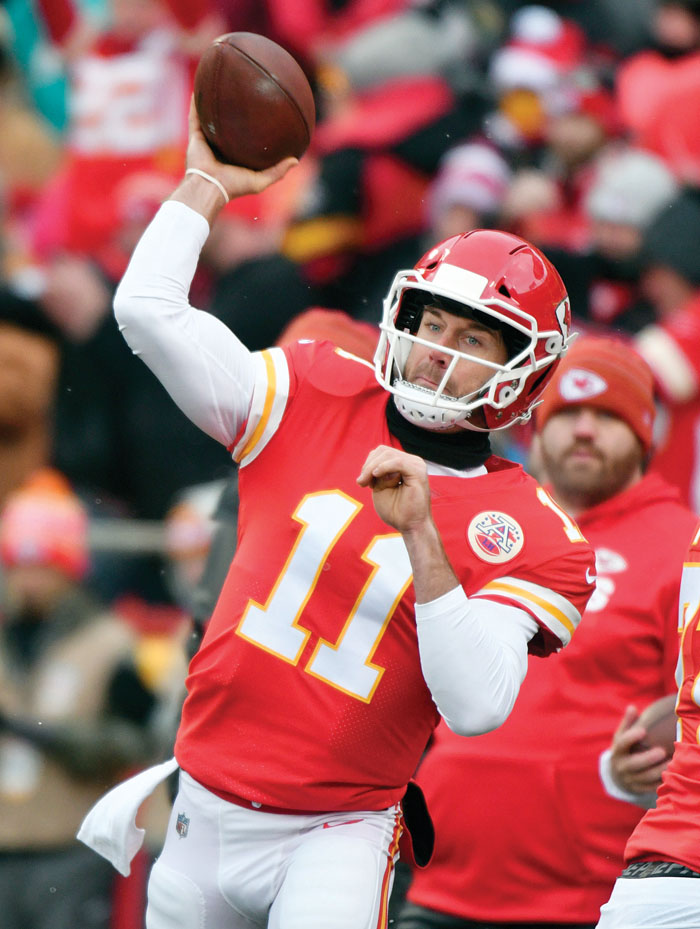 By DAVE SKRETTA, AP Sports Writer
KANSAS CITY, Mo. (AP) — There is little disputing Alex Smith has had the best season of his 13-year professional career, whether you want to quantify that claim with individual stats or team success.
He’s set career bests in yards passing and touchdowns. He threw just five interceptions. He led the league in quarterback rating.
And he led the Kansas City Chiefs to the AFC West title, giving the franchise back-to-back division championships for the first time.
All of that success could be forgotten as quickly as Saturday night, though.
That’s when the Chiefs play the Titans in the playoffs.
Kansas City hasn’t won a home playoff game in nearly a quarter century, a maddening drought that Smith can help to end with a victory at Arrowhead Stadium.
And in doing so, Smith would turn what has been a largely successful five-year tenure with the Chiefs into a memorable one, elevating him from a cluster of merely good quarterbacks to an echelon where only Len Dawson currently resides.
“Everybody is good at this point, right? Everybody still left playing is really good,” said Smith, who already snapped the Chiefs’ long postseason winless streak with a victory in Houston two years ago. “The season is on the line, you win or go home. I think that adds to the intensity.”
Especially considering Smith doesn’t know where home will be pretty soon.
The cash-strapped Chiefs could be forced to release Smith and turn the future of the franchise over to first-round pick Patrick Mahomes II next season.
Smith watched his understudy lead the Chiefs to a victory in Denver last weekend, sitting out the regular-season finale with nothing on the line.
So, the playoffs could also serve as Smith’s audition for other teams, a pressure-packed chance to show that the 33-year-old former No. 1 pick is only now reaching his peak.
“The ramifications are so big,” he said, “but it’s still football at the end of the day.”
History suggests that Smith tends to rise to the occasion.
Even though he’s just 2-4 in the playoffs, and 1-3 as the quarterback in Kansas City, the losses have largely come despite his performance.
One of his best statistical games came in a shootout loss in Indianapolis in 2013, when he threw for 378 yards and four touchdowns without a pick, and Smith was relatively efficient in a cold loss to the Steelers that ended last season.
Chiefs coach Andy Reid mostly wrote off the idea of playoff experience helping on Wednesday, but he acknowledged that quarterback may be the one position where it’s at least a little beneficial.
“Alex has been there, done well there,” Reid said. “I can’t tell you we sit there and evaluate that. We have Alex, we build on what he does and kind of go with it.”
One area Smith hasn’t done well: Playing against the Titans.
Few other teams in the NFL have given him fits as Tennessee, which has beaten him three out of four meetings. The past two have been at Arrowhead Stadium, which is supposed to provide the home team — and especially the home quarterback — a distinct advantage.
But he was 19 of 35 for 202 yards with a touchdown and three picks in a September 2014 loss, and just 15 of 28 for 163 yards with a pick and no touchdowns in a December 2016 defeat.
Most of the Titans’ coaches and personnel from that game will be back on Saturday.
“It’s hard to go beyond this last year,” Smith said. “Close game, came down to the end — physical game. But beyond that it’s hard to read too much into those. You learn from that a little bit, but there’s the whole chess game. New players, new schemes. Things like that.”
New stakes, too. That game that Tennessee won on Ryan Succop’s field goal last season was late in the regular season, and this one is the win-or-else wild-card round of the playoffs.
NOTES: The Chiefs put WR De’Anthony Thomas (broken leg) and RB Akeem Hunt (ankle) on injured reserve. They elevated WR Marcus Kemp from the practice squad and signed RB C.J. Spiller, who has been on and off the roster much of the season. … WR Albert Wilson (hamstring), CB Phillip Gaines, DL Jarvis Jenkins (knee) and DT Rakeem Nunez-Roches (ankle) missed Tuesday’s practice.
___
For more NFL coverage: http://www.pro32.ap.org and http://www.twitter.com/AP_NFL