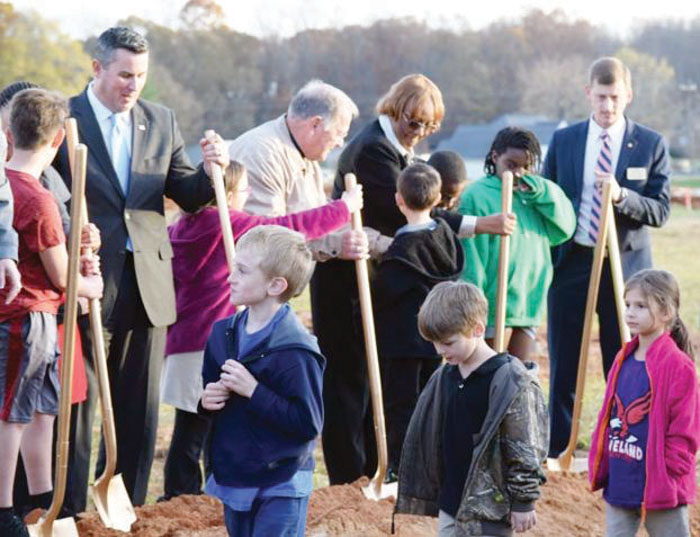 In 2018, West Rowan Elementary School will become the newest school in the Rowan-Salisbury school system.

The new school will combine students at Cleveland and Woodleaf elementary schools. Once the building is complete, the older schools will close.

School system officials have been discussing the possibility of a merger since 2008. Both buildings are nearly a century old, and Woodleaf Elementary has only one working well.

Talks of a merger were put on pause after a community outcry, but in 2014, the problems grew so great that the issue could no longer be ignored, and the Rowan-Salisbury Board of Education pushed the decision through.

Initially, the new school was going to be in neutral territory on a parcel at the corner of U.S. 801 and Godbey Road. But safety concerns about heavy traffic on 801 and a nearby power plant pushed school officials to look elsewhere.

They eventually settled on a site directly behind the current Cleveland Elementary School. The school remains in session while construction churns behind it. The Board of Education has discussed the possibility of demolishing the old building.

Construction crews broke ground on the $27 million, 100,000-square-foot building in late 2017. The project has an estimated finishing date of December 2018 or January 2019. West Rowan Elementary will have a core capacity of nearly 800 students, though its student body will number about 650.

School officials have high hopes that the new school will help unify the Woodleaf-Cleveland area and that students at West Rowan Elementary will see themselves as members of the larger whole that is the West Rowan community.

And, like its predecessors, the hope is that West Rowan Elementary will serve its community for generations to come.

Who would play you in a movie: Alnwick Castle, famous for its roll as Hogwarts in the Harry Potter movies. I know we look nothing alike, but it’s just a dream of mine.

What would you want for your last meal: I hope the last meal ever served in my lunchroom, whatever it may be, involves strawberries from Patterson Farms, yum!

Biggest challenge for the year ahead: Keeping to my construction deadline and budget.

Biggest hope for the year ahead: God willing, I’ll open my doors before the year is out.

Who will you be watching in 2018: All the students who will be attending. I can’t wait to meet them, watch them grow and make memories with them.

Reaction to being named as one to watch: I’m happy, and hope that I’ll be a school worth watching for many years.