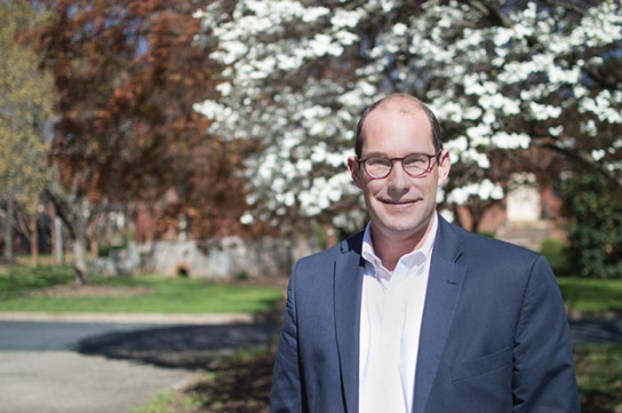 10 to watch: Jason Walser: ‘We have a very deep bench’ in Rowan

SALISBURY — As he settles into his new position as executive director of the Blanche and Julian Robertson Family Foundation, Jason Walser says the high-profile nonprofit organization will focus on three major areas in 2018.

As always, the foundation and its board will continue to assist many community projects through its grant process. Since its founding in 1997, the Robertson Foundation has given away more than $34 million to local nonprofit groups and governments.

The foundation also will maintain its keen interest in the development of Bell Tower Green, the name given to a downtown park planned for the the city square bounded by West Innes, South Church, West Fisher and South Jackson streets.

In the months to come, asphalt parking lots will be removed, and the park building process will start, overseen by a separate entity called Bell Tower Green Inc., of which Walser is a member.

“It may take several years before everything is in place, but that will be moving into fast motion in the very near future,” Walser said.

The foundation’s third area of focus will be trying to bring improvements to the West End. The foundation already has announced funding for a new teen center at Miller Recreation Center. It also will be looking at housing initiatives and other quality-of-life programs for the West End, Walser said.

Walser is a former executive director of the LandTrust for Central North Carolina.

What’s your favorite book? “Stand Up That Mountain” by Jay E. Leutze. “It is a wonderful conglomeration of relationships, community and sustainability. And it is set in Avery County.”

Who should play you in a movie? “I want to say Colin Firth, because my wife thinks he is ‘a really good actor.’ But I think that most of my friends would say that Jason Alexander would be the more appropriate answer.”

What would you want for your last meal? “Whatever Chef Santos has as a special that night.”

What’s your biggest personal challenge in the year ahead? Finding funds for the West End neighborhood of Salisbury and contributing to elevating public education in Rowan County and North Carolina.

What’s your biggest hope or aspiration for 2018? To be part of ensuring that the Bell Tower Green park becomes a reality in 2018/2019.

Who will you be watching in 2018? Mayor Al Heggins. “I think she has tremendous potential to help Salisbury and Rowan County move forward.”

What’s your reaction to being named one of the “10 To Watch”? “Unworthy. I could name 10 to 20 people in 20 seconds who are more worthy of this distinction than I. But I am humbled as well. I believe that ‘it takes as village,’ and we have a pretty remarkable village here in Rowan County. We have a very deep bench and should be grateful for that.”

Brave Salisburians gathered in the cold Sunday night to welcome in 2018 at one of Salisbury’s iconic landmarks, the Bell Tower at... read more