New Year celebration at the Bell Tower rings in 2018 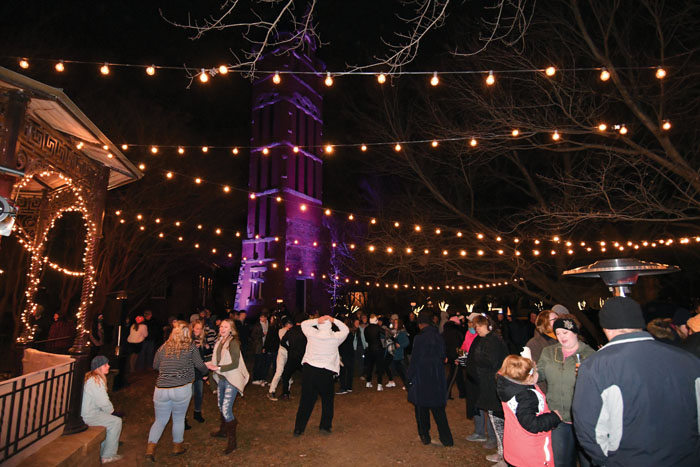 SALISBURY — A chilling wave of arctic air swept over Rowan County on Sunday, but it didn’t stop local residents from ringing in the New Year — literally.

Vivian Koontz, city parks and recreation programmer, estimates that this is the fifth or sixth year the City of Salisbury has played host to New Year’s at the Bell Tower on the corner of West Innes and Jackson streets, but it’s only the second year attendees have been able to make the historic landmark’s bell peal.

The 2016 celebration was the first time the bell had been run in nearly a decade. Now, Koontz and others are hoping to make it an annual tradition.

“We’re really excited about being able to ring the bell,” Koontz said.

Newly completed renovations mean that citizens were invited inside the structure to pull the bell rope themselves.

Below freezing temperatures and a fierce wind chill meant that crowds were slim early on in the evening. But Koontz had hope.

“I figure a lot of people will wait until it gets closer to midnight,” she said, an hour into the three-hour event. “…There’s been a lot of excitement about it — it’s just very, very cold.”

And the cold was something Koontz said she hadn’t bargained on.

“You always get excited when you see clear skies,” she said. “But you don’t necessarily think about the temperature.”

To combat the frigid night, Koontz requested more outdoor heaters, which were placed strategically around the Bell Tower grounds. Early partygoers huddled around the stands in groups, chatting and enjoying live music by Live House.

Dianisha Leonard said she and son, Jeffery, 9, decided to brave the cold because “it is New Year’s Eve.”

Leonard lives in Concord, but heard about the event and thought it would be a fun night for the two of them. A widow of eight years, Leonard said she and her late husband used to have set New Year’s traditions — but now, she and Jeffery find something new each year.

“Now that it’s just the two of us, we kind of do our own thing,” she said.

After discussing it with his mom, Jeffery said his New Year’s resolution was to do better in school.

Leonard said her resolutions were to take better care of herself, and to spend more time with friends.

But some people are choosing to forego the tried and true year-end tradition.

“I normally have a resolution to not have any resolutions at the end of the year, that way I don’t disappoint myself,” David MacArthur joked.

He and wife Lisa came to the Bell Tower with grandson Xzavier, 9. Lisa said she saw it posted on Facebook, and it had seemed like a fun, family-friendly event.

“Only at the time we didn’t know it would be so cold,” she said.

The family wasn’t sure if they would stay out until midnight, and said they may leave early if they or Xzavier got too cold.

But across the small park, Michael Snyder, along with his daughter, Bayleigh, and girlfriend, Jennifer, and her son, Ethan, were determined to stick it out.

“I plan on staying until I hear that bell ring,” he said.

Snyder said he also heard about the event through Facebook.

“We were looking for something to do other than sit at home and watch the ball drop,” he said. “…And what better thing to do than come out and support the local community?”

Snyder said he was enjoying the atmosphere, and the kids were having fun. And as for his resolution?

And by half an hour till midnight, Koontz’s prediction proved true as people flooded into the small park and took to dancing in front of the lit gazebo to welcome the new year.

Koontz said she wanted to extend her thanks to Salisbury police, fire and public services, who helped out with the event. The celebration was sponsored by Novant Health Rowan Medical Center and Miller Davis.