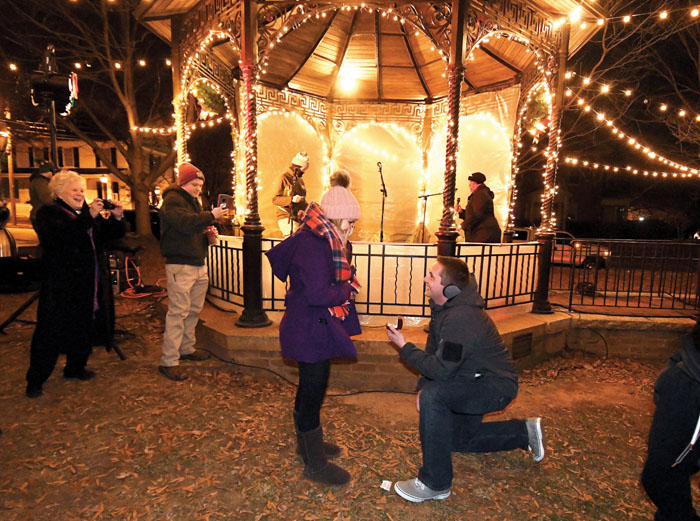 JON C. LAKEY / SALISBURY POST Brittany Parrish was surprised with a marriage proposal by her boyfriend Casey Stiller at the stroke of midnight. Revelers gathered at the Historic Bell Tower in downtown Salisbury to ring in the New Year of 2018.

SALISBURY — As the clock struck midnight, Casey Stiller pulled longtime girlfriend Brittany Parrish towards the gazebo in Bell Tower Park and knelt on the cold winter ground. Then, he pulled out a ring.

Over the cheers, shouts of “Happy New Year!” and the peal of the old tower bell, Brittany nodded — yes, she would.

Casey pulled her into a kiss under the soft strings of lights.

Casey and Brittany have been dating for four years, Casey said, and he’s been planning the engagement for months. The couple met in college, while pursuing degrees at Rowan-Cabarrus Community College. The two shared a math class during Casey’s first semester.

“I saw her and she didn’t notice me, but I noticed her,” he remembers.

He said he made it a goal to try and get Brittany’s attention. Between classes, Casey and his friends sat at a table in the student center not too far from Brittany’s group.

“I would just walk, just make sure that she noticed me,” he said.

Eventually, one of Brittany’s friends recognized him from the math class, and invited him over. Shortly after, Casey said he confessed to one of his friends.

Casey was successful in gaining Parrish’s attention, and soon the two were talking and trading text messages back and forth. On Oct. 26, 2013, the couple went on their first date — a day Casey remembers vividly, because a hit and run crushed his passenger side door before he went to pick Brittany up; and because he managed to mess up her father’s front lawn with his tires.

Casey said he was sure Brittany would never call him back after that.

“I thought, ‘I’m never gonna see this girl ever again in my life,’” he recalled.

Thinking back on that first date, Brittany said she never would have thought she’d end up here.

But four years later, the couple is still together, and the two are saving up to build a house.

After they started dating, the two discovered that they were in the same pre-school together, at First United Church of Christ.

“We just watched home videos this Christmas and she’s in the videos,” he said.

Casey said he loves Brittany’s easy-going nature, and her willingness to be spontaneous.

“She’s always down to do anything, everything,” he said.

And he also admires her warmth and caring for others.

“She’s just very compassionate,” Casey said. “When I saw how much compassion she has for people, that’s when I knew.”

Brittany said she loves that Casey is a fun and caring person who makes her laugh.

Casey purchased the engagement ring six months ago, and has been a bundle of nerves ever since. But he knew he wanted to propose on New Year’s Eve because the day has special significance for the two of them.

“That’s when we told each other we loved each other for the first time was New Year’s Eve four years ago,” he said.

“So that kind of makes this more special,” Brittany said.

Now, Casey works for City of Salisbury as a firefighter, and Brittany works for Rowan Diagnostic Clinic. The two are looking forward to their future.

“We’re just waiting on our next step,” Casey said.

For the two of them, that means tying the knot. Surrounded by friends and family, Brittany smiled.