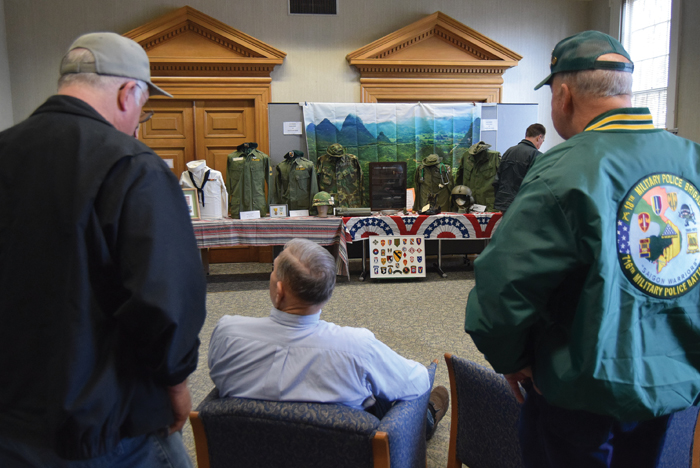 “We couldn’t do a grand scale one,” South Branch Supervisor Laurie Lyda said, “… but we could do our version.”

The event was the grand finale of a special programming arc centered around the Vietnam War that started when the Rowan Public Library won a special grant from the American Library Association. The association, in conjunction with WETA in Washington, distributed programming kits for “The Vietnam War,” a 10-part documentary film by Ken Burns and Lynn Novick that aired on PBS this fall, to select locations.

The Rowan Public Library was one of only two public libraries in North Carolina to receive the honor.

Lyda said that as soon as the library began planning the documentary viewing and surrounding events, staff knew they wanted to hold a welcome home celebration.

“We just thought it would be a good way to recognize and honor everyone,” she said.

Especially in Rowan County, which has a high veteran population thanks to the VA Medical Center. Many local veterans are involved in the community: participating in events or supporting their fellow veterans with weekly coffee meet-ups or other events.

Lyda said that over the course of the programming arc, she’s gotten a chance to get to know several veterans, and to hear their stories. She said she was struck by “The things they’ve witnessed, the things they deal with still.”

For Vietnam veteran Carroll Owen, it was an empty airport that sticks out most in his memory.

“When I got home from Vietnam the only person there to greet me at the airport was my wife,” he remembered.

Drafted at 23 and sent to fight in a war many would later term “useless,” Owen said when he returned home he wished there had been a crowd, or an event there to acknowledge the things he and others had to go through.

But events like Saturday’s are helping restore his hope.

“It is so overdue. … It is really, really nice — comforting — to know that people are finally recognizing the sacrifices we made in Vietnam,” he said.

Just like the old adage, war in Vietnam was hell, Owen said, and he still suffers nightmares from the experience. But he also brought something else back with him — home videos from his time overseas, featuring camp life, his fellow soldiers and the friends he made among local villagers.

“I didn’t know how valuable that would become to me,” he said.

The old movies have helped him heal, and helped him move on from the war. The videos were showcased at Saturday’s event, along with a photography exhibit featuring photos from the personal collections of local veterans, “Through a Soldier’s Eyes: Remembering Vietnam.”

“It lets me know that people are thinking about what we did,” he said.

Smith is a native of Kannapolis, and said he attends local veterans coffee events. But he appreciates the acknowledgement of what he, and others, went through.

Smith said he recently turned 70 over the summer, and on his birthday he turned to his sister and said:

Saturday’s event also featured guest speaker Tom Harrell. Harrell is a World War II veteran who is active in his church and community and was recently inducted into the Order of the Long Leaf Pine, an award conferred by the governor that recognizes exemplary public service in the state.

Other events in the programming arc have included “The Times They Are A-Changin’,” which featured the work of students in Theresa Pierce’s Rowan County Early College High School world history class, as well as themed exhibits.

“While working on this programming arc, I’ve learned so much from the veterans I’ve met. All of their stories are so important, and I’m glad to be a part of programming that allows those stories to be shared,” Lyda said.