The good stuff: 2017 was filled with stories off the beaten path 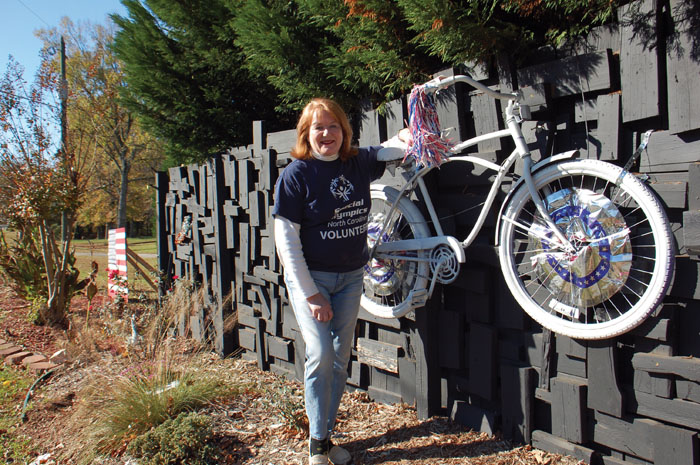 Mark Wineka/Salisbury Post file photo One of the things that usually catches people’s attention about Lee Wagoner’s fence along Jake Alexander Boulevard is the painted bicycle, which over time has been painted different colors, including purple, pink and white.

SALISBURY — Never has so much attention been given to a fence.

Many motorists have seen it along Jake Alexander Boulevard, not far from the Faith Road intersection. Lee Wagoner uses it as her canvas. With different sizes of boards, she gave the tall fence a three-dimensional texture.

But she didn’t stop there. She has attached things such as bicycles to it, and she decorates the fence with seasonal and holiday themes, from the Fourth of July to Christmas. Wagoner also has used it as a way to express support for a loved one with breast cancer.

She once affixed 100 signed, pink hearts to the fence so her daughter-in-law, Amy Wagoner, could look at them from across the road every day.

Why do this? Why put so much energy, time and talent into a regular old fence?

Wagoner answers the question with one of her own.

“Why do we have to be boring?’ she asks.

Wagoner and her fence were among many of the reminders in 2017 that beyond the daily news of violence, drug abuse, political discord, personal tragedy, natural disaster and discrimination are stories of love, triumph, caring, friendship, accomplishment, kindness and perseverance.

What follows are capsule summaries of a few of those kinds of stories the Post shared in 2017. Feel free to search them online and read them again.

• In January, thanks to a partnership between Wade Jurney Homes and Homes on the Homefront, Army veterans Gary and Shay Mason were given the key to their newly constructed, mortgage-free house in Salisbury.

At the front door, all the Mason family members took off their shoes and for the first time walked into their three-bedroom, two-bathroom house of 1,513 square feet in the new Corbin Acres subdivision.

• On June 16, 2015, a young Henderson Lentz collapsed during a basketball camp at Catawba College. He lay on the floor unresponsive — his heart barely beating — for 12 minutes while a team of people worked frantically and successfully to revive him.

To honor “Hendo’s Heroes,” as Lentz came to call them, the teenager purchased a defibrillator for North Rowan High School, where he starred as a senior in basketball and baseball.

Before presenting the school with the unit in January, Lentz hosted several fundraisers, including “Hendo’s Hope, to raise the necessary $1,500. He also has appeared at churches, basketball camps, and Fellowship of Christian Athletes meetings to share his experience.

“If you come with an open heart,” said Henderson’s mother, Jill, “God will use you.”

Down the line, those bags were vacuum-sealed and packed into waiting cardboard boxes.

Each time a box was topped off, taped up and carted out the doors, the students let out a cheer. Working in shifts that day, they ended up packing 26,000 Feed the Hunger meals for needy children in Haiti.

On April 20, Hylton became the oldest patient at Presbyterian Hospital in Charlotte to have a new procedure replacing a blocked heart valve.

The new procedure was less invasive than open-heart surgery. Transcatheter aortic valve replacement uses a catheter inserted through the groin to put a valve inside the diseased one.

Without the procedure, his doctor told him, Hylton would have had about six months to live. He took the chance, and the new valve started working immediately.

• In 2010, what locals called Spencer Woods were in danger of being harvested for timber.

But the weekend before the 80-year-old trees were supposed to be cut down, it snowed. Otherwise, the lumber company would have started cutting that following Monday morning.

Concerned citizens used the extra time to solicit the help of the LandTrust for Central North Carolina. Fast forward, and Spencer Woods was newly dedicated in June as the Fred and Alice Stanback Educational Forest and Nature Preserve.

The new park at the end of 11th Street in Spencer takes in 53 acres with 2.5 miles of trails, two shelters, a small pond and floating dock.

• Students ranging from elementary to high schoolers — and all of different skill levels — participated in Salisbury Symphony’s Summer Strings Camp in June.

When people donate to the symphony, Executive Director James Harvey explained, programs such as the summer strings camp are the result. Donations allow students to attend on scholarship, free of charge, and to “rent” symphony instruments.

• The CPR instruction at Lutheran Services Carolinas took just over an hour. It was voluntary, not mandatory, but staff member Brad Jackson thought it couldn’t hurt to hear it again and practice the chest presses and mouth-to-mouth breathing.

The next day, at his family’s backyard swimming pool, Jackson used the CPR training to save the life of 13-year-old C.J. Dickerson.

“God put Brad in the place he needed to be at the time,” said C.J.’s mom, Nicole Dickerson. “I cannot begin to say how many thanks I have.”

• The Cauble twins — Brenda and Linda — couldn’t be much closer.

They go to the hairdresser together. They schedule their dental appointments for the same time. They live together and vacation together.

For 38 years, they have been nurses at Novant Health Rowan, reporting to work on the same day in 1979, on their 20th birthday. Through the years, they have always purchased the same model cars at the same time. In July, they were still driving their 2001 Toyota Corollas.

But the Caubles are known as much for their mission work at First Church of the Nazarene and their impeccable professionalism and caring for patients at the hospital.

“Their love for people — it just amazes me, and it’s genuine,” Linda Mercado said. “It’s truly who they are.”

• Bonnie and Floyd Bost marked their 70th wedding anniversary July 20, and the new chimes at St. Paul’s Lutheran Church were dedicated in their honor the following Sunday.

Floyd served as St. Paul’s pastor for 18 years, and after he retired from the ministry and his last call about 20 years ago, he and Bonnie settled in a house close to St. Paul’s.

They can hear the chimes every day.

In their courting days, Floyd would walk five miles one way to Bonnie’s house. She was a beautiful redhead then, he said. As they talked this past July in their sunroom, Floyd confessed to Bonnie he had saved one of her red curls from long ago.

Sure enough, there it was in a cabinet on the back porch.

• Back in late 2016, 89-year-old Gerry Fitzpatrick pledged to sew a quilt for every $30 that was donated toward buying her great-grandson Michael Socorro a new, custom wheelchair.

And each quilt, she declared, would go to a military veteran. When people contributed $3,000 toward the wheelchair, Gerry realized she would have to make 100 quilts.

By this November, Fitzpatrick was only 16 quilts shy of her goal, and most of her quilts already had gone to veterans at the Hefner VA Medical Center.

“We owe everything to veterans,” Gerry said. “Without the veterans, we wouldn’t be able to be here.”

• On Dec. 11 at the Overton Elementary School gym, teachers and administrators were wearing Christmas pajamas, Santa was seated toward the front, and a Polar Express conductor was punching tickets for every student filing in.

They enjoyed cookies, hot chocolate and a reading of “The Polar Express” story.

Then the curtain parted to reveal stacks of gift-wrapped boxes behind Principal Candice Austin. Teachers, volunteers and Knox Middle School students distributed a box to each student.

Inside, they found pairs of New Balance running shoes. The gifts were made possible by an anonymous donor with the help of Ralph Baker Shoes and the Communities in School program.

“We had to do this,” said Communities in Schools representative Fran Lescoe. “Our kids just started the Healthy Rowan Daily Mile program in August, and most of them didn’t have good shoes. … The magic happened today because of our silent donor.

“Isn’t this the most amazing thing?”