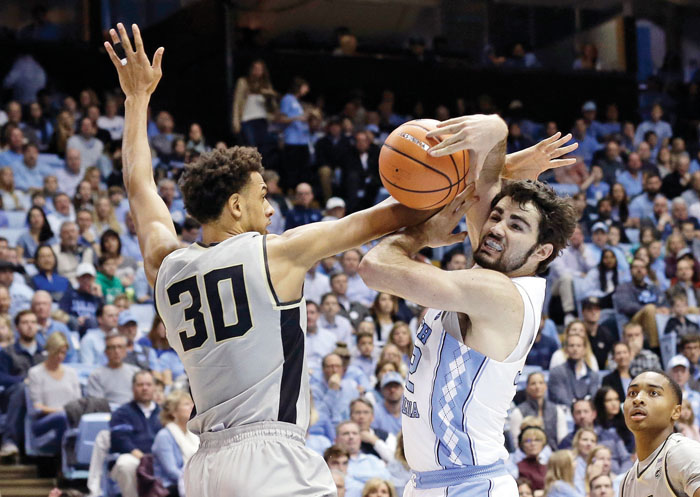 And yet, the 13th-ranked Tar Heels all know they have to play much better if they want to keep winning in league play.

Berry hit a high-arcing floater in the paint with 10.3 seconds left and UNC closed the game on an 8-0 run to rally past Wake Forest 73-69 on Saturday, barely avoiding its first league-opening loss at home since January 2009.

The Tar Heels (12-2, 1-0 ACC) led by 10 points early in the second half, but didn’t hold that margin and trailed 69-65 in the final 2 1/2 minutes. They didn’t defend well after halftime — Wake Forest shot 50 percent in the second half — and didn’t get much in transition all afternoon.

They also got nothing from their bench beyond sixth-man Cameron Johnson.

And all that left coach Roy Williams in a similarly frustrated state to the last time the Tar Heels had played at home: a stunning 79-75 loss to Wofford 10 days earlier.

Luke Maye had 17 points and 15 rebounds to lead the Tar Heels, while Berry had 16. UNC shot just 40 percent but helped itself by taking a 49-34 rebounding advantage and scoring 16 second-chance points to none for Wake Forest (7-6, 0-1).

“That guy’s 7-1 and he has a long wingspan,” Berry said of Moore. “Soon as I saw him coming over, I knew I had to get it high or he was going to block it. I did a pretty good job of doing that — higher than usual, but it went in.”

Wake Forest: The Demon Deacons have been up and down from opening night, bumbling their way to an 0-3 start — two of those were at home — but later putting together a six-game winning streak before last weekend’s home loss to No. 19 Tennessee. But they repeated their late-game fade from that one, when they surrendered a game-ending 13-0 run.

UNC: The Tar Heels had followed the Wofford loss — that snapped a 23-game home winning streak —  with a win against Ohio State in the CBS Sports Classic in New Orleans. But the reigning national champions figured out how to grind this one out with a veteran group.

Bryant Crawford scored 17 points to lead the Demon Deacons, and his runner with 2:23 left had given Wake Forest the 69-65 lead. But Brandon Childress missed a 3-pointer, then Crawford missed another on the ensuing possession extended by a jump-ball call.

Moore — who had five blocks — also missed the front end of a 1-and-1 chance at the line with 34.1 seconds left in a tie game.

Johnson had 11 points off the bench for UNC, but the rest of its reserves combined for two points, four rebounds and three turnovers with none playing more than 8 minutes.

UNC: The Tar Heels travel to No. 24 Florida State on Wednesday.