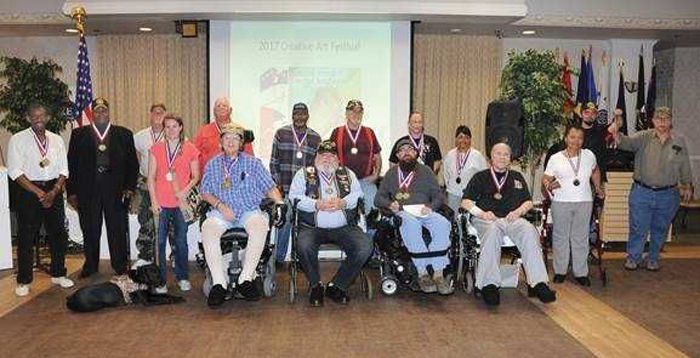 Terri Gilbeau, Recreation Therapist, said it is “awe-inspiring” to have so many national winners. “Over 5,630 entries were submitted into local competitions at 138 VA facilities, so six national winners is a great honor,” Gilbeau explained. Salisbury VA Health Care System received 77 entries from 49 talented area Veterans.

The National Veterans Creative Arts Festival provides Veterans the opportunity to express themselves through the arts and to gain recognition for their creative talents and skills in both visual and performing arts. Visual arts categories range from oil painting and leatherwork to paint-by-number kits, while performing arts includes all aspects of music, dance, drama and creative writing. First place winners at local VA creative art shows are entered in the national festival for competition.

According to James Taylor, U.S. Navy Veteran and one of six national winners from the Salisbury VA Health Care System, “It’s very rewarding to record the world the way it is, or was [through art].”

Taylor took a first-place prize with an oil painting titled “After Snowstorm, Sun on a January Morning.”

Gilbeau said the creative arts have both a healing and therapeutic benefit. “We witness remarkable things when Veterans immerse themselves in the arts,” Gilbeau said. “For some, it is the opportunity to collaborate with others who are creatively minded, socially engage and recognize that there are others out there who ‘get it.’”

All Veterans enrolled in VA healthcare are encouraged to enter the competition. Applications for the 2018 Salisbury VA creative arts festival are currently available through the Recreation Therapy office located in Building 6. Entries are due by 8 p.m. Friday January 26. In addition to the annual Veterans Creative Arts Festival, Salisbury VA Health Care System now offers Creative Arts Workshops on the second Tuesday of the month from 7-8 p.m. Previous workshops included vocal coaching, Zumba and acrylic painting. The next workshop, scheduled for January 9, will feature line dancing in the Building 6 Social Room on the Salisbury VA Campus at 1601 Brenner Avenue.

Veterans who would like more information on the competition or monthly workshops can contact the Salisbury VA Recreational Therapy team at 704-638-9000, extension 13575, 13065, or 13143. More information about the National Veterans Creative Arts Festival is also available at http://www.va.gov/opa/speceven/caf/index.asp.