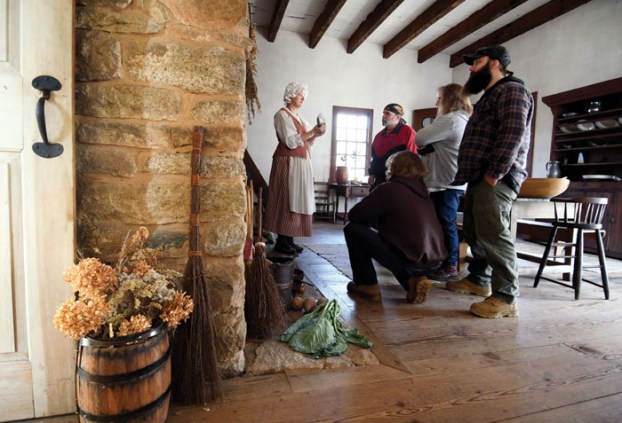 GRANITE QUARRY — The Old Stone House keeps winter darkness away with simple grace — fires for cooking, baking and warmth; music to lift the spirits and green boughs to bring life to the season.

“It represents life in the darkness,” Aaron Kepley, executive director of the Rowan Museum, said.

This is roughly the 30th year Rowan County residents have been invited to spend a German Christmas at the Old Stone House, Kepley said, and the grounds were alive with the sights and smells of the 1600s.

Re-enactors presented their arms as part of a local militia, and colonial-garbed cooks stirred stew over an open fire or pulled pans of bread from an outdoor oven. Visitors could listen to old Christmas carols, purchase colonial-style gifts or chat with artisans about their work or the home’s history.

“The whole purpose is to kind of celebrate German Christmas traditions,” Kepley said.

For the Old Stone House, that meant no Christmas tree. The home was built by the Braun family in the 1600s, and Christmas trees weren’t introduced in North America until the Revolutionary War, brought over by Hessian soldiers, Kepley said.

Old-time traditions are also present in the event’s timing. While Christmas at the Old Stone House used to run for several weekends, it’s now condensed into two days — the weekend between Christmas and New Year’s.

According to Kepley, traditional German Christmases begin Dec. 1, with the celebration of Advent, and end in the first week of January with Epiphany — the commemoration of the Three Wise Men’s arrival.

“Celebrating it now kind of gives homage to that,” he said.

And visitors said they were enthralled with the history of the old homestead.

Curlee Lamberth is a native of Kannapolis, but said this was the first time he’d been to the Old Stone House. He said he was impressed that the house and grounds had survived for several hundred years. He also said that the re-enactors were a nice touch.

“The people who have treasured these items replaying history — it’s just fascinating,” he said.

And watching volunteers cook, bake and chop gave him a new appreciation for modern conveniences.

“It just makes you see how hard life was when people came to America,” he said.

For others, that was part of what made the celebration appealing.

“Everything cooked over the fire tastes so good,” Leslie Deaton said with a laugh.

Deaton said that while she’d been to the Old Stone House before, this was her first time attending one of its official events — and she was enjoying herself.

While Deaton’s favorite part of the day was the food, she said she also found the house itself interesting.

“I just think it’s always neat to see places that are preserving our history,” she said.

Traditionally, German Christmas celebrations marked the official end to the previous growing season, and served to build up excitement and energy for the next cycle. Literally “out with the old, in with the new,” Kepley said.

And the past year at the Old Stone House echoes that idiom. For the first time, the museum partnered with Rowan-Salisbury Schools and Horizons Unlimited to bring school groups down to the house for a day. The site also saw a generous uptick in visitors — nearly 3,000 in 2016.

It’s a trend that he, and others who work with the beloved homestead, hope will carry over into the new year.

Old Stone Christmas will continue today from 12 p.m. to 4 p.m.

By Dennis Davidson dennis.davidson@salisburypost.com SALISBURY — We’ve all done it. We’ve all sat in our cars at stop lights, on... read more