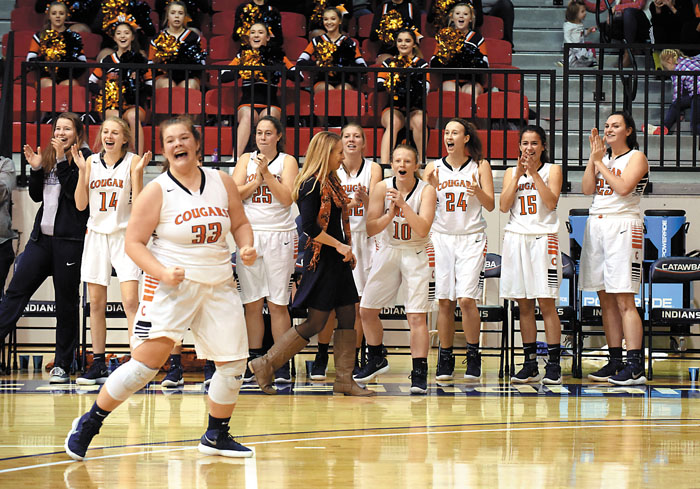 Joy mingled with we-finally-did-it relief for the Carson girls on Saturday night after they beat South Rowan, 54-40, in the championship game of the Dale’s Sporting Goods/Sam Moir Christmas Classic.

Carson had lost in finals to Salisbury in 2010, 2011 and 2016 and to North Rowan in 2015, but this time the second-seeded Cougars (12-1) got it done. Fourth-seeded South (8-4) provided some assistance by knocking out No. 1 seed Salisbury with a buzzer-beater in the semifinals.

That game had to take a lot out of South, although coach John Davis wasn’t looking for excuses.

“We did look a little tired in the third quarter when they made a run,” Davis said. “But, hey, this was a championship game. And when you get to a championship game, you’ve got to find a way to keep on digging. I believed we could win this tournament. Any of the top four seeds were good enough to win it.”

“It feels great,” Gabriel said. “South is a rival, so this was very exciting from start to finish.”

All-tournament pick McKenzie Gadson, who was great in the semifinal win against West Rowan, had eight points and five rebounds for the Cougars.

Sometimes Gabriel and Gadson have to shoulder the  load, but on this night, the supporting cast came through. Freshman Ellie Wilhelm (three 3-pointers, 13 points) and veteran post players Anne Marie Turney and Maren Shumaker, who combined for 17 rebounds and 10 points, were difference-makers.

Janiya Downs had 21 points and nine rebounds for South. Tazah Hardin, who made the game-winning shot against Salisbury, scored 10 points and joined Downs on the all-tournament team.

A 3-pointer by Downs started the scoring, but Carson took care of  the next 10, with Gabriel and Wilhelm drilling 3-pointers.

“Ellie can really shoot and I told her to be ready to take her shots,” Gabriel said. “She knocked down some big ones.”

South played well in the second quarter and got back to 14-all on a layup by Downs. But Wilhelm kept shooting with confidence. She had 10 points at halftime, matching Downs, and Carson held a 29-23 lead.

“South had killed us on the boards when we played them earlier this season, but we did a much better job on the boards tonight,” Stouder said. “Turney and Shumaker were great.”

Carson’s 7-0 burst at the start of the second half provided a cushion. Gabriel scored five quick points and Turney got a bucket in the lane. Suddenly, the Cougars were up 36-23.

South fought back within eight points at 48-40 after buckets by Downs and Hardin.

With three minutes left, Stouder called timeout and put the Cougars in a delay game in which Gabriel handles the ball 80 percent of the time. The instructions to the Cougars were clear: no shots — except layups or free throws.

Carson dribbled and passes for nearly two minutes, as the crowd screaming, begging for the Raiders to foul. Then, with 1:09 remaining, Gadson got loose for the back-breaking layup.

Carson had a 20-10 edge on offensive rebounds and a 45-27 rebounding advantage overall. Carson was 17-for-18 at the foul line (all Gabriel and Turney), while South shot just 6-for-15 on free throws. Carson shot just 29.6 percent from the field, but the foul line and all those rebounds compensated. South was 2-for-16 on 3-pointers, while Carson knocked down five 3-balls.

“A lot of little things hurt us,” Davis said. “Rebounding hurt us and the free-throw line hurt us, but I can’t be anything but proud of our girls. For three days, they gave me all they had.”

South was playing in a championship game for the first time since 2001 when East Rowan beat the Raiders in a 36-31 struggle.

For Carson, a championship game was nothing new, but winning one certainly was.

NOTES: South senior Riley Corriher was the RONZ Award winner. That award  for sportsmanship and dedication is given in honor of Ronnie Gallagher, sports editor of the Post from 1997 until his death in 2013. … Gabriel was the RONZ Award winner last year. … Abigail Wilson of fourth-place West Rowan and Jinika Glenn of third-place Salisbury also were voted to the all-tournament team.