Looking ahead: Main Street Mission expanding reach into the community 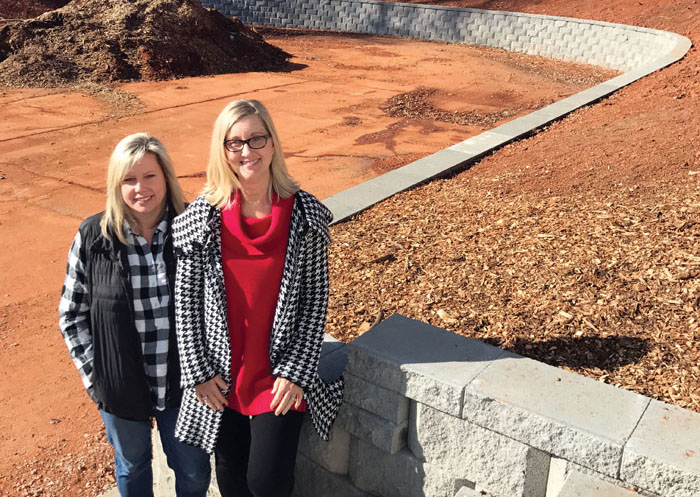 Hope Oliphant, left, and Anne Corriher stand in front of a newly built retaining wall at Main Street Mission in China Grove. The organization is expanding in 2018 with a food pantry being built next to its original building. Photo by Susan Shinn Turner, for the Salisbury Post.

CHINA GROVE — After learning some valuable lessons in 2017, the staff of Main Street Mission is looking forward to 2018 with great anticipation for its upcoming expansion.

A retaining wall has been completed behind the former laundromat that will become Main Street Mission’s enlarged food pantry. This 1,500-square-foot building will add 3,500 feet of new space. Steps have been built to connect the two properties. With more room in the original building, Main Street Mission’s staff envisions the space as a hub for community meetings, classes and gatherings.

With a nod toward future use, the original building will become Main Street Meeting Place, with the food distribution center known as Main Street Market Place. Jones Family Construction of Mount Ulla is the general contractor.

Staff members are continually seeking input from the neighbors they serve as to how Main Street Mission can improve its mission. For example, Hope Oliphant, the organization’s community outreach advocate, worked with graduates of the mission’s Getting Ahead class to create a new Christmas gift-giving experience, the Classic Christmas Shoppe. The Getting Ahead leadership group included Cristy Monsequr, Jeff Hubbard, Krystle Fisher and Molly Frost.

The group expanded the event, held at the South Rowan Y, from one to three days, so as to allow neighbors more time to shop in a more store-like atmosphere. Many churches and other groups in the South Rowan area donated items for the shop, which were sold at drastically reduced prices to help neighbors in the community provide Christmas for their children. Groups and individuals also volunteered at the shop. In the spirit of creating such an atmosphere, Oliphant decided not to schedule shopping appointment times for neighbors.

But doing so, she says, created a “Black Friday” shopping experience the first morning.

“When you don’t have anything, you want to make sure you’re there,” Oliphant explains.

The second day, staff members and volunteers regrouped, and issued tickets to neighbors to create a more orderly experience.

The next two days were better, she says. Graduates of the mission’s Getting Ahead program organized the store. Among themselves, they made a rule of spending $20 per child so everyone would have enough. They also agreed they wouldn’t set gifts aside for their own families.

Ahead of next year’s store, Oliphant plans town hall meetings to get further input from neighbors.

“We want to talk about how to shop and what they want to see in the shop,” Oliphant says. “We’re not going to plan from the top down, but from the bottom up.”

Despite the bumps, this year’s effort paid off. The mission served 172 families, more than double the number last year.

“It we would have gone with the status quo, we would not have learned from the experience,” Oliphant says. “It was a huge team building experience for our Getting Ahead graduates.”

“The shop helped us empower new leaders,” Corriher says. “That’s what our Bridge Builders initiative is all about.”

There was also money left over from the project, and the Getting Ahead graduates used it to help one family with a car payment, one neighbor get into a new house, and buy bunk beds for another family.

Bridge Builders is a 15-week program designed to help participants move out of poverty. About 40 participants have graduated from the Getting Ahead program, with countless middle-class members of the community completing Bridges training.

“It just keeps building, which is what it’s supposed to do,” Corriher says.

And Corriher and Oliphant learned other lessons this year. Because of grant funding cuts, the mission was only able to offer 200 turkey dinners — half the number of previous years.

“Over the years, we’ve created this expectation,” she says. “We had neighbors who were very angry that dinners were not available. So we need to have more community meetings. This is about education, and it’s about explaining where this donated food comes from. We do not want to create anxiety, but ownership, and talk about how we can all work together. We’ve got to stop thinking that the mission’s leadership has to come up with this plan.”

After 18 months, Main Street Mission is closing in on its $400,000 capital campaign goal. It has received a lead grant from the Cannon Foundation, as well as grants from the Hurley Foundation, F&M Foundation, the Robertson Family Foundation and the Woodson Foundation. Tom Smith was the lead individual donor, with gifts from other individuals including Tommy Eller, Andy and Sabrina Caudill, Gordon and Becky Drye, and Jean Ray.

“We do want to thank all of our donors,” Corriher notes. “We are so grateful to each one.”

She also praises Fred Corriher, a longtime advocate of Main Street Mission who has served as an informal fund-raiser, introducing her to many potential donors during the last several years.

The project is slated for completion in June.