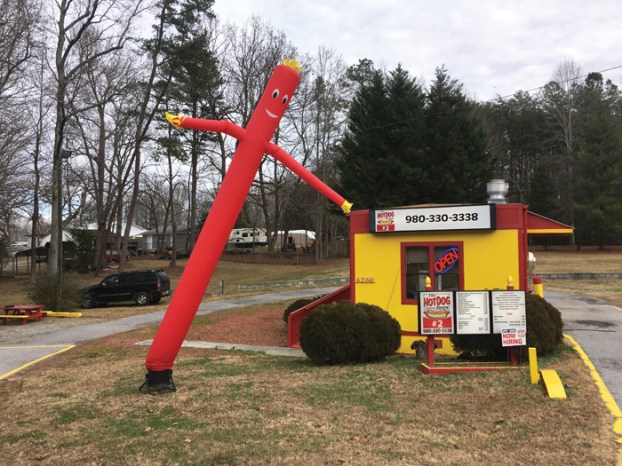 SALISBURY — Hotdog Shack owner Jason Smith said that the paint color of the building he bought for his newest location — Hotdog Shack No. 2 — is called “Ketchup and Mustard.”

“And I don’t necessarily like it but it is painted so well. …Like, it’s very professionally painted,” Smith said. “I just instinctively thought, ‘We’ll (repaint) it for sure.’ But when we got out here, it was too good. So we’ll just leave it alone.”

The bright yellow-and-red “shack” is made even more noticeable by a red inflatable man that dances in front of the building, beckoning people traveling down U.S. 601 to stop in for a burger or hot dog.

But, with his original location in Granite Quarry still booming after nearly five years in business, Smith doesn’t need to do much to attract customers.

“The idea behind the Hotdog Shack was kind of a whim anyway, just something fun to do,” Smith said of starting the business in July 2013. “We decided to let it play itself out, you know, see how it would go. And of course we’ve been blessed beyond measure.”

In the years since opening the original restaurant — located at 408 U.S. 52 in Granite Quarry — Smith has become a fixture in the community. In addition to serving at Rowan Helping Ministries with his staff, Smith also donates a portion of his restaurants’ profits back to the community every month.

“And we feel blessed to be able to do that and again, in return, the community has blessed us. So it’s kind of an easy decision to make, we just give kind of a percentage back every month and it’s worked so far, nearly five years,” Smith said.

Smith got his start with selling hot dogs when he worked at the Piedmont Boll Weevils stadium nearly 20 years ago.

“I would walk around the stands and sell hot dogs. And then I graduated from that and had my own hot dog cart at the stadium. So I moved up in the world. And after doing that for a period of time, I just, I enjoyed it,” Smith said. “And here I am today, selling hot dogs.”

Smith said it isn’t necessarily the hot dogs that he’s enjoyed, but rather the people he’s gotten to serve.

“I more enjoy seeing my customers’ faces. They’re happy the majority of the time. You always have somebody happy, you talk to them, you communicate with them,” Smith said.

Smith said that, before he purchased the new Hotdog Shack site — located at 6266 U.S. 601 in Salisbury — he tried to interact with as many people in the area as he could.

“I came out here and sat for, I don’t know, maybe two weeks and just sat in the parking lot and would watch during lunch and count cars and talk to people and go visit some neighbors and talk to them just to see what the feel was in this area. Because, you know, it’s a little further out from town,” Smith said. “And we just had a really good reception from everyone. So it worked out.”

Smith said that, in the future, he plans to open several more Hotdog Shack locations. He said that, while he couldn’t share too many details about where and when yet, at least one would open in the next two years.

He said that any future location would still have the “feel” of the original Hotdog Shack.

“The idea of being able to order it at the cash register, you order it, you pay for it and you go sit down and we call your name out. First names are very important to the Hotdog Shack,” Smith said. “We like to know our customers on a personal level and so each person is going to hear their first name when they’re in there, more than once.”