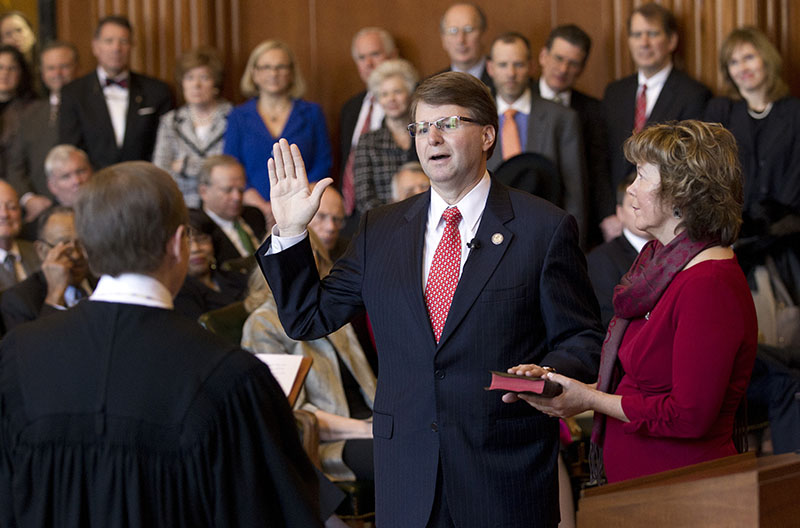 N.C. Chief Justice Mark Martin, shown taking the oath of office in 2015, has said ,“What the people of our state need the most is a qualified and independent judiciary.” (AP Photo/The News & Observer, Chris Seward)

Editor’s note: This is an excerpt from a speech made at the annual meeting of the Judicial District 19C Bar in November.

The independence of our judiciary is under attack, and we, the members of the bar, must bear the burden of protecting and preserving that independence. As noted by retired Justice Sandra Day O’Connor in an interview several years ago, “Judicial independence does not happen all by itself. It is very hard to create, and it’s easier than most people imagine to destroy.”

Chief Justice Mark Martin, in his June 2017 State of the Judiciary message to the North Carolina Bar Association, said, “What the people of our state need the most is a qualified and independent judiciary.”

The Federal Bar Association Board of Directors echoes that theme: “Judicial independence, free of external pressure or political intimidation, lies at the foundation of our constitutional democracy. An independent judiciary needs to remain free of undue influence from the legislative and executive branches and to remain beholden only to the maintenance of the rule of law and the protection of individual rights and personal liberties.”

With apologies to the Almighty, when I think of the doctrine of separation of powers and our three “equal” branches of government, 1 Corinthians 13:13 comes to mind. You know it and hear it often at weddings. “These three remain, faith, hope and love, but the greatest of these is love.” In my separation of powers world, it is, “These three abide, the executive, the legislature and the judiciary, but the greatest of these is the judiciary.”

Regrettably, we have seen a contrary view of the judiciary, and especially in recent legislative efforts by the North Carolina General Assembly. After more than 15 years of bipartisan effort on the part of former N.C. Supreme Court justices, Court of Appeals and other judges and other people of good will, along with the North Carolina Bar Association, great strides had been made in preserving and enhancing an independent judiciary. Partisan labels were removed from judicial races. A funding mechanism was established for judicial races, which substantially reduced the need for judicial candidates to raise money. Merit selection was on the horizon.

Then the wheels began to come off the independent judiciary carriage. Among the troubling legislation is a bill passed in 2016 that restored partisan elections for the North Carolina Supreme Court and the North Carolina Court of Appeals. Then earlier this year, the General Assembly restored partisan judicial primary and general elections for the North Carolina Superior and District Courts. A recently passed law calls for a statewide referendum on a proposed Constitutional amendment with the clear objective of reducing the term of every Supreme Court justice, every Court of Appeals judge, every Superior Court judge and every District Court judge to two years.

In my view, and I ascribe it to no one else but believe it is shared by many, these actions are more about partisanship than justice and fairness.

To the great credit of Chief Justice Martin, he publicly opposed this recent two-year term effort because it would force judges to campaign all the time and to raise money for campaigns without ceasing. This legislative agenda becomes increasingly dangerous in light of the Citizens United Supreme Court decision several years ago, which has permitted substantial anonymous contributions to campaigns, including judicial campaigns in North Carolina, with no accountability as to source.

There is no longer any transparency with respect to these huge contributions, many from outside North Carolina, and it may soon become as simple to buy a judge as it has become to buy a legislator.

According to the Brennan Center for Justice, a huge spike in judicial campaign money has brought a proliferation of television ads, many of which took on the negative tones more common in legislative races. And sadly, we have seen some of this in North Carolina judicial races.

Judges should not have patrons or agendas; judges must be dedicated only to the rule of law as they perform their duties; and we as members of the bar must not sit idly by while the judiciary is politicized.

It is time for us to stand up and speak out however we can and whenever we can for the independence of our judiciary. These developments should be leading us back to our former track of merit selection for judges.

As the chief justice noted in his State of the Judiciary report, let’s step away from ordinary politics and let the people decide whether our judges should be chosen through a merit selection process rather than partisan elections. Hence, his proposal for a referendum on merit selection of judges.

You should also know that the North Carolina Bar Association has a Judicial Independence Committee, which is dedicated to the cause of judicial independence. It is chaired by John Wester, a past president of the North Carolina Bar Association, who noted that the very existence of the committee “signals our Bar Association’s commitment to serve as first responders to unwarranted attacks on the judicial branch and ultimately the preservation of individual rights and liberties protected daily by the judicial branch of government.”

I submit that each of us has a responsibility, individually and collectively, as members of this Judicial District 19C Bar, to be among those “first responders.” It is time for us to stand up and engage on this vital matter. Accept the challenge. Do your part.