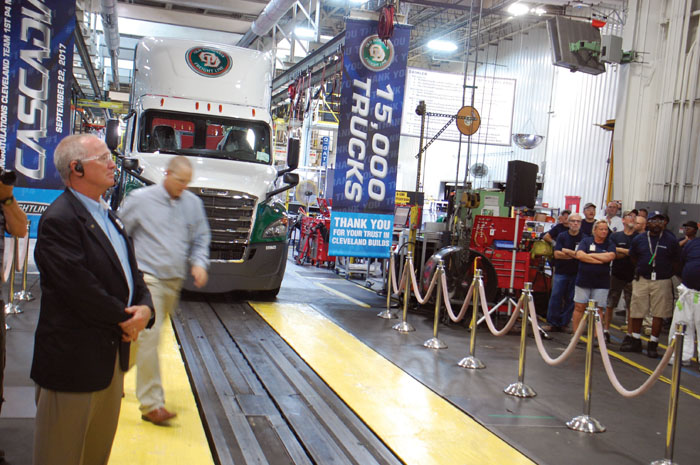 Every year brings mixed results on the economic front, but 2017 showed more promise for Rowan County than we’ve seen for years. The progress was modest but widespread.

There was bad news, to be sure. The 50-year-old DuraFiber plant that once employed thousands put 373 people out of work when it shut down. The National Sports Media Association, founded here in 1959, hurt local pride and tourism when it abruptly moved to Winston-Salem.

As is the case nationwide, we are a county of haves and have-nots, with the span between the two segments growing.

• Truck manufacturer Daimler/Freightliner announced it would expand its workforce by 50 positions and invest $19 million in a new logistics center at its Cleveland plant. The company also pledged $100,000 to United Way, which had a successful campaign this year.

• The 100th anniversary of Cheerwine proved to be a civic and financial boon as people from all over crowded into downtown. The company also pledged $100,000 to match new gifts to United Way.

• In a year that brought corporate streamlining to parent company Delhaize America, the 60th anniversary of Food Lion stoked pride in the grocery chain’s legacy and resilience.

• The unemployment rate fell by a full percentage point from October 2016 to October 2017 to 4.4 percent and is less than half of what it was just five years ago.

• Residential developments approved or discussed include a 167-lot subdivision across from Millbridge Speedway, 21 home sites in the second phase of Millers Grove in China Grove, and 250 single-family homes as well as multi-family units and more in the Village at Granite, in Granite Quarry.

• Water lines will soon be installed in the northern end of the county.

• In perhaps the most forward-looking project of the year, the Rowan County Chamber of Commerce is working with county government to launch the IDEA Center at West End Plaza. Local colleges and many others have a hand in the effort, which is aimed at innovation, development, entrepreneurship and acceleration — hence the IDEA name. Rowan is determined to spur, attract and nurture entrepreneurship.

As the clock runs out on 2017, the people of Rowan County have reasons to be optimistic about the future. The economy is moving forward. Local officials aren’t waiting for something to happen; they’re pushing every step of the way.