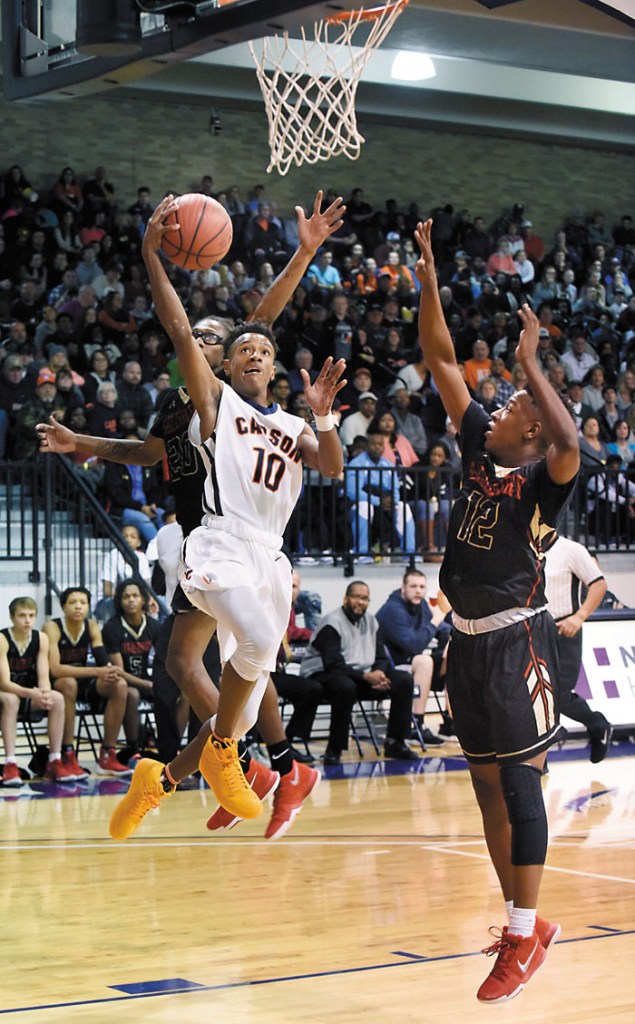 SALISBURY — Like a good fastball, destiny rarely travels in a straight line.

Just ask the Carson boys basketball team, which completed its 12-year pursuit of history Saturday night with a thrilling, 67-65 win over Salisbury in the Dale’s/Sam Moir Christmas Classic title game. In a battle of unblemished heavyweights — the tournament’s Park Place/Boardwalk intersection — the match appropriately morphed into an old-school, after-class street fight. Through it all, the Cougars learned that nothing worth having comes without a price.

“Nothing at all came easy,” coach Brian Perry said after top-seeded Carson (12-0) survived an edge-of-your-seat finish and earned its first boys championship. “Salisbury is a scrappy, tough, hard-nosed team. I think we got up 18 (points) and were right on the verge of knocking them out, but they came back swinging. It took everything we had to win it.”

It did. The Hornets (10-1) weren’t defeated until Carson’s Jailen Williams drove to his left, curled down the lane and made a game-winning layup with 4.5 seconds remaining.

“It’s hard to lose,” Salisbury coach Bryan Withers said after Salisbury’s ferocious, second-half comeback fell short. “But, you get down and you see how these kids dig in. These kids got heart. They battled and they pushed all the way back. You can’t be mad about that.”

Carson shot 50 percent from the field (25-for-50) and drilled nine 3-pointers, crowning a weekend that produced exhausting victories against defending champion West Rowan, never-say-never Davie County and finally the fight-for-everything Hornets. Tournament MVP Jamarius Hairston shot 8-for-12 from the field, scored a team-high 22 points and corralled 14 rebounds. Teammate Owen White broke out of his own personal Alcatraz and scored 21 points — 11 in the opening quarter when he stuck three of his five 3-balls. And Williams, who harvested 12 points and four assists from 25 foul-plagued minutes, proved to be the player crunch time couldn’t contain.

“I wasn’t playing too smart, fouling as much as I did,” Williams said. “But even though we were down and we lost the lead, we didn’t lose our composure.”

Carson surged to a 47-29 lead when White banged home a 3-pointer with six minutes remaining in the third quarter.

“We were down big and had to bring ourselves back,” said SHS senior Oshaun Robinson (10 points, 9 rebounds). “So defensively we just started talking more and offensively we began to rotate the ball. I at least thought it would go to overtime.”

Salisbury’s uphill climb included Trell Baker’s three from the top of the key that trimmed Carson’s lead to seven late in the third period. Then Cameron Gill snagged an offensive rebound and hit a last-minute putback — just seconds before he corkscrewed down the lane for a bucket that pulled the Hornets within 55-50 with a quarter to play.

“It was all about sticking together and not giving up,” Gill said after contributing 11 points and seven rebounds. “We really wanted to go to overtime. It would have been an even tougher game instead of ending like that.”

It didn’t end until Salisbury went ahead 64-63 on a floater by high-scorer Baker (24 points, 3 steals), the senior guard with a little Iverson in him. But that came with 3:32 remaining and was the Hornets’ last basket. Carson tied it 65-all when Hairston sank two free throws with 1:50 to go.

“They tried to put their foot on our throats, but we’re a fighting team,” White said after converting five of 11 long-range shots. “We’ve got a tough seven (players) to go through. If you can go through our seven, you deserve to win.”

It was White who launched Carson’s winning sequence when he reeled in a defensive rebound with the score tied and 1:34 to go. As the Cougars played keep-away and melted seconds off the clock, Perry spent not one — but two — timeouts, the last with 21 seconds on the clock. When play resumed, Williams ball-handled on the right side while Baker provided chest-to-chest defensive coverage.

“(Baker) was trying to force me to turn it over,” Williams said. “He cut me off from going right, so I had to switch to my left and drove through the paint. At the same time I was waiting to see if anyone would fall in and help defend. But no one did, so I took it all the way down the lane.”

Withers said it was a calculated decision to let Baker deal with Williams alone. “They’re so good at dishing it off,” he said. “With their shooters, it was the best play.”

And the decisive one — a driving layup that put Carson in the record book as the eighth different team to win the boys championship.

“I’ll always remember that last shot,” Hairston said. “Senior year, we were never going to get another chance at this. It was now or never — and we go out the way we wanted to go out. In the end, we made the plays we had to.”