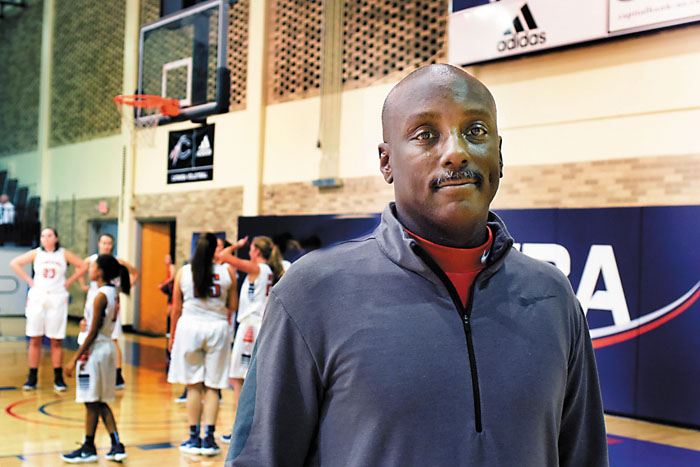 Larry Dalton. photo by Wayne Hinshaw, for the Salisbury Post

SALISBURY — We’ve all done it. We’ve all sat in our cars at stop lights, on the way to work, just day-dreaming or singing along with the radio.

Now imagine your consciousness being suddenly alerted to a man running directly at you from the left, holding a handgun. And he doesn’t seem to be heading anywhere else, except right at you.

There’s no time to really even react to what’s about to happen.

This was Larry Dalton Jr.’s situation on Nov. 9, just after 5 p.m. Dalton, a sales rep at Gerry Wood Honda, was sitting in his Acura at the stop light on Brenner Avenue, waiting to turn left onto Jake Alexander Boulevard. He had taken a short break from work to run a couple of errands and was now on his way back to the dealership.

Paul Jones III had just robbed the Wells Fargo Bank to Dalton’s left, shooting a man in the process. Jones ran from the bank and needed a getaway car. He ran towards Brenner Avenue and decided Dalton’s Acura was it.

“He ran out of the bank and I guess my car was the first one that he figured he could get to,” said Dalton, 45, of Salisbury. “So, when I realized he was there, I just kind of turned and the gun was already pointed at my window. I just dropped my head down and away from him as he fired.”

The shot hit Dalton in the back of the head, but somehow, did not penetrate through his skull. His brain was untouched. The 25-year-old Jones fired again, hitting Dalton in the arm as he scrambled into the back seat.

Then the car was moving.

“I was kind of woozy and couldn’t really see,” Dalton recalls. “I could tell we were moving and when I kind of got myself together, I started feeling around for a door handle. One was unlocked and I just threw myself out of the car.”

According to a police report, Jones had taken a left into the parking area beside of Burger King, adjacent to Lincolnton Road. Jones must have sped through the lot and out the exit because, according to Dalton, when he exited the car, he “ended up on Lincolnton Road, in front of Salisbury High School.”

Dalton added that a “good Samaritan, who had been following, stopped to help me.” Dalton recovered at Wake Forest Baptist Health in Winston-Salem.

From additional reports and other eyewitness accounts, Jones proceeded onward, eventually circling back to Jake Alexander Boulevard. At a high rate of speed, Jones crashed the Acura into another vehicle in front of Jerry’s Shell station.

Jones was then shot and killed in an exchange of gunfire with police.

Dalton recounted his experience on Thursday afternoon at Goodman Gym, at the Dale’s/Sam Moir Christmas Classic, the annual high school basketball tournament. Amazingly, just 49 days after his ordeal, Dalton was back doing what he loves — officiating basketball.

Dalton was part of the three-man crew that called the first two games of the tournament on Thursday morning. A “ref,” for 20 years now, Dalton was, obviously, happy to be back on the court, even though the bullet is still lodged in his skull.

“First of all, just being at the house all the time was getting to me, and secondly, I felt like I needed to get out and move these muscles and bones,” said the upbeat Dalton. “The doctors said that I was fine to return to this kind of activity. I’ve been to all of my doctors, neurologists, trauma people … and everybody has cleared me. I just have one more ear doctor appointment on Jan. 3 and hopefully, that will be my last one.

“Hopefully, I can get back to work at Gerry Wood the first part of January,” continued Dalton, who has been out of work since the incident. “I guess I have a good story to tell my customers.”

Another local basketball official, Tom McDaniel, is Dalton’s uncle. When Dalton moved to Salisbury from Greensboro in 1996, McDaniel recruited him into the officiating business. “I just wanted to make a little extra money, but it’s gone on from there,” said Dalton. “I love the game and consider myself a student of the game.”

Dalton has been calling high school varsity games for close to a decade now and has dipped his toe briefly into the college game. He said that he’s content with the high school work, saying “a couple of days a week is sufficient for me.”

Dalton said that his parents, Larry Sr. and the late Debra Scott Dalton, had grown up in Salisbury but moved to Greensboro after they married. Larry Jr. graduated from Page High School. The parents moved back to Salisbury and Dalton Jr. eventually followed them here.

“My mother always said that I was hard-headed … I guess she was right,” chuckled Dalton. “It was a good thing. By the bullet hitting me in the back of the head, it hit my skull and it didn’t touch my brain, so I’m thankful.”

“I felt thankful to even be out there, 9 a.m. or not,” he said. “I was supposed to have worked some scrimmage games to get ready for the season the day after the incident, so I couldn’t go to that and about a week or so later, the season started. So, I missed the whole month of November. I kind of started back in the middle of December and so I’m just flat happy I can be out here, officiating again.”

Dalton not only had to heal from his gunshots, but also from the fall out of the car.

“Because I had jumped out of the car, I had a bunch of sciatic nerve problems and a lot of pain in my lower body, so I really couldn’t move around a lot,” recalled Dalton. “Right after Thanksgiving, those pains started subsiding, so I was able to get up and start moving around slowly. I still had doctor’s appointments and things that I needed to get squared away before I could officiate again.”

Another member of Thursday morning’s crew, J.T. Bost, is just glad Dalton is back. Like Bost, Dalton is assigned by the Triad Basketball Officials Association.

“I am surprised that he returned this quickly, but he’s a resilient guy,” said Bost. “He’s an official but an athlete, too, so that probably helped in his recovery. He had a great testimony in our pre-game officials’ meeting.

“To be back out here in a month and a half — it’s remarkable — but that’s him,” continued Bost. “He wants to get back into the flow of things. I’m scheduled to be in games with him in the next few weeks, so I’m just excited about that. Our entire association was devastated when we first heard about what happened to him, because that’s one of your officiating brothers, and we care about each other. I’m so happy he survived and has recovered so quickly.”

Dalton said that doctors decided it was best to leave the bullet in his skull, rather than risk complications from surgeries. But how did he recover so quickly? Dalton said that it’s just in his makeup.

“I’m not going to let anything keep me down,” he said. “I’m the type person that ‘I’m going to go get it.’ I’m always doing something because I know nothing happens for you if you just sit around. And I don’t want to let anybody down — all the good people here in Rowan County that were praying for me. I’m just thankful for every last one of them.”