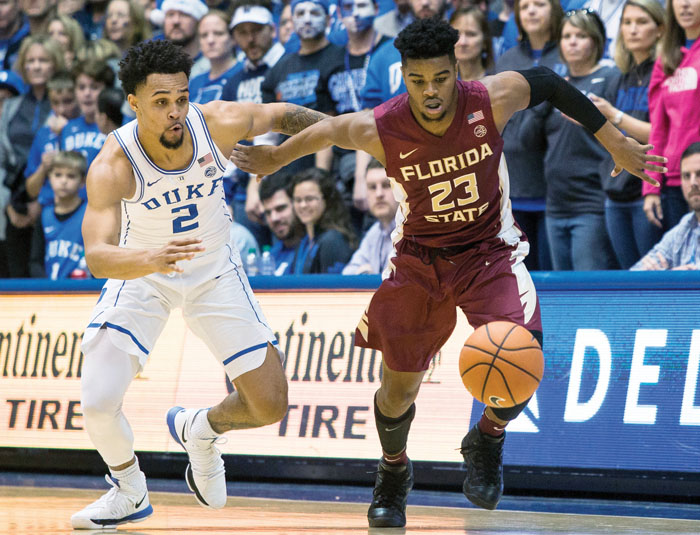 DURHAM (AP) — Marvin Bagley III and Wendell Carter Jr. kept cleaning up plenty of misses for No. 4 Duke. Florida State had no way to stop them, especially down the stretch when the Seminoles’ shots stopped falling.

Bagley had 32 points and a season-best 21 rebounds, and the Blue Devils pulled away to beat No. 24 Florida State 100-93 on Saturday.

Fellow freshman Carter added 14 points and a season-high 16 rebounds, Grayson Allen scored 22 points and Trevon Duval scored 11 of his 16 in the second half to help the Blue Devils (13-1, 1-1 Atlantic Coast Conference) win a back-and-forth game that had 14 lead changes and the feel of March.

“We couldn’t stop each other,” coach Mike Krzyzewski said, “and the will to score and will to win was evident every second from both teams. For us to win that game is sensational for our group.”

Phil Cofer scored a career-high 28 points and Braian Angola finished with a career-best 23 for the Seminoles (11-2, 0-1), who shot nearly 45 percent and hit 15 3-pointers. Angola’s 3 with just under 4 minutes remaining put them up 91-89, but they missed their final eight shots — six of which came from long range.

“I thought our kids were connected. We just didn’t have an answer for keeping Bagley and Carter off the glass,” coach Leonard Hamilton said. “They are such good athletes and have such great hands and timing and strength. … That made the difference in the game. When you have two guys like that, they make up for misses.”

Bagley and Carter combined for 37 rebounds — two more than the entire Seminoles team — and they helped Duke impose its will inside when it counted most. Of Duke’s final 12 field goals during the last 10 1/2 minutes, all but one were layups or dunks.

Duval and Carter teamed to make several key plays down the stretch for the Blue Devils, with Krzyzewski saying he told Duval that “we’re not going to call a play. Just go. And he went.”

Duval hit a twisting layup that tied it at 93 with about 3 minutes left, then found an uncovered Carter underneath a possession later for the go-ahead dunk.

Carter — playing with four fouls — then drew a key charge on Trent Forrest on Florida State’s next trip downcourt and Duval hit on another acrobatic drive two possessions later to make it 97-93 and make it a two-possession game to stay.

“I was just in the moment where I saw him driving at me, and during the scouting report, I knew he wasn’t going to stop on a dime or dish it over,” Carter said. “So I just stepped over and hoped the referee was on my side.”

Florida State: The Seminoles received no favors from the ACC’s schedule-maker. They could open league play with three straight losses yet still have a strong case for a Top 25 ranking because their first three league opponents are Duke, No. 13 North Carolina and No. 15 Miami. They put themselves in position for their second victory at Cameron Indoor Stadium in the past decade — but it slipped away during that untimely cold spell.

Duke: The nation’s fourth-ranked team is no longer in the ACC’s cellar, but had to work awfully hard to escape it. The Blue Devils struggled from long range, shooting just 26.7 percent from beyond the arc, but made up for it by scoring 56 points in the paint, thanks in large part to Bagley and Carter.

Cofer surpassed his career high in the first half, scoring 22 points by halftime. His last field goal — a 3-pointer from the corner — came with about 15 1/2 minutes remaining. “He didn’t force any shots,” Hamilton said. “Other guys got momentum and produced. … The ball just didn’t come to him.”

SHOT OF THE NIGHT

Bagley missed a free throw with 8:44 remaining but grabbed the rebound in the lane and put up a shot through contact from Angola that spun off the top of the backboard and dropped through. Bagley hit the free throw that followed to put Duke up 78-74.