Al Heggins: Newsmaker of the Year 2017 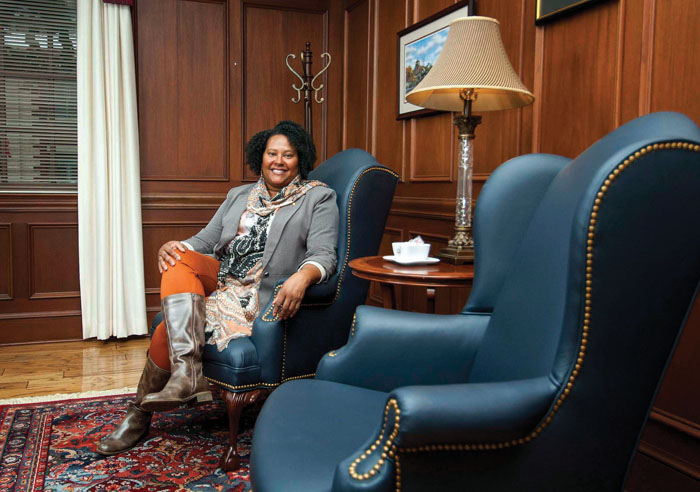 SALISBURY — Al Heggins did not expect to become mayor of Salisbury.

She and her campaign team had their eyes on fifth place.

“I mean, we literally, mathematically did the numbers we needed of votes to get her in fifth place,” said Renee MacNutt, one of Heggins’ campaign managers. “So that was our goal.”

But on election night, as the votes for Salisbury City Council rolled in, it became clear that her team’s months of canvassing, meet-and-greets and door-knocking had paid off — Heggins had the most votes and held that lead for almost the entire evening.

“We were dumbfounded,” said Heggins’ campaign treasurer Regina Dancy. “Not because we didn’t think it could happen. We just didn’t know it would happen to that degree. You know, for someone who’s never ran, being a first-time runner? And these are the results?”

Because Heggins had the highest number of votes — 2,169, at the final count — she was elected mayor by her City Council peers at the council’s Dec. 5 meeting.

That decision, made unanimously by the newly elected Council, gave Salisbury its first black female mayor and led to Heggins being chosen as the Post’s “Newsmaker of the Year” 2017.

Heggins said that, although she did not expect to be elected mayor, she was “glad” and “humbled” to have earned the position.

“And my expectation now that I am the mayor is to really bring in those voices from all across the community so that they know that they’re being heard, so that they can say, ‘Yeah, I know the mayor and she’s accessible. And she’s somebody we can talk to,’” Heggins said.

The road to City Hall

The youngest of seven kids, Heggins’ legacy of collaboration and facilitation stems from her childhood. She said that, growing up, she always wanted people to get along and work together.

That desire led her to pursue a myriad of careers and paths.

Beginning in 1981, when she was in high school, Heggins signed up for the Army Reserves, following in the footsteps of her sister and several of her brothers.

“It’s not anything I’d ever dreamed about or aspired to as a child. I think that being a senior in high school, I knew that I wanted to go to college and I knew that the Army would afford me that opportunity to go to college. And there were other ways I could have done it … but I have always had a deep commitment to service to my community and to my country,” Heggins said. “So I said, ‘This would be a good time for me to go ahead and do my part.’”

It was a path that she stayed with until 1999, just as she was getting ready to have her fifth child.

During that 18-year span, Heggins also got her undergraduate and graduate degrees at UNC-Charlotte, taught ESL at Rowan-Salisbury Schools and worked with the English Language Training Institute at UNC-Charlotte.

She also married her husband, Isaac, and had four children.

After leaving the Reserve, Heggins served as a dean and associate vice president at Livingstone College and then as the human relations director for the City of High Point.

When she returned to Salisbury in 2015, she directed her attention toward activist work both through her consulting agency — the Human Praxis Institute — and as an individual.

“Her favorite pronoun is ‘we.’”

In the course of Heggins’ activist work in Salisbury, she made a number of friends, several of whom ended up on her campaign team when Heggins decided to run for City Council.

Dancy was one of those friends. She said that she met Heggins at a candlelight vigil for Ferguson Laurent, who was killed after a no-knock warrant was served in Nov. 2016.

After Laurent’s death, Heggins and Dancy continued to meet, particularly with the group Women for Community Justice.

“And (Heggins) gave us the opportunity to just simply share. Share our thoughts, share our feelings about what had transpired. And then asked the question of, ‘OK, what are we going to do?’” Dancy said.

In the months after the shooting, Heggins and Dancy — along with MacNutt and numerous others — spoke during public comment periods at City Council meetings and organized Stop the Violence summits. The summits were meant to bring citizens, elected officials and police together to brainstorm how to stop violence in Salisbury.

“Al helped us to see that this is something that is definitely doable,” Dancy said. “It is a possible opportunity that things can change in Salisbury for the good when everybody begins to stop looking at, ‘That’s your problem,’ or, ‘That’s his or her problem.’ No, it’s our problem.”

When the summits ended in August, Dancy said that she was wondering what to do next. It was then that she asked Heggins whether she had ever thought of running for City Council.

“(Heggins said,) ‘No, no, no, no, I don’t want to do such a thing,’” Dancy said. “And I said, ‘Well, you really need to think about that … because your voice is a voice that can bring people together.’”

Dancy said that, even after Heggins won the most votes in the election, Heggins would still not claim the victory as hers alone.

Heggins has said many times that she views City Hall as “the people’s house.”

One of the ways that Heggins plans to make City Council meetings more inclusive moving forward is by having both a Spanish-language and hearing-impaired translator at every meeting.

Heggins had a Spanish-language translator — Flora Calderon-Steck — translating consecutively at her swearing-in ceremony, meaning that Heggins would speak and then Calderon-Steck would translate.

But Heggins said that, if translators were included in regular meetings, they would be translating simultaneously to avoid making meetings longer.

Heggins said that having diversity of every variety engaged in local government will give the city the “edge” it needs to “propel us into the 21st century” and attract more new residents and tourists.

“I think if we were to put a survey out there that says, ‘How does the city of Salisbury show that it is welcoming?’ people may kind of struggle a bit. So I’m hoping moving forward that people will be able to clearly identify and say, ‘These are the ways that our city is welcoming,’” Heggins said.

Heggins said that she also wants to do more for the citizens who are actively engaged in local government, who give ideas and time but don’t see results.

She said that, if a citizen has an idea that isn’t doable, she wants to help them understand why it can’t be done.

“So, you know, people don’t feel like, ‘Oh, I’m just saying all this stuff and I’m so excited and nobody cares.’ Well, we care, but we want to make sure that you understand why something’s not doable,” Heggins said. “I think that helps, so people don’t feel ignored.”

Heggins said that she expects that, as she suggests changes to make local government more inclusive for everyone, there will be “growing pains, in a good way” from both citizens and city staff.

“There are going to be some things from the government side that folks just aren’t going to want to hear and (they’ll) say, ‘But we’ve never done it this way.’ Well, yeah,” Heggins said. “… (And) many times, the community has a certain view and a certain defined picture of what they think …local government is. And sometimes people will think, ‘I know local government can do this, they just won’t.’ Well, there are some things that just cannot be done because of North Carolina laws.”

She said that the growing pains people would experience now would lead to better, more creative solutions from both sides in the future.

“When the community begins to understand why you can’t do something in a particular way, then they begin to get more creative with you,” Heggins said. “It will begin to make sense because we’re learning new pathways, and it’s going to help us begin to hopefully change and expand our views about how we think something just has to be.”