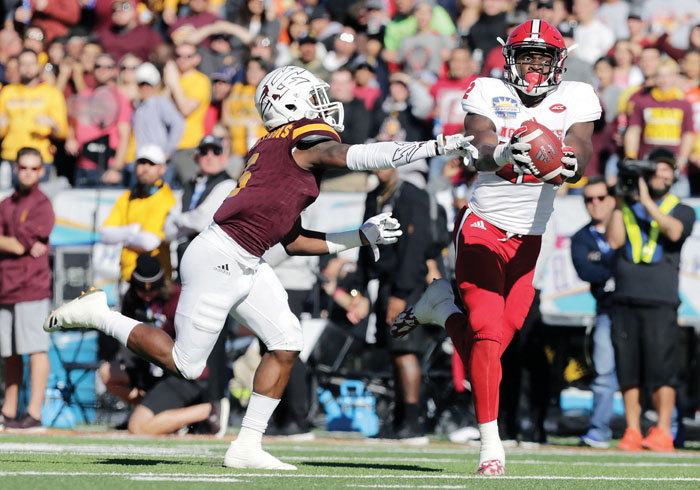 EL PASO, Texas (AP) — North Carolina State’s offense came up big in a Sun Bowl matchup that was supposed to be about defense.

“It just really goes to show how great our offensive line is,” Hines said. “I’ll definitely have to treat them when I get back to Raleigh.”

Hines was named the game’s MVP. He helped the team score on four of five first-half possessions to fuel the rout.

Hines finished with 72 yards on 16 carries for North Carolina State (9-4). The Wolfpack played in their fourth consecutive bowl game and sixth in seven years under coach David Doeren.

“Top 25 (in the College Football Playoff rankings) is the standard we want for this program,” Doeren said.

Reggie Gallaspy added 79 yards and two touchdowns on 12 carries for the Wolfpack, Ryan Finley completed 24 of 29 passes for 318 yards and a score, and Stephen Louis had three catches for 115 yards.

“I don’t think we’ve turned the ball over four times all year,” Graham said. “But give them a lot of credit. They’re a very good football team. We just couldn’t stop them.”

Manny Wilkins was 25 of 40 for 352 yards and three touchdowns for the Sun Devils. He also threw three interceptions.

N.C. State played without defensive end Bradley Chubb. Chubb, a projected top-10 pick in the NFL draft, announced before the game that he wouldn’t play. It marked the second year in a row that the biggest star at the game didn’t play. Last year, Stanford running back Christian McCaffrey skipped it.

N.C. State: The team’s defensive experience showed. Even without Chubb, the Wolfpack limited ASU to 10 points through three quarters.

Arizona State: Graham called the plays Friday. It wasn’t a great showing for him. The offense was unable to run the ball. ASU had 469 yards of offense, but 21 of their points came in the fourth quarter.

N.C. State’s Chubb, the ACC Defensive Player of the Year, announced Friday morning he wouldn’t play. “I just let them know that the decision I made is not anything about them,” Chubb said in a CBS interview. “It’s just looking out for myself. They all understood.”

Arizona State played without one of its leading tacklers, linebacker Christian Sam, who also sat out to prepare for the draft. Jay Jay Wilson had 13 tackles, but ASU missed Sam. The Sun Devils allowed 491 yards of offense. The Wolfpack ran 73 plays and had a 9:00 edge in time of possession.

The 42 points scored in the fourth quarter set a Sun Bowl record for points in a quarter. The 45 points in the second half tied a game record, and the 83 total points was the second most in game history.

N.C. State is 17-13-1 in bowl games and won its first appearance in the Sun Bowl. Hines is the first Wolfpack rusher to have consecutive 1,000-yard seasons since 1977-78. Receiver Kelvin Harmon had four catches for 24 yards, pushing him over 1,000 yards for the season. All-purpose back Jaylen Samuels had seven catches for 46 yards, setting the team record for catches in a career.

North Carolina State: Even though they will lose nine seniors on defense, the Wolfpack is still a team to watch in the ACC. They’ll return nine starters on offense, including quarterback Ryan Finley, running back Nyheim Hines and four of the five starters on the line. The Wolfpack will open next season on Sept. 1 at home against James Madison.