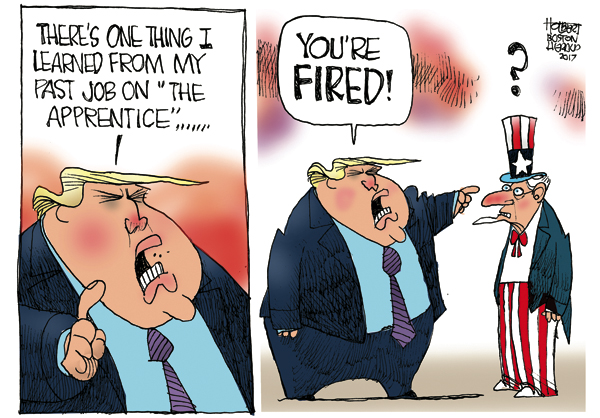 In his first year in office, President Donald Trump has done many positive things — from enforcing Barack Obama’s red line in Syria to recognizing Jerusalem as Israel’s capital, withdrawing from the Paris climate agreement, driving the Islamic State from its physical caliphate, getting NATO allies to kick in more money for our collective security, reversing Obama’s Afghan withdrawal, enacting historic tax and regulatory reforms, and installing conservative judges who will preside for decades.

But his record of conservative achievement has been overshadowed by a series of self-inflicted wounds. Here is my list of the 10 worst things Trump has done in his first year in office:

10. He has made no effort at bipartisanship. Both Bill Clinton and George W. Bush reached across the aisle in their first year in office, but Barack Obama told Republicans that “elections have consequences” and “I won.” Instead of repeating Obama’s mistake, Trump should have reached out across party lines. Perhaps the “Resistance” would have refused, but Trump would have gotten credit for trying.

9. He has spent more time attacking Republicans than Democrats. Trump needs to expand his Senate majority if he wants to pass his agenda. Yet he spent an inordinate amount of time in his first year at war with members of his own party.

8. He is empowering al-Qaida in Syria. By forging a de facto alliance with Russia and Iran to defeat the Islamic State, Trump is driving Sunni Arabs into the waiting arms of al-Qaida —which is preparing to replace the Islamic State and is much more dangerous.

7. He is giving Miranda rights to captured terrorists. Trump promised to start treating captured terrorists as enemy combatants again, but instead of intelligence-driven interrogation and sending terrorists to Guantanamo Bay, he has continued Obama’s criminal-justice approach to terrorist detention.

6. He has attacked the FBI and the intelligence community. Trump is right to be angry about leaks of private conversations with foreign leaders and the political bias of some individuals involved in the Russia probe. But the vast majority of those in the FBI, the Justice Department and the CIA are good, decent and honorable patriots who deserve the president’s respect.

5. His noxious tweets undermine his presidency. He overshadowed his policy achievements, his excellent address to Congress and speeches in Saudi Arabia, Warsaw and South Korea by tweeting about Obama “wiretapping” him, gloating over Arnold Schwarzenegger’s failure on “The Apprentice” and attacking the hosts of “Morning Joe.” Trump fails to understand that the power and grandeur of the presidency are greater than any of the smash-mouth tactics that got him into the office.

4. He fired James Comey. If he wanted a change in FBI leadership, he should have announced it the day after the election. Comey’s belated firing led directly to the Mueller probe, which hangs over the Trump presidency like the Sword of Damocles.

3. He has dismissed Russian interference in the 2016 election. During his trip to Asia, Trump said he really believes that when Vladimir Putin tells him Russia did not interfere in the 2016 election, Putin believes it. This is patently absurd. Putin directed Russia’s meddling. It is possible to accept that Russia sought to influence our election without accepting that there was any collusion. The fact that a foreign government tried to undermine our democracy should outrage all Americans.

2. He stood by Roy Moore. His endorsement of an alleged sex predator was morally indefensible and sent a message to women everywhere that Republicans do not believe that credible allegations of a grown manmolesting teenage girls are disqualifying. And that message has been received.

1. He has failed to condemn the alt-right. His “many sides” response to Charlottesville, Virginia, was shameful. There a lot of things about the presidency that are hard, but condemning neo-Nazis isn’t one of them. While Trump eventually did so, as white nationalist Richard Spencer pointed out, “Trump has never denounced the Alt-Right. Nor will he.” Sadly, Spencer is right. Trump’s failure to condemn the right’s fever swamps hurts his presidency and the conservative movement.

When Trump took office, he had 45 percent approval. Yet today — despite policy successes at home and abroad, economic growth exceeding 3 percent and unemployment at a 17-year low — his approval has dropped 10 points to 35 percent, the lowest of any modern president at this time in his administration. If Trump wants to understand why, he can start with this list.

Thiessen, a fellow with the American Enterprise Institute and former chief speechwriter to President George W. Bush, writes a twice-weekly online column for The Washington Post.