Salisbury girls bounce back with 3rd-place win over Falcons 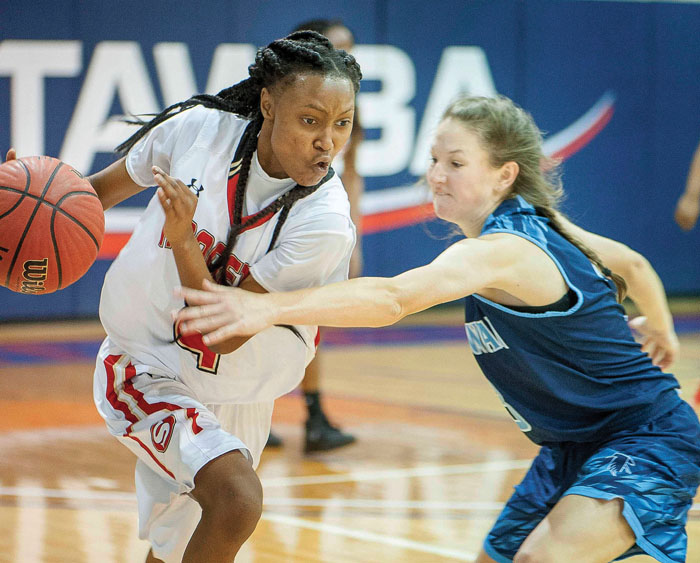 SALISBURY — The stain from top-seeded Salisbury’s semifinal disappointment will take a while to erase.

But Saturday’s 69-57 victory against West Rowan in the Dale’s/Sam Moir Christmas Classic consolation game was a step in the right direction.

“I was awake all night,” forward Bryanna Troutman said, after defending champion Salisbury (10-1) bounced back from Friday’s buzzer-beating loss to South Rowan. “All I could think about was how we’ve got to do better.”

Troutman shot only 6-for-20 from the field, but posted her third double-double of the tournament, contributing 18 points, 11 rebounds and eight steals. Teammate Anayia Fulson, the silky-smooth guard with long-range accuracy, went 8-for-15 from the floor and scored a team-high 24 points, helping Salisbury finish a weekend that had turned sour on a sweet note.

“It’s not really that good and not what we wanted,” Fulson said. “We should have been playing for the championship.”

Instead, they spent the game venting their frustration against third-seeded West (9-3). Salisbury wasn’t spectacular at anything, but it used a 9-0 second-quarter run to grab a lead it never relinquished.

“We seem to do better when we get up a little bit,” winning coach Lakai Brice explained. “When we get our energy and intensity going, we’re a much better team. But after a loss like that, you want to see how your girls are going to respond. I’d say we played a little better today.”

West didn’t. The Falcons shot only 7-for-31 from the field in the first half and fell behind, 32-22, when Fulson landed a late 3-pointer from the right side. They never inched closer than 58-51 — and that came after sophomore Abigail Wilson (24 points, 16 rebounds) hit back-to-back layups midway through the fourth quarter.

“Disappointed. That’s the only word you can use,” West coach Ashley Poole said, after the Falcons lost their second straight. “We didn’t play as a team. They didn’t listen. They didn’t do their jobs.”

West converted 20 of 63 field goal attempts and shot just 3-for-15 from three-point range. “We haven’t shot well in this gym all week,” Poole said. “We’ll be happy to get back home. But at the end of the day, you always learn something, so that’s a good thing.”

Salisbury didn’t shoot much better (24-for-68), but it scored enough to keep West in a challenging hole. The Hornets led by as many as 14 points on three occasions, the last when Troutman sank a last-minute free throw. The score was tied three times in the first half and the Falcons led for a total of 14 seconds after two Egypt Alexander free throws made it 9-8 late in the opening period.

“We just felt like we had to pick it up today,” Troutman said. “Our mindset had to change. We knew everybody was gunning for us — and that loss opened our eyes to a bigger picture. This is just the Christmas tournament. We want states.”

Even so, a better showing would have made for a hollier, jollier Christmas.

“It’s third place,” Brice said. “Not the prize we were after. But we’ll build from this and get ready for our next game.”