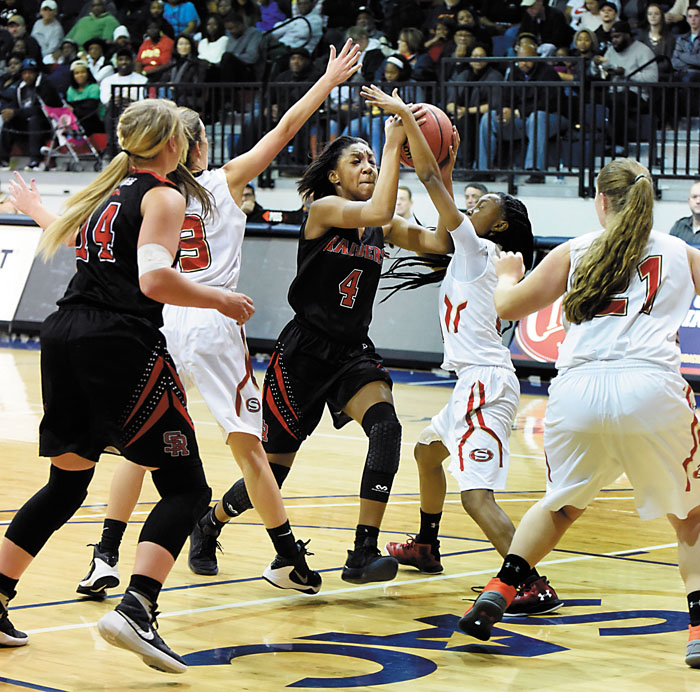 The Raiders will crash any party — and their dramatic, semifinal upset of top-seeded and previously unbeaten Salisbury on Friday ignited a celebration of Times Square proportions.

“We’re not surprised. We came to play and played the game,” coach John Davis said at Goodman Gym, where South used Tazah Hardin’s last-second layup to stun the Hornets, 59-57, and claim a berth in tonight’s Dale’s Sporting Goods/Sam Moir Christmas Classic final. “We don’t care if it’s Salisbury or someone from our conference. It’s not a party to us, it’s the Christmas tournament — and we’re having fun.”

South (8-3), the No. 4 seed, will chase its fifth championship — and first since 1991 — when it meets second-seeded Carson (11-1). The Raiders are, in a strange way, a dangerous team. Winners of seven straight games, they continue to surprise everyone but themselves.

“I’m not really surprised,” sure-footed junior Janiya Downs said after leading South with 28 points, 22 rebounds and five blocked shots. “This is what we’ve been after.”

They got there by erasing a seven-point, second-quarter deficit and tying the score 33-33 early in the third period. Then after giving away all of an eight-point, fourth-quarter lead they survived a breath-taking race across the finish line. “We knew we had the potential to do this,” said South guard Riley Corriher. “It really feels good.”

The Hornets of old would have put this one away when they had the chance. But this team, headed by junior forward Bryanna Troutman, couldn’t hold a last-minute lead and turned the ball over twice in the final seven seconds — first when Anayia Fulson was whistled for a backcourt infraction on a contested inbounds pass and again when Janika Glenn traveled after snatching a rebound with 1.9 seconds to play.

“In that situation, I always tell them to go all the way into the backcourt to catch the pass,” Brice said. “You don’t ever want to catch the ball that close to the mid-court line. On the other one, Janika got the rebound but there was someone in front of her and she got called for traveling.”

That set the stage for Hardin’s game-winning heroics. Following a South timeout, Corriher was entrusted to inbound the ball from the right of the Raiders’ basket. Downs stationed herself just outside the lane and drew the 6-foot-1 Troutman as a defender.

“Three girls had to sell the play,” Davis said. “First Janiya had to back off to take the big girl away from the basket. Then (Hardin) had to fake her way from one side of the floor to the other and sneak in unnoticed. Then Riley had to get her the ball.”

Said Corriher: “I sold it with my eyes. I was looking at Janiya the whole time.”

That left Hardin to finish the play with a soft kiss off the glass from the left baseline as time expired.

A layup that crashed the party.

NOTES: Corriher finished with 10 points, two assists and drew three charges. … Troutman made just three of 13 field goal attempts, but finished with a double-double (11 points, 10 rebounds). … South hasn’t reached the tournament final since 2001, when it fell to East Rowan. Carson beat the Raiders, 49-41 on Dec. 6. … Salisbury will host South in a CCC match next Friday.