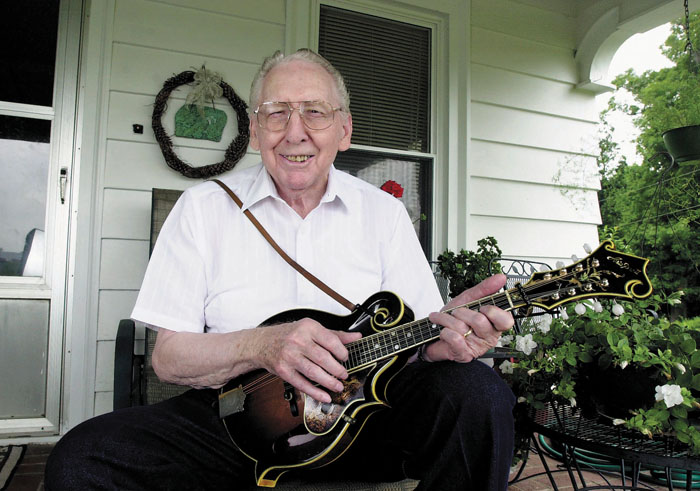 Jon C. Lakey photo In an Aug. 2, 2003, file photo, John ‘Curly’ Seckler holds a mandolin on the front porch of his sister’s house off Lipe Road, near where he grew up. He used to play with the famous Flatt and Scruggs bluegrass country band.

Curly Seckler, who made a name for himself singing and playing with Flatt and Scruggs’ Foggy Mountain Boys and other bluegrass greats, died Wednesday in Hendersonville, Tenn.

He had just turned 98 on Christmas Day.

Seckler was born as John Ray Sechler — note the different spelling — on a farm near China Grove in 1919. He was the fourth of Carrie and Calvin Sechler’s eight children.

Though he was christened “John,” Seckler didn’t have any hair until he was four months old. It came in curly, and he would never shake the nickname.

When he went into the music business later in life, Seckler changed the spelling of his last name because it kept being mispronounced as “Setch-ler.”

His parents introduced all their children to music at an early age. Calvin played the autoharp; Carrie, the organ and guitar.

Calvin would die when Curly was only 9, and Curly stopped attending school after the sixth grade because he was needed on the family farm. The children picked a lot of cotton among their many other chores.

In time, Seckler learned to play banjo under the tutelage of Happy Trexler. By 16, he was working in a cotton mill and with his earnings bought his own first banjo.

Seckler and his brothers Marvin, George and Duard eventually formed a group called the Yodeling Rangers in 1935. They landed a daily program on Salisbury radio station WSTP.

When he was 19, Seckler and his musical talents grabbed the attention of Charlie Monroe (Bill Monroe’s brother), and he hired Seckler to sing in his group the Kentucky Partners.

Seckler made his first recording with Monroe in 1946, and early in his career, his obituary said, Seckler teamed with bluegrass notables such as Mac Wiseman, the Stanley Brothers, Jim and Jesse McReynolds and the Sauceman Brothers.

Seckler’s biggest break came in 1949 when he joined the Foggy Mountain Boys of Lester Flatt and Earl Scruggs. Seckler became identified by his percussive chop style of playing the mandolin and his tenor voice.

Flatt called Seckler one of the best tenors in bluegrass.

Seckler played with the Foggy Mountain Boys until 1962 and would record more than 130 songs with the group, which was most popular in the 1950s.

They appeared countless times on the Grand Ole Opry and in numerous television markets throughout the Southeast.

Seckler left the music business for much of the 1960s to become a truck driver. But in 1971, he recorded a solo album titled, “Curly Seckler Sings Again,” which won some critical acclaim.

Seckler continued making many appearances at concerts and festivals. In 1995, he released the album “60 Years of Bluegrass with My Friends.” He recorded his last album, “Bluegrass, Don’t You Know,” in 2006.

With the Nashville Grass, Seckler became an important mentor to musician Marty Stuart.

Penny Parsons authored his 2016 biography, “Foggy Mountain Troubadour; The Life and Music of Curly Seckler,” in 2016.

Seckler’s funeral will be held Monday in Nashville, and he will be buried at Forest Lawn Memorial Gardens in Goodlettsville, Tenn.