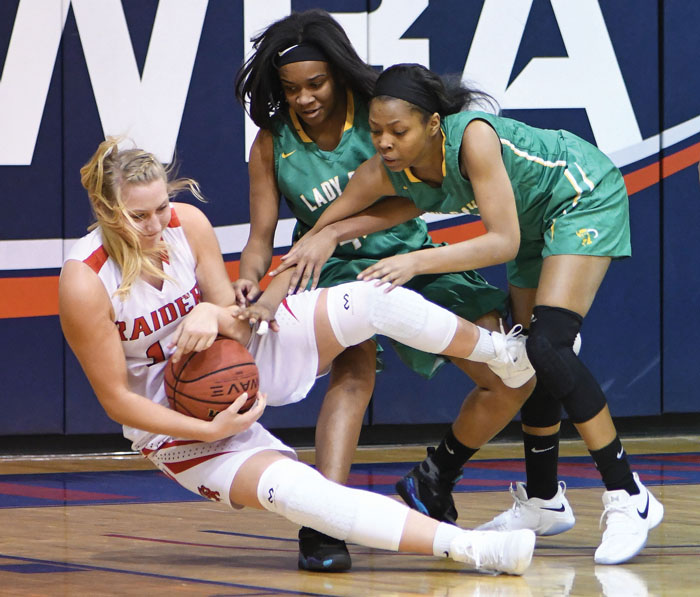 SALISBURY — South Rowan’s girls were far from perfect in Thursday’s first-round victory against North Rowan. Good thing there was plenty of room for error.

The fourth-seeded Raiders limited North to three field goals and a record-low 12 points in a 47-12 triumph at Goodman Gym, site of the annual Dale’s Sporting Goods/Sam Moir Christmas Classic.

“We did what we needed to do — get that 40-point clock running,” coach John Davis said after South (7-3) won its sixth straight game and earned a berth in today’s 6 p.m. semifinal against Salisbury. “We were able to get everybody some playing time and get ready for tomorrow.”

“I laid a goose egg,” said North coach Ron Bost. “I’ve got to do a better job than that. We’re a flat team right now. We knew what we were coming in to — Downs and Hardin. We knew they were aggressive players, but couldn’t stop them. I’ve just got to find a way to fix it and get us to play better.”

South was paced by junior guard Janiya Downs, who put up 21 points, nine rebounds and five steals. Teammate Tazah Hardin shot 7-for-9 from the field and scored 17 points.

“We’re just a quicker team than they are,” Downs said after converting seven of 15 field goal attempts and drawing tons of contact. “They’re pretty young. We have more experience.”

While North struggled, South had scoring runs of 16-0 and 12-0 in the first half. Another scoring spree — this one 10 unanswered points — opened the third quarter.

“It feels pretty good. I like how we won,” said Hardin, a senior point guard. “We won with communication, by playing good defense and keeping the ball moving.”

South used a put-back by Downs to open a 21-1 lead early in the second quarter. It went from bad-to-worse for the Cavs when they were issued a technical foul for trying to use an unlisted player — Nyanna Hillie, whose name wasn’t entered in the official scorebook.

North shot only 1-for-17 from the field in the first half. The one came when junior McKenzie Shoaf beamed in a 3-ball from the left side with 5:36 remaining in the second quarter.

“Not only did we not shoot well,” Bost said, “we hardly shot the ball. We’re still trying to learn what a good shot is. I have to stop practice sometimes and ask a girl, ‘Why didn’t you take that shot?’ She’d answer, ‘I wasn’t open.’ When in fact she was open, but didn’t recognize it.”

North spent the game trying to connect the dots. South, meanwhile, turned it into a hardy round of batting practice after Hardin’s fastbreak layup made it 46-6 with 4:20 remaining in the third quarter, triggering a running clock the rest of the way. The Raiders now turn their attention to top-seeded Salisbury (9-0).

“We’ve got to play better, but they have to play better too,” Davis said. “They were down against Davie early on and played better in the second half. We’ll just have to go out here and have an old-fashioned, 2A Carolina Conference basketball game.”