Salisbury boys advance to final with win over North Rowan 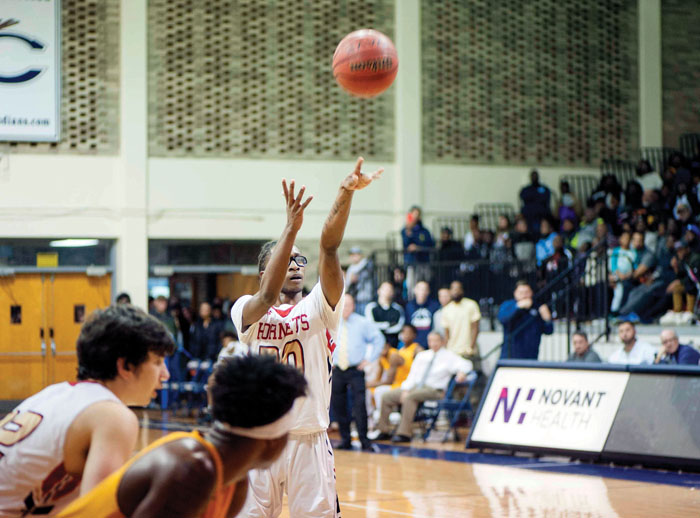 “I never thought we were in real trouble,” said Salisbury’s explosive senior guard Trell Baker. “Because we were always positive. No matter what, we kept playing and we kept coming.”

Baker fouled out with 18 seconds left in overtime, but by then he had scored 29 points. The senior keyed a 67-63 Salisbury victory that puts the Hornets (10-0) in tonight’s 8 p.m. championship game. It’s a dream matchup — undefeated Salisbury against undefeated Carson (11-0) — and someone’s perfect season has to end.

Friday’s semifinal wasn’t the dream matchup for Salisbury, it was the nightmare matchup. North always saves its best for Salisbury and beat the Hornets two out of three last season. The 1A Cavaliers left it  all on the Goodman Gym floor again. They did a lot right. They had more blocks, more offensive rebounds and fewer turnovers than the second-seeded Hornets.

“I loved our effort —we played as hard as we have all year,” North coach Martin Unger said. “But Salisbury has a great player (Baker) and great players make great plays.”

“It was crazy, just a great game, typical North vs. Salisbury,” Hornets coach Bryan Withers said. “Trell was special, Oshaun did the little things, and I thought we did some good stuff.”

North suffered an amazing amount of self-inflicted wounds at the foul line. Free throws are a point of emphasis at every North practice, but somehow the Cavaliers went 22-for-49 — that’s 44.9 percent— on those uncontested 15-footers. Volunteers from the bleachers probably can shoot 22-for-49. Page went a decent 9-for-13 from the stripe, but he was an exception.

“We didn’t quite have our legs on our jump shots tonight, so we talked about constantly attacking the rim,” Unger said. “And that’s exactly what our guys did. We’re young, but we went out and executed the plan. We attacked and we got to the foul line, but we just didn’t make the free throws. You can’t miss 27 free throws and expect to beat Salisbury.”

It was 29-28 Salisbury after a fierce first half.

North Rowan inched in front, 39-38, at the end of the third quarter when Goodlett grabbed a defensive board and coast-to-coasted on the Hornets.

“It was a hard game,” Withers said. “Our defensive traps weren’t working as well as they normally do on the big floor. I didn’t think our bigs weren’t physical enough. And I thought we got away from playing for each other some. With a big crowd like that, guys will sometimes get individual.”

When Page rose and knocked down a 3-point shot from the left corner with 6:08 left in regulation, the Cavaliers were ahead 45-40, but North missed several chances to add to its lead over the next minute, and then the Hornets roared back. Xavier Kesler’s jumper chopped into North’s lead before Baker nailed a tying 3-pointer from right in front of the Salisbury bench.

North pushed back in front by four on clutch buckets by David Broaddus and Quintous Smith Jr. North fans were screaming, but Baker struck again, this time with a 3-ball from deep on the right wing.

It was a dogfight from there to the end of regulation. Page and Cooke had chances to stretch  North’s lead late, but both went 1-for-2 at the line. North led 54-52 when Salisbury’s Jahbreel Russell flew to the rim with 14 seconds left and calmly banked in the layup that would force overtime.

Jaquan Davis made only one bucket all night, but it was the one that put the Hornets on top to stay with 3:11 left in OT. Robinson made the pass that created the layup for Davis.

Robinson swooped in for a runner that put the Hornets up 59-56, and after the Cavaliers missed a hasty 3-pointer, Baker converted a miraculous three-point play, flipping in a circus shot as he was fouled by Cooke. That maneuver put Salisbury ahead, 62-56.

“I just shot it, I don’t how that went in,” Baker said with a laugh. “But the biggest thing late in the the second half and in overtime was turning up our defense. We didn’t play good defense at all in the first half.”

Baker fouled out with 18 seconds left, running into Page on a 3-point shot. Page made his first two free throws to slice Salisbury’s lead to 65-63. When he missed his third charity shot, Goodlett soared for the rebound and drew a foul. Goodlett had a chance to tie it, but he missed both free throws.

Robinson seized the critical rebound on the second miss, and North had to foul him. The senior stepped to the line with 11 seconds left and made two free throws for a four-point lead. That sealed it.

“I just wanted to show some leadership and didn’t want to let my teammates down,” Robinson said. “We won because we stepped up our defense when we had to. We moved more and we talked more.”

Salisbury will seek its 15th tournament title tonight against Carson at 8 p.m. North Rowan will play in the 4:30 p.m. third-place game against Davie County.