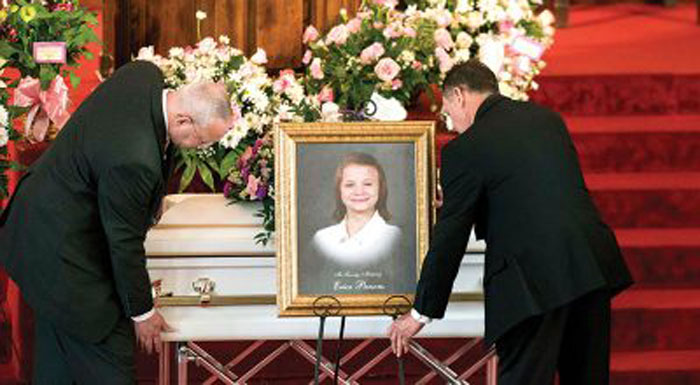 Brent Lyerly, left, and Jeff Moore bring Erica Parsons’ casket in and set up a portrait of her before her funeral at First Baptist Church in Salisbury in February 2017. Jon C. Lakey/Salisbury Post file photo

SALISBURY — What takes the top priority for Rowan County Sheriff Kevin Auten and others in his command staff in 2018 is bringing a resolution to the Erica Parsons case. The case, which began in 2013, has been one that crossed state lines, involved federal authorities, countless interviews with her adoptive parents and now in its final stages remains in the hands of the state medical examiner’s office.

Auten said this week it’s been frustrating to him and investigators because the N.C. Medical Examiner has not released her findings a year after investigators delivered the young girls’ remains to them in September 2016.

“Our investigation is done. We are waiting on them. We’ve done all we can do at this point,” Auten declared.

He said he understands this is a complicated case, but notes that it’s been a year since the Medical Examiner’s Office performed an autopsy of the girl’s remains. Dr. Deborah Radisch is North Carolina’s chief medical examiner.

Auten added that without those results the Rowan County District Attorney’s Office is also in limbo.

“We understand Brandy Cook doesn’t want to move forward with it until that report comes in,” he said.

Erica, who was adopted by Sandy and Casey Parsons at just a few months old had been missing since November 2011, but not reported missing until July 2013 when her adoptive brother, Jamie Parsons, told Sheriff’s officials he had not seen her in nearly two years.

Rowan Sheriff’s investigators conducted searches of the Parsonses former homes and that of their parents as well as other properties throughout the county. But in September 2016, Sandy Parsons, Erica’s adoptive father, led Rowan authorities to a shallow grave in Chesterfield County, S.C. where Erica was buried.

Authorities have said the only thing that remained of the 13-year-old girl in the crude grave were skeletal remains. No charges have been filed against Sandy or Casey Parsons except for financial fraud, tax fraud and other related offenses after it was determined the couple were still accepting adoption assistance and food stamps for the girl even though she was not still living with them.

Casey and Sandy remain in federal prison serving 10 and eight years, respectively, for fraud among other offenses.

Sheriff’s Detective Chad Moose said he too wants to see the case come to a resolution. Moose, a 25-year veteran officer, said, “the Erica Parsons case is my No. 1 priority.”

Moose not only worked tirelessly to find Erica, he was also awarded possession of Erica’s remains and coordinated her funeral and burial.

Moose said he will also continue the partnership with the Salisbury Police to help curb violent crimes in the city and county.

Auten said in addition to a resolution in the Erica Parsons case he also has plans to continue to address the local opioid crisis in 2018.

This year, law enforcement authorities, rescue personnel and hospital officials have reported numerous drug overdoses, most of which were heroin or other opioid derivatives. The high volume of calls emergency responders have gone to has called into question the use of Narcan, the opioid reversal drug, as well as how can addicts receive help to battle the disease.

Auten said he’s been looking at other surrounding counties to see if those law enforcement agencies are providing programs that can be of similar benefit to Rowan County citizens. Auten has looked to Rutherford County where its sheriff’s office has embarked on a pilot program that begins with inmates receiving counseling and monthly shots of a drug that blocks opioid cravings. The former inmate would then meet with representatives from a group designed to continue the support after release.

He said he has a planned visit to New Hanover County where the sheriff’s office there has launched a pre-arrest drug diversion program designed to divert low-level offenders who otherwise may have been involved with the criminal justice system and get them the help they need.

The problem that exists is there are a number of promising programs that can be implemented in Rowan County, but funds and infrastructure need to be in place in order to see those programs become successful, Auten said.

He added that if the local opioid issues are addressed it would most certainly affect crime. There is a correlation between drug users and property and violent crimes, he noted.

Burglaries have also dropped by about 11 percent from 308 last year to 277 as of November. Even though violent crimes have decreased, Auten said property crimes, specifically motor vehicle thefts are up this year.

He said the challenge for law enforcement becomes how can they partner with the community to combat these types of crimes.