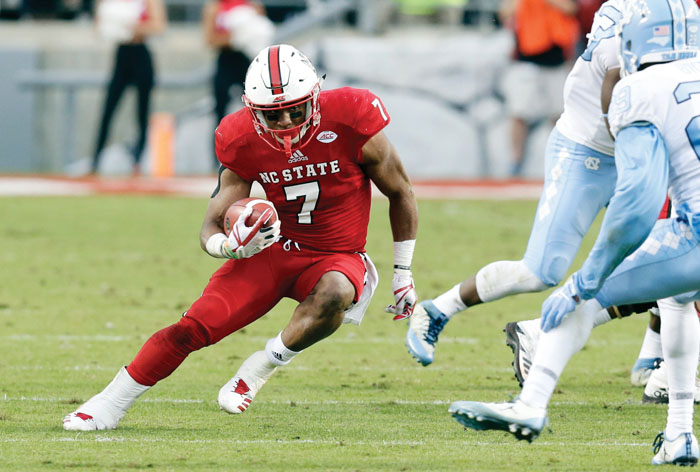 File- This Nov. 25, 2017, file photo shows North Carolina State's Nyheim Hines (7) running against North Carolina during the first half of an NCAA college football game in Raleigh, N.C. The Wolfpack (8-4) is seeking the second-most wins in school history, and trying to stay in the final College Football Playoff rankings. N.C. State was No. 24 going into bowl season. “This year it’s really important to have a Top 25 finish,” Hines said. “We haven’t done that yet since I’ve been here.” (AP Photo/Gerry Broome, File)

N.C. State seeks its ninth win, the second-best total in school history, in its fourth straight bowl trip under Dave Doeren, who has six postseason trips in seven seasons as a head coach. Arizona State wants to send coach Todd Graham out on a winning note after he was replaced by former NFL coach Herm Edwards, who will have a unique role that resembles that of a pro general manager.

Arizona State has one of the nation’s best offenses inside the 20 and is facing perhaps the most experienced defense in the FBS with eight seniors. That’s not counting N.C. State DE Bradley Chubb, who is expected to skip the game because he is a projected top 10 pick in the NFL draft. ASU running backs Demario Richard and Kalen Ballage have combined for 1,634 yards rushing and 18 touchdowns.

N.C. State: Junior Ryan Finley is second to Philip Rivers in school history with a 62.3 percent completion percentage. He’s also the first since Rivers in 2003 to open the season with consecutive 300-yard passing games. Finley had a nation-leading streak of 339 passes without an interception stopped at Notre Dame on Oct. 28.

Arizona State: Richard needs 23 yards to become the first ASU running back with multiple 1,000-yard seasons since Freddie Williams in 1974-75, when the Sun Devils were still playing in El Paso regularly as members of the Western Athletic Conference. He’s the fifth 3,000-yard rusher in school history.

The Sun Devils’ first bowl game was a 0-0 tie with Catholic in the Sun Bowl on Jan. 1, 1940. It’s their only tie in a bowl game (14-14-1). … Nyheim Hines has 1,040 yards rushing, giving N.C. State consecutive 1,000-yard rushers for the first time since 1977-78. With 7 yards receiving for Kelvin Harmon, the Wolfpack can have a 3,000-yard passer and 1,000-yard rusher and receiver for the second time in school history. … ASU WR N’Keal Harry is the only true sophomore in the country with at least one catch in all 24 games. He is third nationally with four fourth-down conversion catches this season. Harry has 957 yards and five touchdowns. … N.C. State LB Germaine Pratt has two touchdowns — an interception return and the recovery of a blocked punt in the end zone. He’s the first defensive player with multiple TDs for the Wolfpack since David Amerson, who had an ACC-record 13 interceptions in 2011.