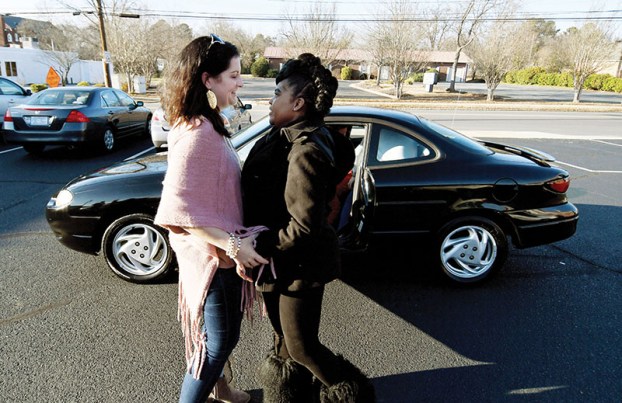 Christina Turner, right, has been praying for two years for a car so she would not have to rely on public transit to carry her to the grocery store and doctors appointments for her and her two children. On Dec. 21, Molly Bronson, left, donated her 2001 Ford Escort, to Turner. Jon C. Lakey/Salisbury Post

Editorial: The blessing of wheels

Geographic mobility has a lot to do with economic mobility. If you have trouble getting to job interviews, doctors’ appointments or even the grocery store, the chances of improving your economic lot in life are slim.

So the donation of a car to young mother Christina Turner here last week was more than a feel-good gift. When the Pregnancy Support Center and generous donors Molly and Lee Bronson partnered to answer Turner’s prayers for a car, the prospects for Turner and her children improved. The car could open a door to opportunity.

Coincidentally, Post reporter Shavonne Walker spent a day with Turner two years ago as Walker worked on a story about people struggling to make ends meet. It was a day of waiting at bus stops and riding buses from place to place, with Turner carrying her infant daughter in her arms. Her son stayed with a grandmother to save the extra fare.

The Pregnancy Support Center has a store where clients like Turner can “buy” diapers, baby clothes and other items with vouchers. They earn the vouchers by participating in educational classes, maintaining appointments at the center and engaging in community activities. That required a lot of trips across town for Turner, who memorized the bus schedule and regularly used the vouchers.

The city bus system is a godsend to those who lack their own vehicles. But now that Turner has a car — a 2001 Ford Escort — she’ll spend less time waiting for the bus and more time doing things for her children and looking for a job. She’s no longer limited by city bus routes and schedules.

“I can’t wait for the day when I have a good job,” Turner said in 2015. She was receiving food stamps and Medicaid but said she wanted to get free of that “crutch,” as she called it, and stand on her own.

A 2015 article in The Atlantic focused on the relationship between poverty and transportation. “Access to just about everything associated with upward mobility and economic progress — jobs, quality food, and goods (at reasonable prices), health care, and schooling — relies on the ability to get around in an efficient way, and for an affordable price.”

A donor helped Turner in the affordability department by paying for six months of car insurance and some gas cards. After that, she’s on her own to keep the car in running order. Owning a car can be a mixed blessing; maintenance costs money. But lacking a car or truck exacts a cost, too.

Laurels to the many ways people in Rowan County reached out to help others this Christmas. Our modern-day gifts of... read more