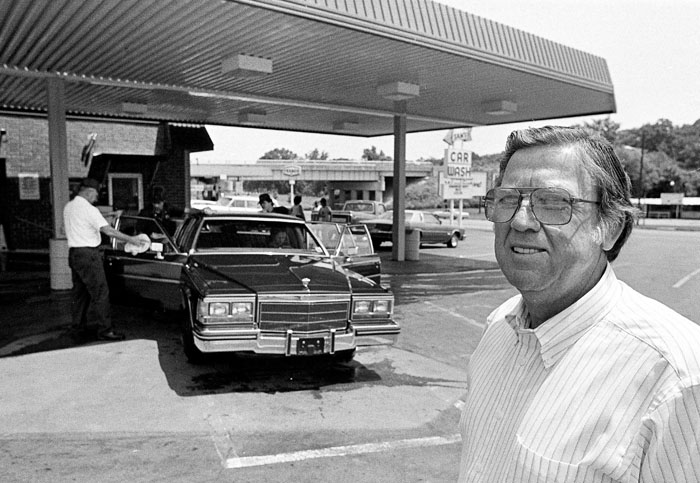 SALISBURY — In Salisbury, Sam Allen Jr. clearly was the King of Car Washes.

Bucking many trends, Allen took an $18,500 investment in equipment in 1962, bought a piece of property and put six men on each car as he established the first Sam’s Car Wash on West Innes Street.

Back then, he charged $1.75 a vehicle. By 1968, Allen had opened a second location — Sam’s Kwik Car Wash on East Innes Street — and soon it wasn’t unusual for the two places at peak periods to be washing 500 cars a day.

Allen passed his carwashing genes and genius to sons Glenn and Sam and grandson Dwight. Today, the Sam’s name remains central to a family business, affixed to carwashes in Salisbury, Lexington and Concord.

Sam Allen Jr., who always remained pleased and fascinated to see dirty cars come into Sam’s and sparkling cars go out, died on Christmas Day at the age of 98.

Glenn Allen said Thursday his father was a perfectionist when it came to business. He had a tremendous work ethic and wanted his customers to be treated with respect and enjoy good service.

“You give them a good service, and they’ll come back,” Glenn said was one of his father’s favorite sayings.

Sam Allen was a self-motivator, a self-driver, Glenn said, and he instilled those qualities in his sons. He told them to take pride in their work, and as difficult as it may sound, “Don’t worry about the money.”

“If you do,” Glenn Allen said, repeating his father, “it probably won’t be there.”

It’s hard to believe, but Sam Allen Jr. retired from the carwash business in the late 1980s when he left the operations to Glenn and Sam III.

“He had a lot of confidence that we could run it and run it in his image,” Glenn said.

In the retirement years to come, Sam and Joyce, his wife of 70 years, built a house at Cape Hatteras, where Sam could pursue his favorite pastime — fishing.

They liked taking the camper to Florida in the winter. The family started calling them “snowbirds” because of all the time they were spending there. JON C. LAKEY / SALISBURY POST The sign at the Sam’s Car Wash on West Innes Street was changed in memory of the company founder Sam Allen who passed away on Christmas Day.

In Salisbury, Sam and Joyce Allen moved into one of the first cottages at Trinity Oaks in the late 1990s. About 10 years ago, not long after they had sold the Hatteras house, Sam learned he had chronic leukemia, which was treatable for many years with light doses of chemotherapy.

Joyce often found herself in the role of caretaker. The couple moved from their Trinity Oaks cottage to the big apartment building on campus about two years ago. Sam eventually transferred to the skilled nursing part of Trinity Oaks, and he died Monday at the Kiser Hospice House in Salisbury just three days after his birthday.

His funeral will be Saturday, on what will be Joyce’s 90th birthday.

Allen hit the signature moment in his business career at age 42. He was restless and asking himself what he was going to do with his future.

At the time, he owned and operated an Esso service station on South Main Street. Glenn says he was 12 or 13 and working at his father’s station one Saturday when they washed the cars of 25 different customers.

Sam Allen wondered if the sidelight carwashing enterprise had potential on its own, and he embarked on some research, talked with people in the business and made some connections to find out more.

Someone eventually told him to look at some equipment for sale in Winston-Salem.

Allen recalled his initial reaction when talking with a Post reporter in 1983:

“I said, ‘Lord, no, I don’t want to wash any cars.’ But it was intriguing. It was something that was fascinating.”

To much fanfare, the car of famed Salisbury actor Sidney Blackmer was the first to receive a full-service wash at Sam’s in 1962. Meanwhile, Allen kept his service station on South Main Street for two more years to cover some of the initial losses at the carwash.

Joyce ran the cash register and worked the first three years at the carwash without pay.

Allen stressed quality service, kept plowing money back into the business and believed in state-of-the-art equipment. Over the years, he had many loyal employees and customers.

“He was always full of ideas and worked a lot of hours, but he always made time for family,” Glenn Allen said.

Sam Allen’s industriousness ended up defying an early axiom in the business that said a city should have at least 40,000 people for a full-service carwash to be successful.

Allen — and then his sons — bucked that trend from the start. Two Sam’s carwashes have flourished here, and the city still hasn’t reached the 40,000 in population after 55 years in business.

Allen believed in a clean car and, understandably, urged a regular schedule for cleaning because he thought people should take care of one of their biggest investments. For years, the sign outside the Sam’s Car Wash on West Innes was known for its clever slogans, which Allen said came from customers or industry magazines.

A native of Norwood, Sam Allen Jr. was a son of millworkers. He said once he wore out two bicycles on his newspaper route as a boy. He also worked in a Norwood diner. After high school, Allen attended a Charlotte business school.

Sam and his brother Jim, who was a meat cutter, started their own Spencer grocery store in 1942, but that business venture was abruptly halted by World War II, when both were called into active duty.

Sam Allen was stationed mostly in England until the war ended. On his return, he took a job with Standard Oil in Charlotte. The company sent him to places he was needed, including Greenville, South Carolina, Henderson and Edenton.

He told the Post he was a one-man operation in Edenton and enjoyed delivering gas, managing his own books and unloading the barges that brought in fuel. During his five years in Edenton, he met and married Joyce.

Allen stayed with Standard Oil and wanted to move back to Stanly County to be close to his mother. The company initially had an opening at the Esso plant in Salisbury, but when that position was filled by someone else, Allen was offered a lease on the South Main Street service station in 1951.

Who knew it would lead to the mini carwash empire?

Looking back, Glenn Allen thinks his dad’s greatest legacy might be this:

“Dad created something he enjoyed,” Glenn said. “And I enjoy it, too.”