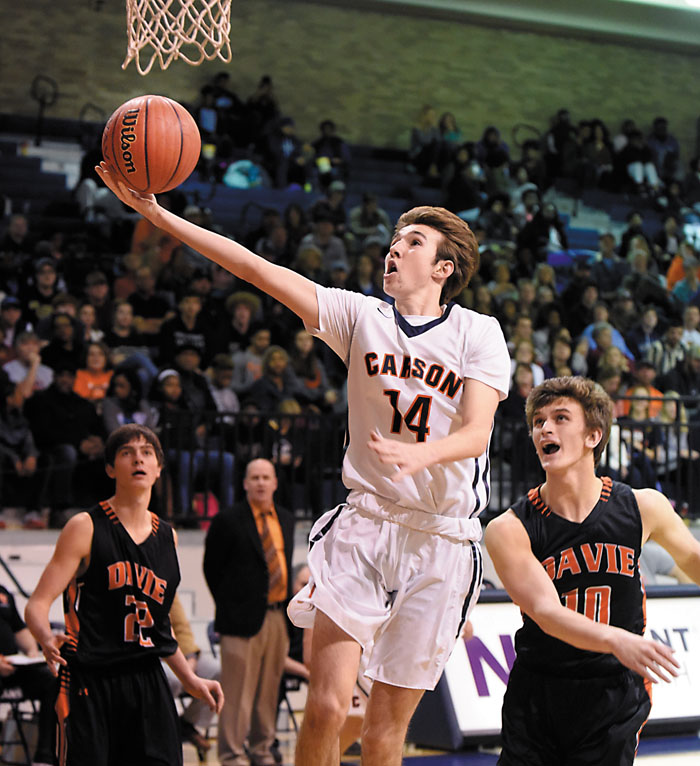 A final-round loss in 2016 has lived rent-free in its head for a full calendar year — and it still hurts.

“We’ve been waiting for this moment for a year,” senior Jamarius Hairston said Friday night, moments after top-seeded Carson earned a 63-47 semifinal win over Davie County and punched its return ticket to the final. “We kind of knew we had a target on our backs this year, but we wanted to showcase what kind of team we are. We don’t have big numbers or big size, but when we lock in we are tough to stop.”

Carson (11-0) has carefully navigated its way through a tournament minefield and reached tonight’s championship game, where it faces unbeaten Salisbury for the crown.

“We got a terrible draw,” said Carson coach Brian Perry, whose team has brushed aside defending champion West Rowan and Davie. “It’s not an easy path. But hopefully, we keep it going and will be ready to play well against Salisbury. They’re really strong as well and they just look good.”

So do the Cougars. They shot 47 percent from the field, knocked down six 3-pointers and won the rebounding battle against fourth-seeded Davie (8-3).

“One thing that beat us tonight was our transition game,” Davie coach Mike Absher said, after the War Eagles shot 15-for-50 from the field and lost to Carson for the second time in 10 days. “You can’t give them easy baskets in transition. And offensively, you have to be disciplined enough to make the extra pass. Sometimes you need that extra one to get the best shot. But we didn’t make them work enough, make them move enough tonight.”

Carson opened a 22-9 lead early in the second quarter when Hairston (19 points, 6 rebounds) drained a 3-ball from deep in the left corner. Davie drew within nine points at halftime, before the Cougars pushed the lead, 45-28, when Cam Prugh soared toward the hoop for an uncontested layup — only to swirl a gorgeous, behind-the-back pass to teammate Cole Perry, who finished the play.

“That’s just Cam being unselfish,” Perry said after contributing 16 points and eight rebounds. “It was a good momentum play that we all fed off of.”

The Cougars held Davie to one basket in the third quarter and built their largest lead, 52-31, when Owen White converted a free throw with 3.2 seconds left in the period. More importantly, they limited junior Michael Walton — Davie’s top scorer this season — to a quiet 13 points on 3-for-9 shooting.

“That was a key,” said Carson’s Jailen Williams. “Cam and Cole (Sifford) did a good job holding him down. They slowed down their best scorer, put the ball on our end and helped us get good looks.”

“Everything he had was hard work,” added Absher. “Even when he was able to get close, they made it difficult for him. That wears on you.”

In any case, 14-time champion Salisbury (10-0) presents another marquee challenge.

“We’ve passed two big tests already,” said Hairston. “We’ve stepped up and delivered the last two games. Now we’ve just got to give it our all tomorrow (Saturday).”