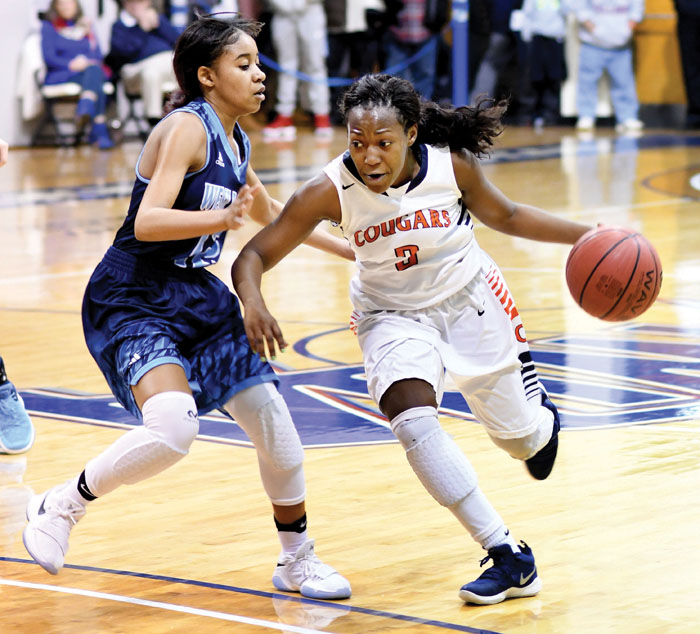 SALISBURY — Carson’s girls are consistent winners, and they’ll be in the championship game of the Dale’s Sporting Goods/Sam Moir Christmas Classic for the fifth time in the last eight years.

They haven’t won one yet, but they keep knocking on the door. They’ll try again tonight at 6:00, when the second-seeded Cougars take on fourth-seeded South Rowan, an upset winner over No. 1-seed Salisbury.

To get to the final, Carson had to survive a train-wreck of a semifinal against third-seeded West Rowan on Friday afternoon. Carson got 23 points from McKenzie Gadson and 19 points and seven assists from Olivia Gabriel to move on, 58-48. Gadson and Gabriel have been two of the county’s best players for a while. They proved that they still are.

“We shot poorly and we rebounded poorly, and there were just so many things that we didn’t do well,” said  Brooke Stouder, who logged her 150th win as Carson’s head coach. “But they’re not all going to be pretty. Sometimes you just have to be glad that you won a hard-fought game.”

The shooting was mostly awful. West’s 27.9 percent shooting day, included a dismal 2-for-21 from the 3-point line. Carson shot 36.2 percent, but that’s mostly because Gadson doesn’t miss many. She was 9-for-14. Carson shot 2-for-17 on 3s. That’s brutal, but at least the two 3s that went  in — launched by freshmen Colbie Perry and Ellie Wilhelm — were taken within the offense and were taken with teammates in rebounding position. Both were game-changers.

Third-seeded West (9-2) made it a battle because it has two exceptional paint players. Egypt Alexander has been struggling some, but the senior looked like her old self. She poured in 26 spinning, whirling points, mostly as the finisher on West’s press-break. Sophomore Abigail Wilson is always solid. She turned in an efficient 14 points and yanked down 18 rebounds. She was either stronger or more agile than the Cougars who were trying to keep her off the glass.

The first half wasn’t complicated. Both teams were dared to make an outside shot, and no one could. When Carson did manage to score and could set up its 1-2-2 press, with the long-armed Gadson at the top, the Cougars caused problems for West’s ball-handlers and decision-makers. West had 14 turnovers before halftime. That’s why Carson led 28-24 despite getting out-rebounded and despite shooting 0-for-12 on 3s.

“We talked about going 0-for-12 at halftime and we talked about having better shot selection,” Stouder said. “In the second half, we only took five 3s and we made two.”

West handled Carson’s press better after halftime, Alexander was unstoppable. The Falcons caught up and surged in front. Alexander’s three-point play with 3:28 left in the third quarter was high tide for the Falcons. They were up 36-33, and fans were roaring.

Gabriel made the game’s biggest play with 2:03 left in the third quarter. With the Cougars down 36-35, she drove hard, and Wilson was whistled for her fourth foul. Wilson sat down. By the time she returned to the floor, Carson had control of the game.

“We wanted to try to attack Wilson, try to get some fouls on her,” Gabriel said. “That turned out to be a play that helped us.”

Perry’s 3-pointer from the right wing swished and put Carson up 40-38. The teams headed for the fourth quarter.

Carson grabbed the game in the next few minutes, with a couple of streaking baskets by the speedy Gadson (Gabriel made the passes) sandwiching a 3-pointer by Wilhelm off an inbounds play. Gadson’s second bucket, she blew by retreating defenders, put Carson ahead, 50-42.

“I always try to run the floor hard, try to get my opponents tired,” said Gadson, who is also one of the county’s top track stars. “We needed to get some easy transition baskets because that was a tough and physical game. West’s inside players are very good.”

Wilson returned to the floor with 3:49 remaining, but it was too late. Carson was in keep-away mode for those last few minutes, and no one is better than Gabriel at closing out a game. She went 9-for-13 at the foul line and she’s not going to turn it over very often.

“We finished the game strong,” Gabriel said. “It’s just a lot of fun to play with McKenzie. She’s really fast, and if I get a rebound, I take one dribble and look up the floor for her.”

Gabriel, who was able to box out Alexander a few times, and Gadson had five rebounds each. Carson got a dozen combined rebounds from veterans Anne Marie Turney and Maren Shumaker.

Mary Sobataka made two 3-pointers, but Alexander, who was three points shy of her career high, and Wilson had to score 40 of West’s 48.

West had 20 offensive rebounds, eight more than the Cougars.

West will take on Salisbury in the 3 p.m. game today for third place.