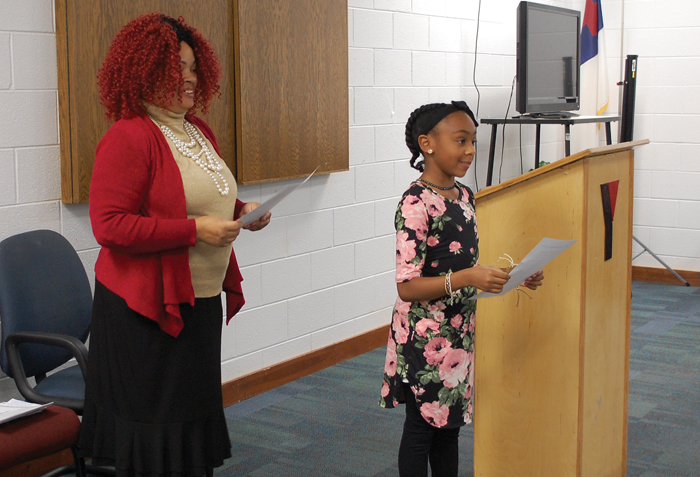 “When you say ‘kids’ to me, that is a goat jumping over the fence,” Miller Bates said. “And I feel like that is one of the reasons why our children act the way they do. … So let’s get used to calling them ‘children.’”

Empowering children was the theme of the evening at the second semi-annual Let’s Lend a Helping Hand Youth Service Awards, where children in the community chose the winning organizations.

Miller Bates accepted an award with her son for their work with Nightcrawlers, a group that walks the streets in Rowan County nearly every Friday night from April to December to help curb violence.

Nightcrawlers was one of 21 organizations honored at the ceremony, held at 6 p.m. Wednesday at the YMCA.

Latasha Wilks, president of Let’s Lend a Helping Hand, said she asked 1,084 youths — from kindergartners to college students — to vote for the organization that “impacted their lives most this year.”

“I think hearing from our youths can bring us all together because they are our future,” Wilks said. “The program shows me that they are paying attention more than we know. The youths need their voices to be heard.”

Wilks drove that point home by inviting 9-year-old Brooklynne Witherspoon, founder of Bridge 4 Kids, to be her junior mistress of ceremonies.

Brooklynne is president of Bridge 4 Kids, which she runs with her cousins. She started the program when her 7-year-old cousin, A’yanna Allen, was killed in a shooting last December.

Brooklynne said that when her cousin was killed, she decided to take action in her community.

“I also help kids with self-esteem and how to handle themselves now when they get stopped (at) a red light so they won’t shoot at the police. They’ll understand how to keep themselves calm,” Brooklynne said.

Brooklynne’s grandmother, Sharon Freeman, said she is inspired by her granddaughter’s vision for Bridge 4 Kids.

“Sometimes I really forget Brooklynne’s 9,” Freeman said. “But then I have to look at her and say, ‘Wow, look how the Lord guides her.’”

Gemstones Academy and COMPASS were also among the organizations honored. Co-founder Alex Clark — who has ALS — was particularly praised for his years of work with community youths.

“I actually thank the children for allowing me to be a part of their lives,” Clark said. “I would die helping the children. That’s what I do. We’re going to keep on until we can’t.”

When Clark finished his remarks, the assembled group gave him and co-founder Alisha Byrd a standing ovation.

Separate awards were also given to Alex Clark, Sharon Freeman, Javon Hargrave and the people behind Team-Up Tuesday.

Wilks said she is hoping to make the awards ceremony a quarterly event so that youths can honor organizations every three months.

For now, the next awards ceremony is scheduled for June. Wilks said that some youths have already submitted their ballots for it.

For more information on how to get involved, contact Latasha Wilks at latashawilks@gmail.com.