Ted Williams’ service in Korean conflict described in his letters 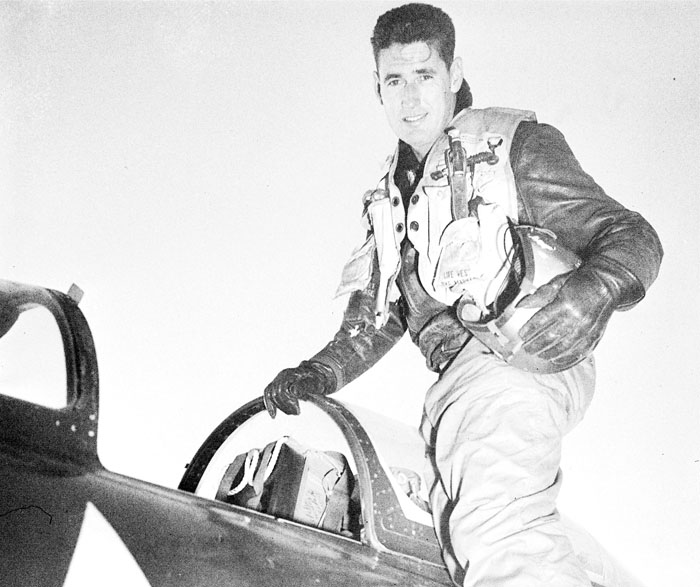 FILE - In this 1953 file photo, Capt. Ted Williams, former Boston Red Sox slugger, poses atop an airplane at a Marine air base in Korea after he crash landed his thunder jet at an advance airbase Feb. 15, 1953, on his first combat mission over North Korea against enemy targets. Thirty-eight letters from Williams to his girlfriend at the time are going to be auctioned on Jan. 3, 2018, at Saco River Auction in Biddeford, Maine. (AP Photo/Fred Waters, File)

BIDDEFORD, Maine (AP) — Thirty-eight letters penned by Hall of Fame baseball player Ted Williams, including one in which he described crash-landing a fighter jet with “holes all over” it, are going up for auction.

The letters written to his mistress show another side to Williams, who played for the Boston Red Sox, describing his second hiatus from baseball for military service, his bombing missions in Korea and his feelings on war and his father’s death.

“They’re his innermost thoughts during the Korean conflict,” said Troy Thibodeau, of Saco River Auction, which is putting the letters up for auction.

The letters were written to Evelyn Turner, a flight attendant, from 1952 to 1954, a period in which Williams trained in the U.S. and served in Korea as a Marine combat pilot. During the time, Williams served as wing man for future NASA astronaut and U.S. Sen. John Glenn.

He wrote to Turner the day after he crash-landed his burning F9F Panther after a mission. He only sprained an ankle, but it could’ve been far worse.

“I had holes all over the plane and I was riding on all the prayers people say for me ‘cause I was awfully lucky. My plane was burning like hell when I crash landed. Everybody around here now is calling me lucky. Anyway, I’m missing you,” he wrote .

Another letter written after his father’s death described Williams’ anguish and regret over having not spent more time with him.

Yet another alluded to a military radioman sabotaging his plane to keep it grounded for repairs in Florida so he could spend extra time with Turner.

The letters and other items from Turner’s estate will be auctioned Jan. 3 along with other baseball and celebrity memorabilia. Included are photos of Williams in Turner’s home, along with newspaper clippings and Turner’s writings about Williams.

Williams was married to his first wife, Doris Soule, during the romance with Turner. Their affair lasted a decade, said Turner’s son, Al Christiano. Williams and Soule divorced in 1954.

Turner and Williams broke up after he told her that she’d take third place — behind baseball and fishing — if they were to marry, Christiano said.

“She wishes every day that she’d said yes. But that was a decision she made at the time, and she had to live with it,” he said.

Their relationship is recounted in Ben Bradlee’s book, “The Kid.” Williams met her on a flight when she worked for the now-defunct National Airlines.

Williams’ flings come as no surprise, said Dick Johnson from the New England Sports Museum. “Ted was a lady’s man, certainly,” he said.

This isn’t the first auction of Williams’ love letters. Six letters to another mistress, Norma Williamson, fetched several thousand dollars in 2011, according to Chris Ivy, director of sports collectibles at Dallas-based Heritage Auction.