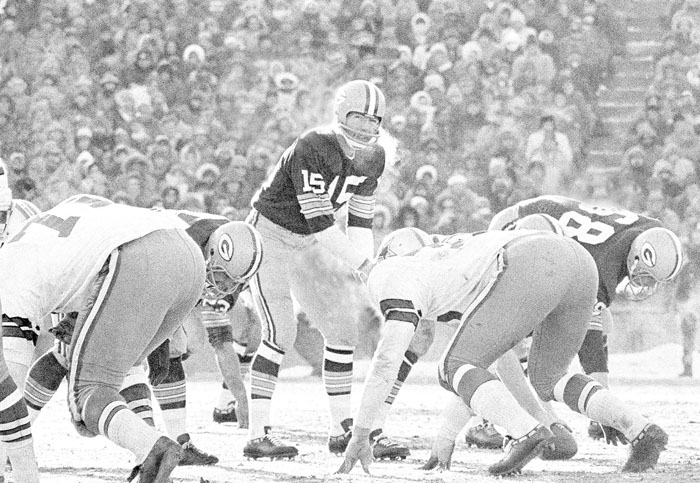 FILE - In this Dec. 31, 1967, file photo, Green Bay Packers quarterback Bart Starr calls signals in bitter cold as he led the Packers to a win over the Dallas Cowboys in Green Bay, Wisc. Fifty years later, players from the Packers and Cowboys still shiver from memories of the bitter cold of a game that would become known as the Ice Bowl. (AP Photo/File)

The penultimate day of 1967 was as beautiful as it gets in Green Bay in late December. Chilly, yes, but the Dallas Cowboys enjoyed the sunshine as they practiced at Lambeau Field for their New Year’s Eve game against the Green Bay Packers.

“You could work up a sweat,” said Dan Reeves, then a running back for Dallas. “You just knew the next day was going to be a great day for football.”

It was sure looking that way for everyone who loved the NFL. Bart Starr was under center for the Packers, and the Cowboys countered with Don Meredith and Bob Hayes, the 1964 Olympic 100-meter gold medalist. The Cowboys and Packers were meeting for the second straight year for the NFL championship, with the winner going to Super Bowl No. 2 (the NFL had yet to get around to Roman numerals) against the champions of the American Football League.

That night, opposing coaches Vince Lombardi and Tom Landry got together with NFL officials and other team members at the Oneida Country Club for a dinner. The mood was upbeat for a league still trying to digest the merger with the AFL and turn the Super Bowl into a must-see game.

Things were not so cheerful the next morning, when the wakeup call at the Holiday Inn sent startled players to their windows to see what it was all about.

It’s one of the defining games of the NFL, a contest played on tundra that truly was frozen by men who really weren’t prepared for the conditions. The game that became known as the Ice Bowl joined the 1958 NFL championship game and the 1969 Super Bowl as one of a trio of iconic contests in the space of a decade that cemented the league into the consciousness of America’s sports fans.

Cowboys executive Gil Brandt wasn’t thinking of history that morning as he stood in the lobby of the Holiday Inn in Appleton. He just wanted something to keep his feet warm as the Cowboys waited for the buses to take them to Lambeau Field.

He found them on the feet of one of the bus drivers.

“I asked if somebody would rent me their boots for $20,” Brandt said. “They said they weren’t boots but galoshes. But one guy rented me his.”

Players were just as ill prepared. They had long underwear and heaters on the sidelines but little else. For the Cowboys, that meant no gloves for their hands.

“Our (defensive) coach, Ernie Stautner, told our defense that we weren’t going to wear gloves. Said, ‘Gloves are for sissies,’” Cowboys lineman Bob Lilly said. “Well, we go out to warm up and all the Packers had gloves on.”

It was, as Sports Illustrated would write the next week, the coldest New Year’s Eve in the cold history of Green Bay.

“It should have been canceled, but I think the commissioner was watching the West Coast game in Oakland,” Dallas linebacker Lee Roy Jordan said. “He probably had a nice comfortable day out there.”

How cold was it? The reading at game time was 15 below, with wind chill in today’s calculations at minus-48.

It was so cold that when referee Norm Shachter blew the metal whistle to start play, it froze to lips. When he tried to pry it off, it tore a chunk of his lip off with it.

“He bled most of the game,” Jordan said. “After that, the NFL went to plastic whistles so it wouldn’t freeze to lips.”

Lambeau Field had heating coils underneath, but they were no match for cold this extreme. Compounding the mistake was putting a tarp over the field overnight, which kept moisture in that would later freeze when it was pulled off.

Every time Reeves shaves he sees the scar from a tooth that went through his upper lip when he slipped and fell on the frozen field, while Jordan still gets the shivers.

The Packers scored the first time they got the ball, with Starr mixing the running and passing game beautifully. The lead soon became 14-0, and the Cowboys looked like a team that wanted to be anywhere on Dec. 31 than in frigid Green Bay.

Hayes, the star Cowboys receiver, was so cold he kept his hands in his pants when his number wasn’t called, something Green Bay defenders quickly picked up on.

“The first mistake of the day was made by Bob Hayes when he came out of the huddle with his hands in his pants,” Packers offensive lineman Jerry Kramer said. “When he was in the pattern he took his hands out.”

The Cowboys managed to cut the lead to 14-10 at halftime thanks to a fumble recovery for a touchdown and a field goal. But the Packers still seemed in control until Dallas made adjustments at halftime and shut down the Packers’ offense for most of the second half.

Starr would be sacked a total of eight times, and when Reeves hit Lance Rentzel for a 50-yard touchdown pass on a halfback option in the fourth quarter to take the lead, the Cowboys seemed on their way to the Super Bowl in toasty Miami Beach.

“They were playing lights-out defense in the second half and we were getting our fannies kicked,” Dale said. “It wasn’t looking good.”

If it was cold on the field, it seemed even colder in the stands.

There, people fiddled with their kerosene hand warmers, trying to keep them lit. Fans layered in clothing jammed together on aluminum benches, the condensation from their breaths forming an eerie cloud of fog over the stands.

“The people were too cold to complain,” said John Des Jardins, who was 15 at the time and would later become a county judge. “We were all in our own little agony.”

Patrick Webb, now executive director of the Green Bay/Brown County Professional Football Stadium District, was 16 and worked parking cars down the street from the stadium. He later joined his father in the top row of Section 130, where he had a view down the goal line in the final moments of the game.

“My biggest reaction to how cold it was is when Bart went over (for the go-ahead touchdown), I jumped up and down and didn’t feel anything from my knees down,” Webb said. “I really felt like I was jumping on my knees at the time.”

Ten minutes before kickoff, Brandt looked around and saw no one in the stands. By kickoff, there were 50,861 people in the stadium.

“We didn’t have any choice, but we’re saying what are these people doing there?” Reeves said. “You were scratching your head and saying, good gracious what are they doing there? It shows you how tough those people are.”

On the sideline late in the game there was a three-inch frozen gob of snot sticking out of the nose of Landry, who was too engrossed in the game to notice.

On the field, players were just hoping the game would get over — and soon.

“Minus-15 and minus-55 chill factor — the only time I’ve ever been exposed to that, and I don’t care that if it’s the last time,” Dale said.

Late in the fourth quarter the field was a sheet of ice, looking more like an outdoor Wisconsin hockey rink than a place to play football. There seemed no way the Packers could mount a drive when they got ball back with 4:50 left in the game and 68 yards to the end zone.

But this was a championship team already, and Starr was the quarterback. The Super Bowl was at stake, along with a possible $27,500 for each player — more than some earned in the season.

“We went out for the huddle,” Starr said after the game, “and decided that if we were going to do it, it had to be now.”

A short pass to halfback Donny Anderson started the drive with some promise. As the clock wound down inside a minute, the Packers had made it to the 11-yard line.

A misdirection play fooled the Dallas defenders and got the ball to the 3. Two runs later it was at the 1 with 16 seconds left. The Packers took their final timeout.

Everyone in the stadium, including the players defending the goal line, thought Starr would try to throw for the winning touchdown, most likely on a rollout to get away from the fearsome Dallas defensive line, and the Packers would kick the tying field goal if the pass was incomplete. But Starr knew the Cowboys were having trouble getting their footing on the ice, so much so that Lilly said they discussed calling a timeout of their own to have someone come out with a screwdriver to punch some holes in the ice to get their footing.

The Packers rolled the dice. Starr called a “wedge” play normally designed for the halfback, and Kramer pounded his cleats into the frozen ground trying to get some traction for a block.

Starr took the snap, Kramer got underneath Jethro Pugh with one of the most celebrated blocks in NFL history, and Starr tumbled into the end zone for the winning score.

“Jethro was high consistently the three weeks before our game,” Kramer said. “I watched three films of him high at the goal line. Lilly stayed down, but Jethro’s first move was up. Obviously a mistake on the goal line. A wonderful football team, but a young football team. They made a couple mistakes and it cost them the ballgame.”

“It was a great call,” Jordan said. “I just wish Bart had slipped or something.”

The old 8 millimeter footage taken in the end zone shows fans half-delirious from the cold and the dramatic finish storming the field and tearing down the metal goal posts. Green Bay would go on to beat Oakland 33-14 in the second Super Bowl, but at the time, the NFL championship seemed like a bigger win.

The Packers went off to celebrate their 21-17 win, partying at Fuzzy’s, a bar near Lambeau Field owned by lineman Fuzzy Thurston.

“The celebration went on for most of the night,” Kramer said. “All of Green Bay and all of Wisconsin was having a good time. But Fuzzy’s heating system in the room he had reserved for us didn’t work, and it was so cold inside we could see our breath in the party room.”

The Cowboys wasted no time heading for the airport. On the team plane, players scavenged for blankets and drinks to keep warm.

“They heated the plane up pretty good. We got warmed up,” Lilly said. “But for years, when it would get cold, my hands would hurt so bad. And it affected our lungs, too. We had about half the team that smoked back then. As far as I can remember, about half of them quit.”

Barely a word was spoken the entire flight home.

“The happiest part of the whole deal was when we got on the airplane and took off and the red afterglow wasn’t quite dark, it was still glowing red,” Lilly said. “And we were alive and we were frozen, trying to thaw out.”

“And we were looking out and saying — all of us, I think — we were being thankful that we got out of there alive.”