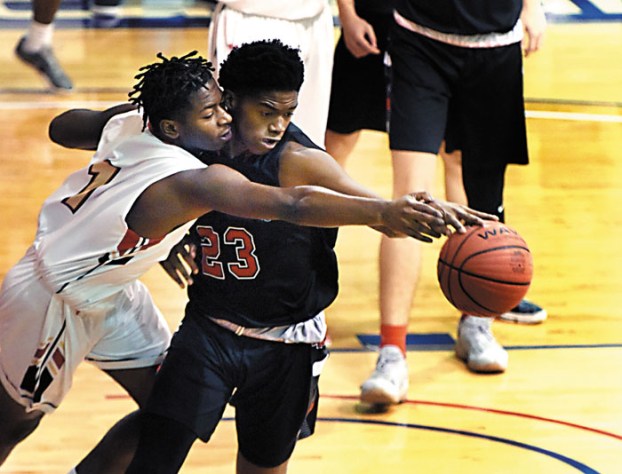 Salisbury boys pull away for win over South Rowan Salisbury’s Oshaun Robinson 20 driving for a layup . photo by Wayne HInshaw, for the Salisbury Post

But he’s trying to work on that.

Withers allowed himself to smile a little after Thursday afternoon’s 63-52 victory over South Rowan in the opening round of the Dale’s/Sam Moir Christmas Classic at Goodman Gym.

“My assistant coaches have been talking to me about enjoying wins more,” said Withers, whose Hornets are now 9-0. “I’ve just got to enjoy them. I don’t think I enjoy them enough.”

And the Hornets committed just 10 turnovers, a remarkable number, considering their up-and-down, “hair on fire” style of play.

“I know these guys aren’t going to be perfect, but one thing they bring is effort every night, I can tell you that,” said Withers. “We don’t look good doing it, sometimes, but we bring a lot of effort.

“In tournament play, you just want to get to the next round,” continued Withers. “We turned it over 10 times, and hey, that’s not bad. And we created 19 turnovers, so we did some things right.”

The Raiders, now 4-6, made 40 percent of their shots but just didn’t get to the basket enough, thanks to the 19 turnovers and their lack of aggression.

“That tells some of the story,” said South coach Andre McCain. “We weren’t aggressive enough to get fouled and get to the line. We were too timid for some reason, but we’ll learn from it, because we’re going to see that team two more times this season.”

McCain was referring to the fact that the Raiders are now in the same league with Salisbury — the 2A Central Carolina Conference.

“You can’t allow 20 offensive rebounds to your opponent and turn it over that many times,” added McCain. “Cutting those numbers in half will, obviously, give us a better chance. They hurt us in their long, extended 1-2-2, but the guys competed. We wanted to keep it as close as possible, so we could stay in our zone, but we had to go to man-to-man when they spread us out. Salisbury has some athletes — and shooters as well. And they get after it on both ends of the court.”

South had leads of 7-2 and 10-6 in the first quarter, but Salisbury’s Trell Baker and Xavier Kesler combined for all 17 of the Hornets’ points in the period. The score was 17-12, going into the second quarter and 28-21 at halftime.

The Salisbury lead peaked at 18 points, at 46-28, late in the third quarter, as Bill Fisher and Oshaun Robinson combined for 13 of the team’s 18 in the period.

South outscored Salisbury in the final quarter, 21-17, as Jordan Oglesby provided a spark off the bench by going 5-of-6 from the floor, on his way to 11 points. Bailey Graham, who had an off-day with his shot, did get hot late, ending up with 15 points on 5-of-13 shooting from the 3-point arc.

Baker led Salisbury with 17 points, followed by Kesler’s 15. Robinson had a double-double with 13 points and 10 rebounds.

But it was Kesler who brought the biggest smile to Withers’ face.

“Kesler can score,” said Withers. “He’s only a sophomore and he’s going to be special. He can really put the ball in the basket. His first Christmas tournament and I didn’t know how he was going to react, but I saw early, when he got in, that he wasn’t afraid and was very calm — more calm than some of the older guys.”

See coach, you can enjoy a win.

NOTE: Salisbury will battle old rival North Rowan it today’s semifinals at 4:30 p.m. South falls into the consolation bracket and will play East Rowan at 10:30 a.m.

By Tim Dahlberg AP Sports Writer The penultimate day of 1967 was as beautiful as it gets in Green Bay... read more