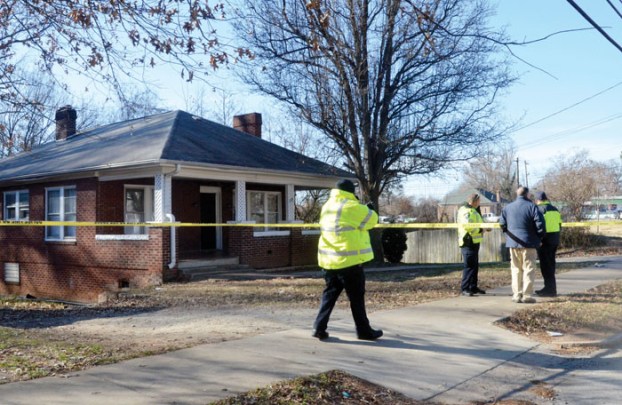 Salisbury police investigators along with Chief Jerry Stokes, center, stand outside at home at 115 East 11th St., off North Main Street, where a man was shot. He was responsive at the scene and taken to Novant Health Rowan Medical Center with non-life threatening injuries. No suspect has been arrested. Shavonne Walker/Salisbury Post

SALISBURY — Few details are available after a teenager was shot in the back Thursday afternoon outside a Salisbury home.

The victim was responsive and talking at the scene, Salisbury police officials said.

Capt. Melonie Thompson said officers responded to 115 E. 11th St., off North Main Street, to reports of shots being fired. The shooting was reported about 1:30 p.m.

A 19-year-old man suffered non-life-threatening injuries, Thompson said, though the extent of his injuries was not known. He was taken to Novant Health Rowan Medical Center by ambulance.

Police said the shooting occurred outside the home, which sits between a duplex and an empty lot and is across from Henderson Independent High School. It’s believed the teenager was visiting the occupants of the home.

One man was seen running from the area. A police K-9 unit was called in to search the area, but no suspect was located.

Officers obtained a search warrant for the home.

Police did not give a motive for the shooting. Officers were seen placing what appeared to be a gun case inside a paper bag for evidence.

The shooting comes four months after Jeffrey Allen Ramsey Jr. was shot in the parking lot outside Three Stars Mini Mart and later died at the hospital. Malik Eric Johnson, 21, was charged in the death of the 24-year-old.

Anyone with information about the 11th Street shooting is asked to contact the Salisbury Police Department at 704-638-5333 or Salisbury-Rowan CrimeStoppers at 866-639-5245.