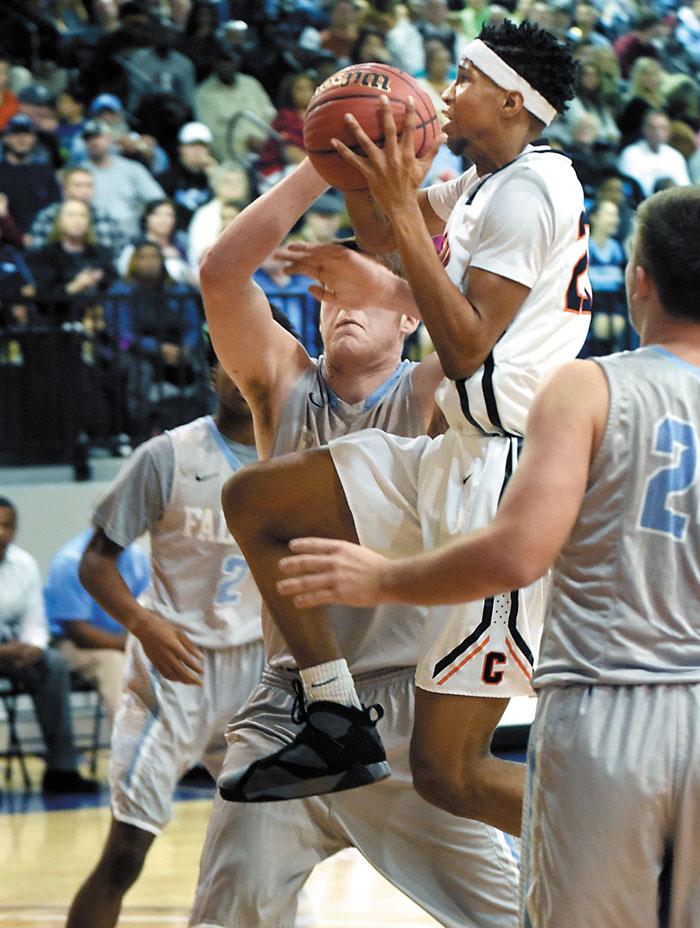 Wayne Hinshaw file photo/for the Salisbury Post ... In a file photo from last year’s championship game, Carson’s Jamarius Hairston (with ball) drives to the basket as West Rowan’s Caleb Mauldin (background) defends. West and Carson meet in the opening round this afternoon at 4:30.

A dream boys championship matchup of unbeatens— No. 2 Salisbury (8-0) vs. No. 1 Carson (9-0) — is a possibility for Saturday night, but six other squads, ranging from pretty good to very good, can’t wait to spoil that party. None of the boys teams are helpless. The worst record is 4-5. West Rowan, which has won two of the last three tournaments, is seeded last, so the Falcons get to tackle rival Carson first. That might mean close to a full house for today’s 4:30 p.m. game.

Carson arguably has as tough a draw as any No. 1 seed in tournament history. For Carson to win the championship, getting by West would only be the start. Fourth-seeded Davie County, a good 4A team looking to avenge a recent loss to Carson, is the most likely opponent in the semifinals. Salisbury, quicker and deeper than Carson and a 14-time champ, is a great bet to be waiting in the final.

It’s early, but Carson is scoring at a pace (77.6 points per game) Rowan County has not seen since West Rowan’s 2001-02 freight train put up 82.7 points per game on its way to 30-0 and a 3A state title.  The conductor of that West Rowan train is still around. Coach Mike Gurley is in his 21st year at Mount Ulla. Brian Perry, who has coached Carson all 12 seasons since the school opened, learned a lot as one of Gurley’s assistants.

This will be the fifth straight year conference rivals West and Carson have clashed at some point in the Christmas tournament. West won last year’s championship game, 87-77, over the Cougars.

Carson has won six of nine meetings with West the last three seasons. Two four-year varsity standouts — West’s Caleb Mauldin and Carson’s Jamarius Hairston — have been involved in all nine games. Mauldin, a 6-foot-8 senior, has averaged 19.3 points against Carson and scored 24.3 against the Cougars last season. Hairston has been really on or really  against West. He’s had a 30-point night against the Falcons and two 20s, but he’s also scored in single digits against West four times. Two of the worst games of his brilliant career came in losses to West.

All of Salisbury’s eight wins have come against 2A Central Carolina Conference opposition, but that includes victories against talented Thomasville and Lexington squads.

No. 3 seed North Rowan (the Cavaliers’ only loss was to West Rowan) and No. 5 North Stanly will be out to prove that they’re good teams, not just good 1A teams.

No. 7 South Rowan and No. 6 East Rowan have been down for years, but both appear headed for double-digit wins this season. It’s probably a stretch to see  them winning the tournament, but both are capable of an upset.

The girls field looks a lot less complicated. It will be a surprise if top-seeded defending champ Salisbury (8-0) doesn’t make it to the final. It will be almost as surprising if Carson (9-1), runner-up the last two seasons, isn’t there to provide the opposition for the Hornets.

Like the boys, Carson’s girls have never won the tournament.

Third-seeded West Rowan and fourth-seeded South Rowan are probable semifinalists and darkhorse contenders for the championship. Both have the personnel to make a run, but everyone has to play well.

There appears to be a significant gap between the top four girls teams and the bottom four, but strange things have happened before. With the longer floor and the vastly different shooting background, good-shooting teams don’t always shoot well at Catawba’s Goodman Gym.

Dale’s Sporting Goods returns as the chief sponsor.  The tournament is named in honor of Sam Moir, a living legend who coached Catawba to 546 victories.

Most people refer to this event simply as the “Moir” or the “Christmas tournament,” but everyone knows what it is and where it is played.

Eight is the optimum number of teams for a basketball tournament. When you’ve got eight, no one gets a bye and no one gets a major rest advantage, plus no one has to exit the tournament early. Everyone gets to play three times. North Stanly’s appearance in this year’s tournament kept the field at eight. The Comets replaced Mooresville. The Blue Devils are hosting the Iredell County tournament.

They’ll play basketball all day for three days (Thursday through Saturday), eight games per day, with girls and boys alternating.

They’ll start at 9 a.m. If all goes smoothly, they’ll finish around 9 p.m.

Championship games will be contested on Saturday, with the girls game at 6 p.m. and the boys game following after the girls awards ceremony.

This will be the 46th tournament for the boys. It’s the 42nd holiday event for the girls, counting two in the 1990s that were played at Thanksgiving.

Outlook: The Cougars can bury 3-pointers, they can push the ball for easy points,  and they aren’t bad defensively. Carson has pretty good team size, but no one is over 6-4. Foul trouble for Hairston, Williams or White renders Carson beatable by a lot of people.

Top players: Trell Baker (15.3 ppg.) brings extreme quickness to the Salisbury backcourt. He runs the show, but he also scores when he needs to, inside or outside. Big guy Bill Fisher (13.4) may be the county’s most improved player.

Outlook: The Hornets use their quickness and depth effectively to force a frantic pace. They’ve topped 70  points five times, and they have a great chance to play for the championship. Salisbury hasn’t won the tourney since 2010.

Top players: Brevin Goodlett (15.3) and Dayjuwon Cooke (16.7) have been terrors in the early going. Cooke has scored 20-plus three times, while Goodlett has topped that plateau twice.

Outlook: North is 5-0 against 1A Yadkin Valley Conference opponents, but scored only 44 points in a loss to West Rowan. North hasn’t played since Dec. 15, so rust is a concern.

Top players: Michael Walton is scoring nearly 20 points per game. Cooper Wall will be one of the best athletes in the tournament and anticipates playing basketball, not football, in college. Owen McCormack has unusual shooting range for a 6-8 player. Jacob Hendrix and Brooks Johnson are contributing double-figure outings.

Outlook: Davie was 7-0 before dropping its last two, including a showdown on Carson’s floor. Davie played its best in a double-overtime loss to Statesville Christian in its most recent outing. It won’t be a total shock if the War Eagles give Absher his fourth tournament title and first since 2012.

Top players: Jason Doerr, 6-5, dunks a lot and scored 32 points in a recent contest with South Stanly. Point guard Bryson Childress can score as well as handle the ball and plays with serious intensity. Carson Lowder is a big guard who can score.

Outlook: North Stanly will be competitive.  The Comets beat Northwest Cabarrus and lost a tight one with A.L. Brown.

Outlook: Surging East comes into the tournament having won five of its last seven. The Mustangs were 1-9 at Christmas a year ago.

Top players: Bailey Graham (14-3) is probably the best-kept secret in the county. The guard leaps well and has posted several double-doubles. Tyrese Shaver (13.4) has been up and down — there was a two-point outing, followed by a 31-point game — but he’s talented. Jordan Oglesby has boosted South’s athleticism, while Connor Childers had made big shots. The wild card is big guy Zach Powers. If he plays well, South could knock off someone.

Top players: Mauldin is still filling it up. The 6-8 senior averages 24.6 points per game. West doesn’t have the tremendous backcourt quickness it had last year, but senior leader Martavio Rankin  (11.2) is having his finest season, and shooter Payne Stolsworth (7.4) and youngster Jay Joseph (8.8) have given Mauldin some offensive help.

Outlook: West has beaten North Rowan and lost by five to Davie, so the Falcons are dangerous.

Outlook: There were doubts about the Hornets until they took care of  Ledford and East Davidson back-to-back. Now the Hornets are slight favorites to capture another title.

Top players: Senior point guard Olivia Gabriel (17.1) is strong and seasoned. She’s shooting 3-pointers better and she’s been money at the foul line. Junior McKenzie Gadson (15.3) is one of the county’s most efficient scorers and is a fine rebounder.

Outlook: Carson is better than it was last year when it went 21-7. The supporting cast has changed dramatically for the Cougars, with talented sophomores and freshmen getting major minutes. Freshman Colbie’s Perry’s 3-point shooting could make the difference for the Cougars in winning their first title. Carson also has a group of seniors who provide leadership and  big-game experience. Stouder, who started her career with four wins and 70 losses, can get over the .500 mark for the first time in school history today.

Top players: Sophomore Abigail Wilson (22.3) got off to an incredible start with 20-plus points seven straight games. Senior Egypt Alexander is a 1,000-point scorer and had 24 against Cox Mill this season. Taylor Poole and Cindy Connolly have scored in double digits. Mary Sobataka has been in a shooting slump, but is capable of a big tournament.

Outlook: No one is talking about West, but an 8-1 team shouldn’t be taken lightly. Also, West usually plays its hardest against Carson, a likely opponent in the semifinals.

Top players: Janiya Downs (23.0), reigning Rowan County Player of the Year, owns a quadruple-double this season. That says a lot. Guard Tazah Hardin (14.3) is one of the county’s quickest and most spirited defenders and she can score 20 points off her defense. Riley Corriher (9.7) can shoot. Sophomore Whitley Arnott (5.4) is becoming a force in the paint on both ends.

Outlook: South is pretty good. The three losses were to winning teams, including a 49-41 setback against Carson. All three losses came early. South has won five in a row and could present a challenge for Salisbury if that matchup occurs, as expected, in the semifinals.

Top players: Freshman Makiya McDaniel has turned in games with 17 and 18 points. McKenzie Shoaf is having her best season.

Outlook: North was 0-7 entering last year’s tournament, so things are going in the right direction.

Outlook: North Stanly gets to kick off the tournament at 9 a.m. against West Rowan. Speight, who has coached more than 3oo basketball wins, will have his team ready, but the Comets don’t often face players such as Wilson and Alexander in the 1A YVC.

Top players: The Harrison sisters, Adalie (9.3)  and Hollie (8.9), lead the Mustangs. Adalie is a capable ball-handler and scored 52 points in the three games leading up to the tournament. Hollie gets points by attacking the basket.

Outlook: East always play hard, and sometimes well, despite injuries and a depleted roster. East brings a modest two-game winning streak into the tournament. East won a Moir game last year and could do it again.

Top players: Senior Trinity Hayes has developed into a prolific scorer, while sophomore Rylea Carter has also made strides.

Outlook: Davie won a tournament game last season. The War Eagles should have a good chance in the consolations on Friday and Saturday. 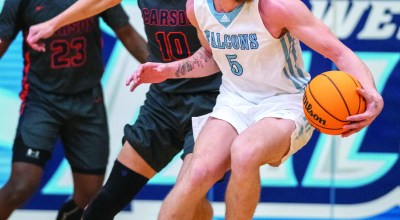