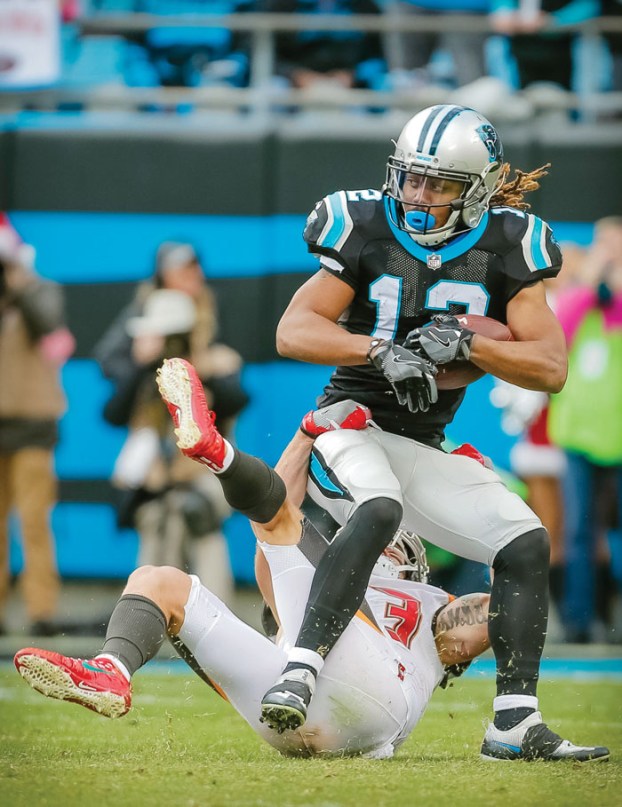 FILE - This Dec. 24, 2017, file photo shows Carolina Panthers' Kaelin Clay (12) moving away from the grasp of Tampa Bay Buccaneers' Chris Conte (23) during the second half of an NFL football game in Charlotte, N.C. The Panthers are looking thin at wide receiver as they begin preparations for the Atlanta Falcons and the NFC playoffs. For the fourth time this year, the Panthers will be looking to fill the No. 2 wide receiver spot following the season-ending injury to Damiere Byrd. (AP Photo/Bob Leverone, File)

Carolina’s Kaelin Clay says all of those nicknames apply when it comes to describing the unheralded collection of wide receivers on the Panthers’ roster.

“A lot of us were looked down upon — were guys that nobody wanted,” said Clay, one of three former undrafted rookie receivers on Carolina’s 53-man roster. “A lot of us where no names coming out (of college) — or still are. But we love it. And we like being the underdogs.”

It has been an odd season when it comes to Cam Newton’s cast of receivers.

The team surprisingly traded Kelvin Benjamin early in the season, leaving Devin Funchess as the new No. 1 receiver.

The other receiving spot has been a revolving door with rookie Curtis Samuel and Damiere Byrd playing well before injuries forced them to injured reserve. That leaves Clay, Brenton Bersin, Russell Shepard and Mose Frazier battling for the second receiving spot as the Panthers prepare to face Atlanta on Sunday with a shot at the NFC South division title on the line.

Outside of Funchess, who was a second round pick by Carolina in 2015, Carolina’s wide receivers are relatively unknown.

Clay was a sixth round pick in 2015 by Tampa Bay, but never played a down for the Buccaneers. Shepard, Frazier and Bersin were undrafted, with Bersin being cut five times before by Carolina — including earlier this season after training camp. Together, the foursome has 82 career catches for 1,083 yards and five touchdowns.

When asked what his reaction would have been if someone had told during training camp this would be the group of receivers he’d be taking into the playoffs, Panthers coach Ron Rivera let out a hearty laugh on Wednesday.

“That’s what my reaction would be,” Rivera said of his cackle.

Yet in many respects Rivera likes what he has at the position — a group of players who are hungry to prove they belong in the NFL. It’s one of the reasons the Panthers haven’t looked outside the organization for help at wide receiver, even after Byrd’s injury on Sunday.

“Everybody loves an underdog, right?” said Shepard, who joined the Panthers earlier this year as a free agent from Tampa Bay. “Life is about overcoming struggles. Those who overcome things the best, those are the names that you remember and you want to be like.”

Panthers tight end Ed Dickson said there probably aren’t many players around the league who can name more than a couple of wide receivers on the Carolina roster.

He may be right.

When asked if he could name all five Carolina wide receivers, Falcons safety Ricardo Allen replied, “Most likely not.

“I haven’t seen them since (Byrd) got hurt,” Allen said. “I think one of their guys just got put on IR? I really don’t know much about it.”

Despite the revolving door at wide receiver, Newton said the Panthers will be just fine.

“We have a lot of hungry guys in the receiving room right now that are ready to prove themselves,” Newton said. “And proving it to the outside world is irrelevant. Proving it to themselves and this team is more important, and I think that’s what they are trying to do.”

The Panthers (11-4) have already wrapped up a playoff spot.

They can still capture the division and secure a home playoff game with a win Sunday and a Tampa Bay victory over New Orleans. The Panthers also have an outside shot at a first-round bye but would need a win combined with losses by the Saints and Minnesota Vikings.

NOTES: Defensive end Charles Johnson returned from a four-game suspension for substance abuse this week and linebacker Thomas Davis is back from a one-game suspension for an illegal hit. Both are expected to play against the Falcons on Sunday, Rivera said. Guard Trai Turner was back on the field after missing the last two games with a concussion, but has not yet been cleared from the NFL’s concussion protocol.