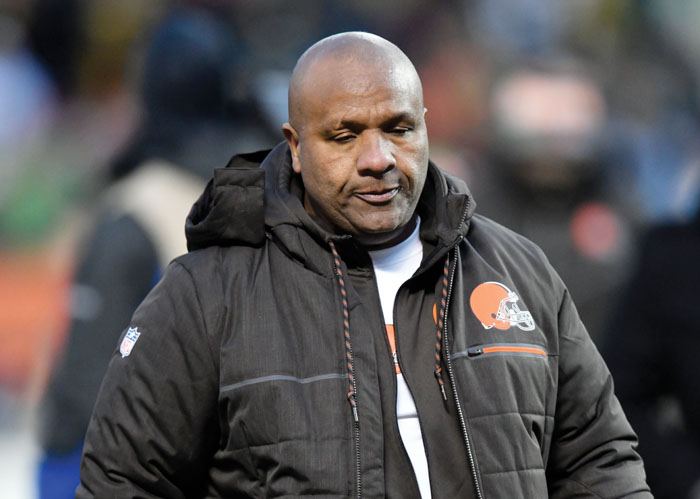 Jackson said Wednesday he’ll make good on his promise to jump in Lake Erie because of his team’s horrible record. After the Browns went 1-15 last season, Jackson vowed that if Cleveland was ever that bad again he would swim in the lake.

Well, the Browns are 0-15 heading into Sunday’s finale at Pittsburgh.

Time for a dip.

“So how many people are jumping in the lake with me?” Jackson playfully asked reporters as he walked to the podium “Obviously I’ve got to get wet. I get it. I can pick a day and get everyone out there, we’ll all be in swimsuits and trunks and snorkels and all that.”

Jackson hasn’t sent a date for his splashdown, and said he would make it at his “convenience” — code for in warmer weather.

Obviously, Jackson isn’t happy about having to make the swim. He imagined the Browns would be much better this season, but turnovers, injuries, penalties and just plain bad football has pushed Cleveland to the cusp of history.

With a loss to the Steelers, the Browns will join the 2008 Detroit Lions as the only teams in NFL history to lose all 16 games in a season.

“I don’t like it, don’t like to do it for the reason why I’m having to do it, but I have to make do on my word,” Jackson said. “I just think that’s what you do. I made a statement, I gotta back it up. That’s the type of person I am, so that’s what we have to do.”

Jackson wants to turn his swim into a positive by raising money for the Hue Jackson Foundation, which raises awareness and supports efforts to combat human trafficking.

“We’ll make it fun,” he said. “It’s for the right reason. I don’t take light to things that I say that I put out there and I like to back ‘em up. Haven’t been able to, so that’s part of it.”