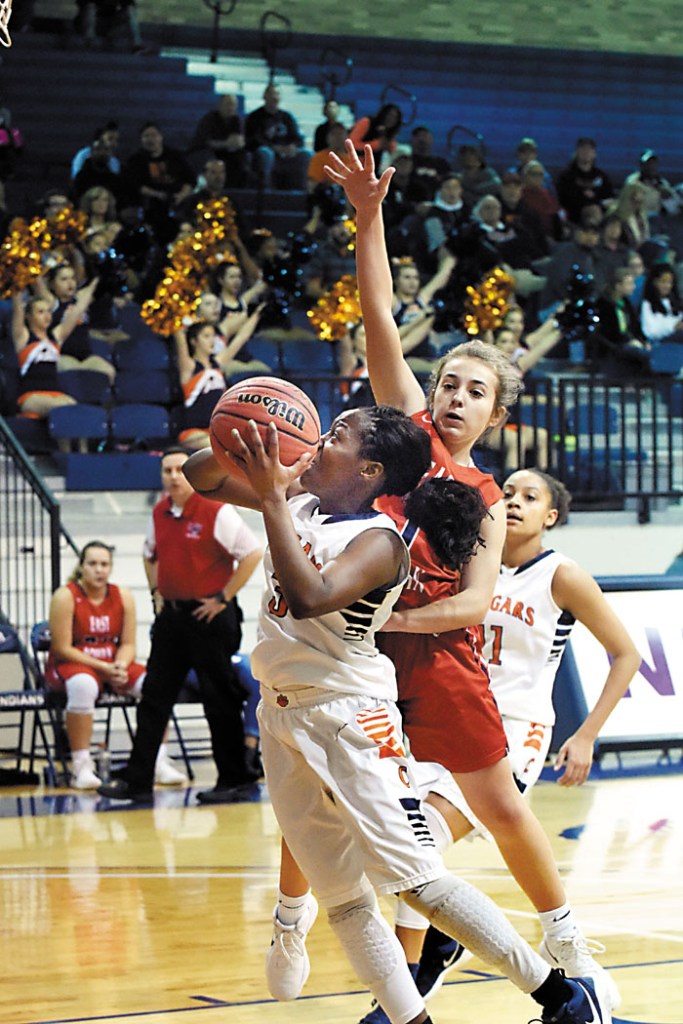 Brooke Stouder has been the Cougars’ coach since the doors open and Thursday afternoon’s 53-14 opening-round victory over East Rowan shows that this might just be the break-through year.

However, Stouder isn’t thinking about that trophy just yet.
“It’s for sure a goal for us to win the tournament, but you also have to take it one game at a time,” Stouder said. “We talked about focusing on the game at hand because you can’t make it to a championship game if you lose in the first round.”
Carson (10-1) came out strong in the first round by playing all 13 active girls on the
roster — and all contributed on the court.
East Rowan (3-8) didn’t have near as much of an attack with only
seven players on the roster. Hollie Harrison is the only senior for the Mustangs and she played a total of 31 minutes, along with her sophomore sister, Adalie.
Even with a small roster, East continued to uphold its reputation of playing hard, especially against a stacked Carson roster.
“I’m proud of how my girls played,” said Coach Kevin Holland. “We knew that Carson was deep and we came out and hustled, but we just ran out of gas.”
Caroline Houpe was the leader on the boards with seven rebounds. Houpe and Hollie Harrison both added four points apiece for the Mustangs.
The game got out of hand early on as Carson frustrated East Rowan with a full-court
press that forced a series of quick turnovers.
By the end of the first quarter, the Cougars had already scored nine points off of
turnovers by the Mustangs. Carson’s bench contributed 11 points, led by senior Maren Shumaker’s six points off of 3-for-3 shooting.
“We do like to press and we’re pretty deep, so we have a lot of people that can
contribute,” said Stouder. “Today, we were able to keep our legs fresh by playing 13
bodies. We want to play an up-tempo game and frustrate the other team to create a lot of turnovers, and we were able to do that.”
Senior guard Olivia Gabriel led the way for Carson with 14 points, all coming in the first half. She played just 12 minutes. Junior wing Mackenzie Gadson finished with nine points in only 13 minutes.

Two of Carson’s guards, senior Taylor Wiggins and freshman Ellie Wilhelm, may be
small, but they’re also mighty. The duo led the Cougars in rebounding with five boards apiece.
“Defensively, we want to keep the other team under 40 points and out-rebound them,” said Stouder. “Rebounding is something that hasn’t been a strength for us and we really don’t have any tall players, so that’s something that’s not going to come naturally.”
The Cougars accomplished both of those goals today and out-rebounded the Mustangs, 33-21.
Holland added that one of East’s goals for the tournament is to finish 2-1,
which is something that the Mustangs can still accomplish.
East Rowan will look to keep hope for that goal alive Friday morning at 9:00, against North Stanly, which lost to West Rowan on Thursday, 81-22.
The Carson girls will look to carry the momentum of a nine-game winning streak into Friday afternoon’s (3:00) semifinal match-up with the Falcons. 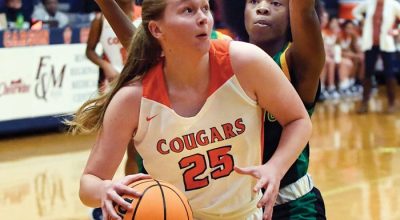 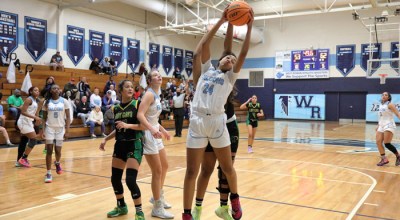