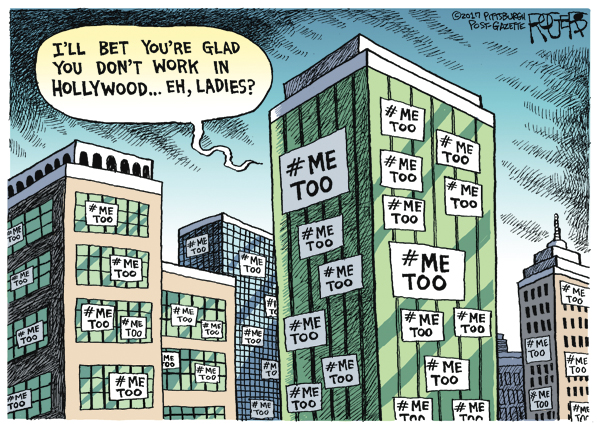 After the dizzying rush of revelations and accusations of sexual assault and sexual harassment by movie moguls, actors, senators, editors, talking heads, bible-thumping candidates for office and all manner of other powerful men, American society finds itself at a crossroads. Women, by and large, feel a little vindicated. Men feel wary.

But if you cheered when Al Franken and John Conyers resigned from the U.S. Congress, step back a bit. If you felt satisfaction and validation when Time magazine declared the “silence breakers” on sexual assault and harassment as the 2017 Person of the Year, brace yourselves. Because #MeToo is about to meet #NotMe and #ItWasMeButForgiveMe and #WhoDoTheseBitchesThinkTheyAre.

Men and the places where they hold sway (i.e., just about everywhere) are due for a major attitude adjustment. More allegations will come, and more powerful, once-untouchable men will step aside or be cast aside. And it’s hard to deny that all of this awareness is leading us somewhere positive.

However, social change to the degree many hope for — a fundamental re-ordering of how men and women relate to each other — will not occur without a lot of push-back, attempts (by men) to reclaim lost ground.

Men are feeling threatened right now. And that usually leads to circling the wagons, to consciously and unconsciously shoring up power before it can be taken away. It’s what privilege does.

A male colleague recently commented, “There isn’t a man in America today who isn’t deeply rethinking his behavior.” That’s a positive step, for sure. But who are men speaking with, and what conclusions are they drawing?

Even those who might have the best of intentions in their self-assessment are often missing the mark when they reach out to women. This is purely anecdotal and certainly not a groundswell, but some women tell me they have heard from men who now feel they may have overstepped boundaries in the past, crossed a line with something that they said or did.

Phone calls, texts and emails have been sent (yes, I received one) apologizing or just touching base to ask, “We’re good, right?”

Some women view this as men covering their tails, protecting themselves from being accused later. The message I received came across as thoughtful, although I did not recall the event that this former college acquaintance referenced.

A woman I know who received one such communication fears that hiring patterns will soon reflect the decisions of men to distance themselves from women in the workplace rather than expose themselves to uncomfortable questioning of their behavior.

Sure enough, it didn’t take much looking around on the Reddit online forum The Red Pill before I found this gem:

“Avoid hiring and promoting feminists if you can do so legally. Women, especially radicalized feminists, are dominating the workforce and taking control of companies, political positions, etc., due to policies that wildly favor them.”

Of course, you should consider the source. The Red Pill promotes itself as a place for “discussion of sexual strategy in a culture increasingly lacking a positive identity for men.” But elsewhere on the web and social media, men are promoting the idea that they are being made into second class citizens.

What men need to do now is dare to go in the opposite direction, to resist the notion that they are victims in this controversy. To listen, learn and resolve to do better.

The question on the table is men’s behavior toward women. And too many men — capable, smart, well-meaning men — are often completely unaware of how their behavior offends and disadvantages women.

What has transpired in recent months shows that women’s voices are being taken seriously in ways they weren’t in previous generations. That is a critical first step, but one that could be sidetracked if these high-profile news stories become melodramas with men as the injured parties.

Not much will have been accomplished until this shift in the dynamics of gender trickles down to affect the office administrative assistant, the co-ed working at the neighborhood shop, the single mother who is beholden to her male manager for the hours she’s assigned at the fast food restaurant where she works, and the intern trying to get some experience in her chosen industry.

We’re making progress, but we’ll have a long way to go if men insist on taking the low road.