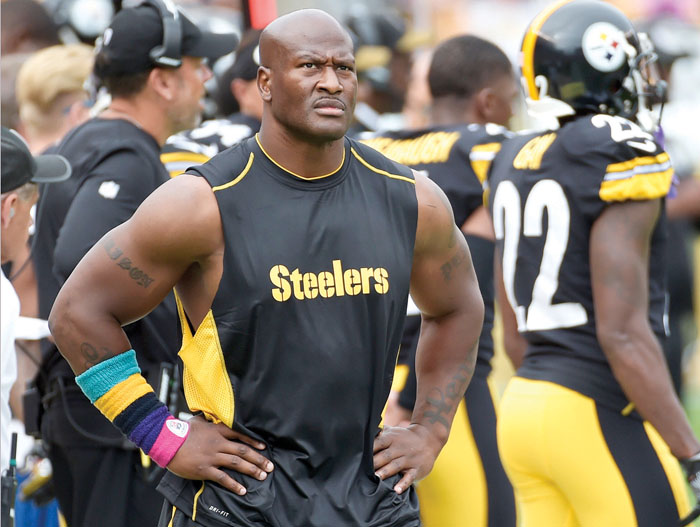 FILE - In this Oct. 8, 2017 file photo, Pittsburgh Steelers linebacker James Harrison walks the sidelines as his team plays against the Jacksonville Jaguars in an NFL football game in Pittsburgh. The New England Patriots signed Harrison, Tuesday, Dec. 26, 2017, after he was released on Saturday by the Steelers. (AP Photo/Fred Vuich, File)

James Harrison is no longer the odd man out or the oldest man in the locker room.

The ex-Steelers star signed a one-year deal with the New England Patriots on Tuesday, three days after his unceremonious departure from Pittsburgh.

The 39-year-old linebacker posted a photo on Instagram showing himself with 40-year-old quarterback Tom Brady in New England’s locker room, writing that he finally has “a teammate that’s older than me!”

The AFC North champion Steelers released the five-time Pro Bowl linebacker and 2008 NFL defensive player of the year on Saturday to make room for right tackle Marcus Gilbert, who is returning from a suspension for violating the league’s performance-enhancing substance policy.

“We make the decisions we feel give us the very best chance to win,” Steelers coach Mike Tomlin said Tuesday when asked why the team didn’t release a different player to make room for Gilbert. “We needed the people we kept. We needed to activate Marcus Gilbert. Really, it’s nothing more than that.”

A day before, Tomlin had said following Pittsburgh’s 34-6 win over Houston that clinched a first-round playoff bye that difficult decisions such as this are “just life in football.”

To make room on their roster, the Patriots released linebacker Trevor Reilly.

Harrison, who is the Steelers’ career leader in sacks, piling up 80½ during his 14 seasons with the Steelers and 82½ during his career, briefly retired in September 2014 following a forgettable 2013 season in Cincinnati but returned when the Steelers ran into injury trouble.

He collected at least five sacks every season between 2014 and 2016 and signed a two-year deal last spring that would have kept him in Pittsburgh through his 40th birthday.

But Harrison’s playing time dipped significantly this season — he has just one sack. He was active in just five games despite being injury-free and with the Steelers turning more toward outside linebackers Bud Dupree and rookie T.J. Watt.

The Patriots have been thin at defensive end and outside linebacker all season.

New England, which won the AFC East for a ninth consecutive season, can wrap up the AFC’s top seed with a win over the Jets this weekend or a loss by the Steelers, who host winless Cleveland.

The Patriots and Steelers are both 12-3 and have wrapped up first-round byes. New England owns the tiebreaker by virtue of its 27-24 win at Pittsburgh on Dec. 17.

Harrison would get a chance to face his former team if the Patriots and Steelers meet in the conference championship for a rematch of last year’s title game, which New England won 36-17 on its way to its fifth Super Bowl title.