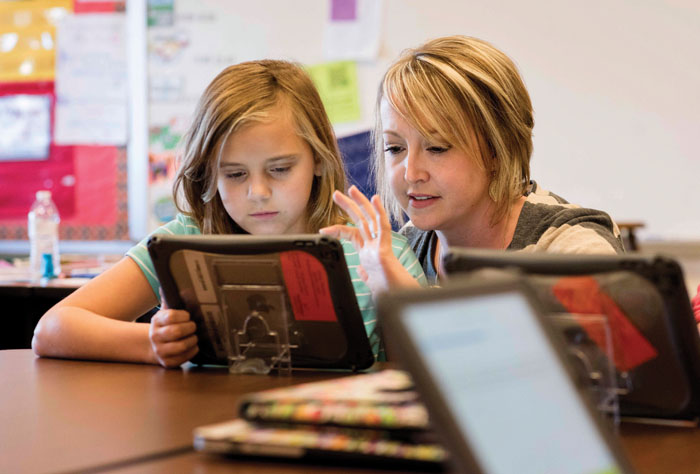 MILLBRIDGE — For Abigail Covington, being a teacher was never part of the plan.

“I was always that kid who was behind the class,” said the 2017 Rowan-Salisbury Teacher of the Year.

In fact, when the West Rowan native graduated from high school in 2000, she didn’t know what she wanted to do and spent her first year of college adrift.

“I just wasn’t quite ready for school the first time I went,” Covington remembered.

She crashed and burned her freshman year and returned home in the summer to think about her future.

Then it found her.

While she puzzled out her career options, Covington worked for Patterson Farms and helped run tours and activities for children in the community. Before she realized it, she’d fallen in love with teaching.

“Once I figured that out, I pretty much had a one-track mind,” she said.

She returned to school, this time at the University of North Carolina at Charlotte, and pursued a degree in teaching.

Covington turned her focus to math and social studies — subjects she herself had wrestled with as a student.

“When I became a teacher, I think I just identified with struggling math students because I know exactly what this feels like,” she said.

That empathy has helped define her teaching style. Now, 11 years later, Covington, 35, approaches math a bit differently than most teachers — focusing on teaching kids the “why” behind the equation or theory instead of simply how to fill out a formula.

It also means she doesn’t let students shrink to the back of the class unnoticed or let them duck out of answering questions. She gives every child her focus.

“I don’t want to give them that out,” she said.

But just last year, Covington and another teacher ran into a roadblock.

“We were teaching long division to a group of children who could not multiply,” she recalled.

It was a task that Covington said was “basically impossible” for students who didn’t know their multiplication tables, but it was a required part of the fourth-grade curriculum.

Frustrated, Covington and her co-worker discussed the issue one day in the school hallway — just as Principal Jordan Baker walked by.

It revolutionized Covington’s view of teaching. The next day, she threw out her old lesson plans and began teaching to mastery.

“Which means I don’t move on if they’re not ready,” she said.

Covington never stands up to lecture her class; instead, she teaches in small groups. A series of different activities and exercises composed into eight separate “playlists” ping nearly every student’s struggles.

Covington’s classroom is well-organized activity. While she works with small groups of students, others work on their playlists, completing individual assignments that must be signed off on by Covington.

If they finish their work early, students are allowed to read or play games that build basic math skills. And at the end of each class, Covington clears roughly 10 minutes to help individual students with any problems or questions they might have.

The ease with which students move through the schedule and stations belies the months of work and late nights Covington has put into making her system work. But in the end, she said, it’s been worth it.

“My kids are getting what they need,” she said. “The downside is that some of them won’t get to everything.”

So while some students may be faced with unfamiliar concepts on things like state tests, Covington knows that when children leave her classroom, they do so confident in what they have learned.

But for this teacher, the future is still open.

“I still don’t know for sure what I want to do when I grow up,” she joked.

Covington serves as the site support leader at Millbridge Elementary School, offering advice and support for beginning teachers. It’s something she enjoys almost as much as teaching her students.

Being named Teacher of the Year “opened (her) eyes beyond the walls of the classroom,” Covington said.

If possible, she’d like to continue supporting beginning teachers.

Teaching, she said, is a job that always has something new to offer.

“It matters every single day,” she said. “… It’s a lot of purpose. It’s very purposeful every day.”

Covington and her husband, Drew, have two children, Cooper and Caroline.