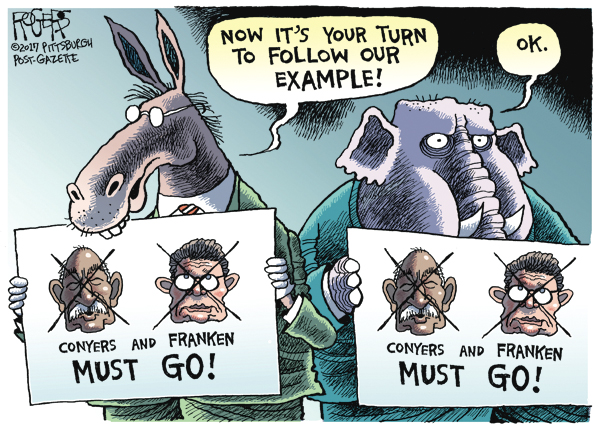 D.G. Martin: Are we really interested in politicians’ character?

Can Democrats tar President Donald Trump and other Republicans for their support of U.S. Senate candidate Roy Moore? Will they pay a penalty for endorsing a man who was credibly accused of improper, indefensible exploitation of young women?

President Trump pulled out the stops to support Moore and urge Alabama voters to elect Moore, because, as he tweeted, “Democrats refusal to give even one vote for massive Tax Cuts is why we need Republican Roy Moore to win in Alabama. We need his vote on stopping crime, illegal immigration, Border Wall, Military, Pro Life, V.A., Judges 2nd Amendment and more. No to Jones, a Pelosi/Schumer Puppet!”

Democrats hope to use the support Trump and the other Republicans gave for Moore to undercut them in future elections. “Republicans,” they will say, “support the election of child molesters and sexual harassers if they need their votes in Congress.”

Senate Democrats bolstered this righteous position when they forced the resignation of Minnesota Senator Al Franken after several women complained about his inappropriate conduct.

More than 30 years ago I found myself in the middle of a similar debate. The recent publication of a new book about the political career of a former South Carolina congressman reminded me how I got involved.

“Capitol Steps and Misstep — The Wild, Improbable Ride of Congressman John Jenrette,” written by former Jenrette top aide John Clark, tells a remarkable story. In the mid-1970s Democrat Jenrette was a popular, progressive, ambitious politician, whose early success and potential for national prominence could have been a model for the South Carolina Congressman Frank Underwood character, played by Kevin Spacey in Netflix’s “House of Cards.”

In a review of the new book in The State newspaper, John Monk writes that it “brings to life a congressman whose sexual exploits were the stuff of legend and whose drinking and money issues made him easy prey to the FBI and its hidden cameras.

“Jenrette’s sexual exploits — including his sleeping with another woman on his wedding night — are described in depth, as are his struggles with alcohol, his questionable beachfront land dealings and the FBI. Clark’s detailed account of how Jenrette fell victim to an aggressive FBI sting called Abscam leaves no doubt that he believes heavy drinking and huge debts made the congressman vulnerable to an entrapment that was both predatory and unfair — but also legal.”

My connection to the Jenrette matter arose in 1984 when I was running for Congress, as described in a 1988 book, “Honest Graft: Big Money and the American Political Process,” by Brooks Jackson. In a chapter titled “We’re Not Really Interested in Character,” my naïve conversation with a representative of a liberal political action committee in Washington began when he told me “the kind of candidates they liked included former Congressman John Jenrette.”

Quoting me, the book continues with the question I asked. “How could you support him so enthusiastically, given his character and the things that everybody knew about him?”

Even today, I am not sure which one of us was right.

If a bad person’s vote were necessary for the success of a good cause in Congress, what would you do?

Character or the vote?

Sergei Magnitsky, a Russian tax lawyer, died beaten and alone in a Moscow prison cell eight years ago. He was... read more