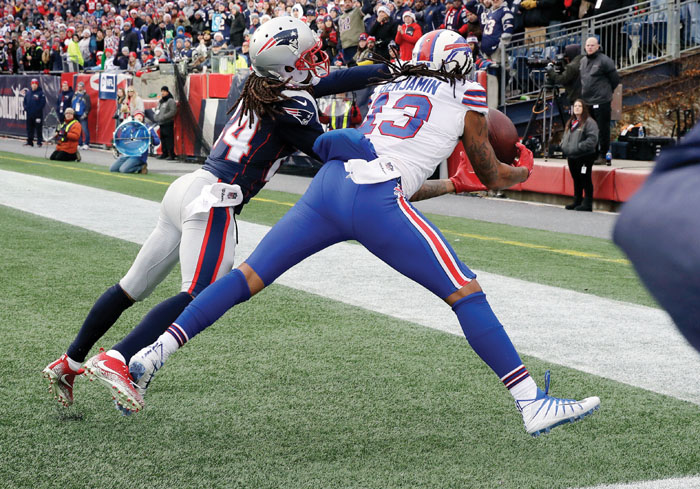 The usually low-key owner went out of character Tuesday during an appearance on Buffalo’s WGR-Radio by specifically referencing NFL officiating chief Al Riveron, and saying he intends to raise his concerns with the league.

“I don’t know what’s going on, but we have to fix it,” Pegula added. “I’m not saying this as the owner of the Bills. I’m saying it as a football fan. We can’t have stuff like this happening in our league.”

As for Riveron, Pegula said the league official might be the only one in the nation who agrees with the call being reversed.

Pegula then provided a blunt response when asked whether he expects the conversations at the league office to be unfriendly.

“Well, you know, if it’s unfriendly from the other side, I can dish back unfriendly, too, because it’s a little upsetting” he said.

Benjamin was initially ruled to have had both feet down in the end zone in catching a 4-yard pass that would have put Buffalo up 17-13 in the final seconds of the first half of a 37-16 loss on Sunday.

The official’s call, however, was reversed upon a video review, with referee Craig Wrolstad saying replays revealed Benjamin did not have control of the ball when his first foot hit the turf. The Bills instead settled for a field goal in tying the score at 13.

Former NFL officiating VP Mike Pereira criticized the league by saying the official’s call was incorrectly reversed by “someone in a suit in an office in New York.”

Bills coach Sean McDermott reiterated what he said immediately following the game by saying he remains at a loss by the call being reversed even after spending the past few days consulting with league officials.

However, McDermott added, he and his players need to turn their attention to a critical season finale at Miami on Sunday with the Bills’ slim playoff chances hanging in the balance.

The Bills (8-7) are still in contention, but need help from other teams to end a 17-year playoff drought. Buffalo needs to beat its AFC East rival and have either Baltimore (9-6) lose to Cincinnati, or have both Tennessee (8-7) and Los Angeles Chargers (8-7) lose their games.

“We must turn the page,” he said. “We’ve got to be mentally disciplined and focused on what we can control, and that’s ourselves and this week.”

McDermott’s message didn’t prevent offensive coordinator Rick Dennison from eliciting a laugh when asked if he understood what constituted a catch.

“I’m not at liberty to say,” Dennison said.

The NFL’s review process is taking heat for a second consecutive week in which a touchdown was erased against the Patriots.

In a 27-24 win over Pittsburgh on Dec. 17, officials initially ruled that Steelers tight end Jesse James scored in making a 10-yard catch with 28 seconds left. The call was reversed upon review when it was ruled James lost control of the ball after crossing the goal line.

Pegula wouldn’t be the first Bills owner to question a call that went against Buffalo at Foxborough, Massachusetts.

The NFL fined late Hall of Fame owner Ralph Wilson $50,000 for questioning two calls — including a pass-interference penalty with no time remaining — that led to Patriots beating Buffalo 25-21 in 1998. Pegula and his wife, Kim, purchased the Bills from Wilson’s estate in 2014.

On Benjamin’s touchdown, Pegula said he’s heard from numerous observers who disagreed with the reversal.

“Everybody I talked to, and they’re not Bills fans, they’re not necessarily anti-Patriots, they’re all baffled by that call,” Pegula said. “It just wasn’t consistent.”