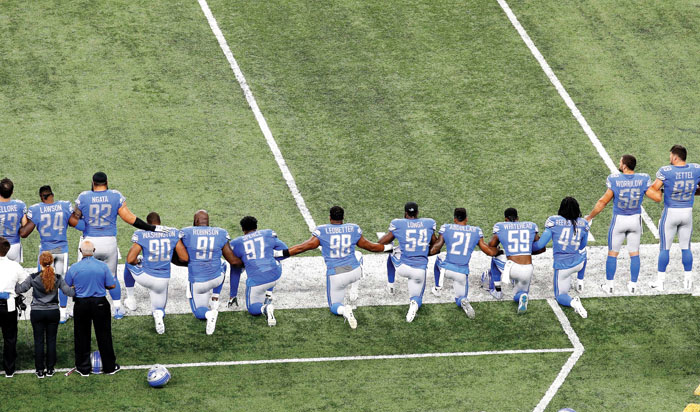 FILE - In this Sept. 24, 2017, file photo, Detroit Lions players take a knee during the national anthem before an NFL football game against the Atlanta Falcons in Detroit. President Donald Trump's feud with the NFL about players kneeling during the national anthem is the runaway winner for the top sports story of 2017 in balloting by AP members and editors. (AP Photo/Paul Sancya, File)

DENVER (AP) — President Donald Trump couldn’t stand NFL players kneeling in protest during “The Star-Spangled Banner.” His angry call to fire players who didn’t stand for the national anthem rekindled both the national debate over the issue and the movement itself.

Former San Francisco 49ers quarterback Colin Kaepernick initiated the protests last year to bring attention to racial inequality and police brutality against minorities. Kaepernick is currently out of football, and relatively few players were demonstrating this season before the president stoked his feud with the NFL .

During a speech at a political rally in Huntsville, Alabama, in late September, Trump said, “Wouldn’t you love to see one of these NFL owners when somebody disrespects our flag to say get that son of a bitch off the field right now, out, he’s fired, he’s fired.”

Criticism from players, owners and fans — and some praise — greeted Trump’s remarks, which sparked a massive show of defiance that weekend, with more than 200 players protesting by choosing not to stand for the national anthem.

The president’s feud with the NFL is the runaway winner for the top sports story of 2017 in balloting by AP members and editors, easily outdistancing the corruption scandal engulfing college basketball and the Houston Astros winning their first World Series and lifting the spirits of a city devastated by Hurricane Harvey.

The year was marked by sex scandals, Russian doping and the U.S. failing to qualify for soccer’s World Cup . Tom Brady engineered a record-breaking comeback as the New England Patriots rallied from a 28-3 deficit to beat the Atlanta Falcons in the first Super Bowl to go into overtime and Clemson mounted a last-second comeback to beat Alabama for the national championship.

All of that was overshadowed by the NFL protesters and the president’s dive into the debate.

Some allied groups were quick to call for an NFL boycott following Trump’s remarks about the protesters.

The president’s attack on athletes turned the anthems — usually sung during commercials — into must-watch television shown live by the networks and streamed on devices.

In addition to the protests, some players and coaches locked arms in a show of unity, which Trump said was a display of “solidarity” of which he approved. But he pushed back against the suggestion that his critique could inflame racial tensions, arguing: “This has nothing to do with race. This has to do with respect for our country.”

But critics of the president said Trump’s comments had a lot to do with race.

“It just amazes me with everything else going on in this world, especially involving the U.S., that’s what you’re concerned about, my man? You’re the leader of the free world and this is what you’re talking about?” Miami Dolphins safety Michael Thomas said. “So, as a man, as a father, as an African-American man, as somebody in the NFL and one of those ‘sons of bitches,’ yeah, I took it personally.”

A handful of white players didn’t stand, but the vast majority of those actively protesting were black.

“We felt like President Trump’s speech was an assault on our most cherished right, freedom of speech,” said Denver Broncos star Von Miller, who normally steers clear of politics and social issues.

Trump supporters argued the president was not targeting African-Americans but instead was simply expressing patriotism.

“Me taking a knee doesn’t change the fact that I support our military, I’m a patriot and I love my country,” Buffalo Bills linebacker Lorenzo Alexander said. “But I also recognize there are some social injustices in this country and today I wanted to take a knee in support of my brothers who have been doing it.”

Although the protests returned to pre-Trump criticism levels as the season wound down, the president’s feud with the NFL sparked a firestorm that reached across financial and cultural landscapes, further splitting a nation already divided over politics and social issues.

Kaepernick sued the league, alleging team owners conspired to keep him out in response to his activism. Hall of Fame Cowboys owner Jerry Jones suggested he’d fire any player who knelt even though none of his had done so.

Papa John’s Pizza founder John Schnatter criticized Goodell over his refusal to force players to stand and blamed the protests for a slowing sales growth at one of the league’s biggest sponsors and advertisers. The company apologized for his comments following praise from white supremacists and said recently that Schnatter is stepping down as CEO in 2018.

The NFL, already dealing with a dip in TV ratings, the ongoing concussion issue and a rash of star players getting hurt, recently proposed contributing tens of millions of dollars to projects focused on criminal justice reform, law enforcement and community relations and education.

“I give kudos to the NFL for wanting to step up and help us with regard to systemic oppression,” 49ers safety Eric Reid said. “I question their intent behind it. I personally think they just want the protests to end because it’s hurting their bottom line.”

The movement and the arguments over it show no sign of abating in the new year.