A tax bill only millionaires could love 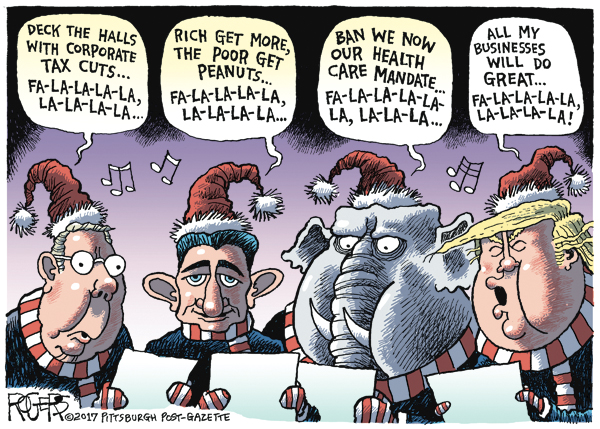 It’s risky to paint with a broad brush, but it’s still no exaggeration to say that, for most Republicans, to cut taxes is their religion. They believe God put them on earth for one reason only: to cut taxes for the rich. And Republicans in Congress just did.

Donald Trump brags that the GOP tax cut bills, passed by both House and Senate with not one Democratic vote, is a bonanza for the middle class. Not true. It’s just the opposite. An analysis by the nonpartisan Tax Policy Center found that 80 percent of the tax benefits would go to the top 1 percent, those making more than $730,000 a year. Middle-class Americans get little or nothing.

The GOP plan’s based on two assumptions, both of which are demonstrably wrong. First, that the more money you give the wealthiest Americans, the more money “trickles down” to the middle class. Conservatives have been trying to sell that chestnut ever since Ronald Reagan and it’s never worked. Indeed, the experience of the last few decades, as income inequality grows wider and wider, makes that claim ludicrous.

Second myth: that cutting corporate taxes will result in new investment, more jobs and higher wages, which, again, is pure hogwash. Business leaders I’ve interviewed agree: it is consumer demand, not tax rates, that drive their decision to expand. Besides, corporations today are enjoying the highest-ever after-tax profits and already hoarding $9.25 trillion. Where are the new jobs? Where are the higher wages?

Starting from that foundation, it’s no wonder the Republican plan’s so badly flawed and cuts taxes most for those who need it the least. The biggest beneficiaries are big corporations, whose rate is cut from 35 percent to 20 percent. Donald Trump says corporations need that tax cut because “We’re the highest developed nation taxed in the world.” PolitiFact rates that “False.” After all their loopholes and deductions, the average corporation pays 22 percent. Many pay less; some pay nothing. Yet the GOP bill makes these corporate tax cuts permanent. All individual tax cuts are temporary.

And individual tax rates are the most skewed of all. Numbers may change in the final bill, but, again, most benefits go to the very wealthy. An analysis by Vox.com shows that, beginning in 2019, a person in the bottom 10 percent gets a $50 tax cut, while a person in the top 1 percent gets a $34,000 tax cut. By 2027, when most individual tax cuts expire, Americans earning $75,000 or less will actually face a large tax increase.

In fact, the GOP bill should be called “The Donald Trump Tax Relief Act of 2017,” because nobody stands to benefit more. Among all industries, most tax breaks go to commercial real estate, where Trump still reigns. The bill slashes rates on so-called “pass-through” companies, of which he owns more than 500. The House version abolishes the alternative minimum tax, which cost Trump $31.5 million in 2005.

At the same time, middle-class taxpayers lose what few deductions they now enjoy: for medical expenses, interest on student loans, moving expenses, plug-in motor vehicles, tax preparers, some slice of state and local taxes and home mortgage deductions. On top of which, according to the Congressional Budget Office, elimination of the individual mandate under Obamacare will cause 13 million Americans to lose their health insurance.

Elimination of those middle-class benefits, we’re told, is necessary to keep the cost of the GOP tax cuts to $1.5 trillion. Which in itself would be anathema to so-called “deficit hawks” if Democrats were in charge. When it comes to piling on the deficit, however, Republicans give themselves a free pass.

This is only Round One. Round Two will be even worse. Having purposely ballooned the deficit to give wealthy Americans a big tax cut, next year Republicans will use the deficit as an excuse to gut Social Security, Medicare and Medicaid.

Meanwhile, this is the plan Republicans will have to defend in the 2018 midterm elections. According to the latest CBS News poll, only 35 percent of Americans support the GOP plan. That number will shrink as more people learn their taxes are going up, not down. My prediction: Republicans may celebrate now, but within a year they’ll rue the day they ever passed this turkey.

Bill Press is host of a syndicated radio show, CNN political analyst and author of “Buyer’s Remorse,” which is available in bookstores now.